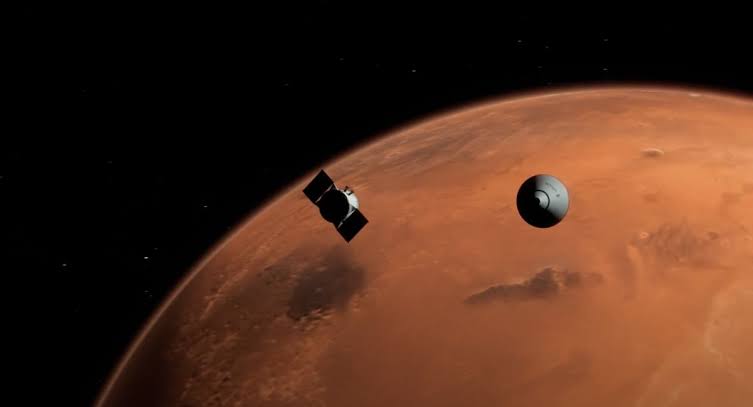 If all goes well, an Impulse Space lander will be launched to Mars in 2024 by a Terran R rocket from Relativity Space.

Relativity Space and Impulse Space, two Californian startup space companies, declared today (July 19) that they will collaborate to launch the first commercial mission to Mars in 2024, years ahead of the first potential trip by the more seasoned SpaceX, which is well-known for its long-term plans to establish a human settlement on the Red Planet.

Related: Here’s What Elon Musk Said When Questioned About The Life on Mars?

Journey To Mars Gets Going

According to Elon Musk’s company’s president and chief operating officer, Gwynne Shotwell, a commercial mission to Mars could be launched by the end of this decade.

With this proposed mission’s 2024 launch date, Relativity Space and Impulse Space would be ahead of Musk’s business. For the upcoming Mars mission, SpaceX has not yet given a precise launch date.

They may be the first commercial space enterprises to visit Mars if Relativity and Impulse are successful in carrying out their strategy.

It’s crucial to remember, though, that neither business has launched a payload into orbit as of yet. That does not imply that the foundation has not been laid. Since its founding in 2015, Relativity Space has raised over $1 billion in investment, according to Ars Technica.

The business has been a pioneer in the use of metal 3D printers to make the fuselages and engines for its rockets, a manufacturing strategy that Relativity claims lessens the complexity of the supply chain and shortens development times.

At various U.S. Air Force and NASA installations, Relativity Space currently manages or is developing a number of launch facilities and the infrastructure that goes with them.

Relativity Space has yet to launch a rocket into space, despite the fact that this construction makes it evident that it aims to play a significant role in the commercial launch services sector.

Founded in 2021, Impulse Space now employs 40 people. The company promises to provide “low-cost and nimble last-mile space payload delivery” so that clients can “access any orbit” or even reach other planets, according to their LinkedIn page.

The company, which has partnered with Relativity Space to launch two vehicles for the 2024 Mars mission, specializes in “developing orbital maneuvering vehicles designed for last-mile payload delivery,” according to its website.

Despite the fact that this cooperation will be performing its maiden mission in 2024, representatives at both businesses have expressed confidence in its ability to land a payload on Mars.

In a statement, Impulse Space founder and CEO Tom Mueller said, “This is a significant milestone for both Impulse and Relativity, as well as the global space business.

” The “glide stage,” which encloses the lander in an aeroshell to protect it from Mars entry, is one of the most difficult parts of landing on Mars. This historic mission will undoubtedly be the first of many thanks to the combined strength of our teams, expertise, and dedication.

Vision Behind The Expedition

According to his LinkedIn profile, Mueller of Impulse was a founding member of SpaceX and led its propulsion division from 2014 to 2019. Prior to that, he held the position of VP of Propulsion Engineering from 2002 to 2014.

According to Tim Ellis, co-founder and CEO of Relativity Space, the dream of humans visiting Mars is now a reality thanks to the two companies’ collaboration.

Future Ahead In The Cosmos

According to Ellis, “we believe creating a multiplanetary future on Mars is only achievable if we encourage dozens to hundreds of enterprises to collaborate toward a common objective.”

This is a huge undertaking, but if done right, it will increase the scope of human experience on two worlds within our lifetimes.

Mueller told the New York Times that while there are many doubters who believe the mission is unlikely to succeed, that level of difficulty is precisely what the company hopes to achieve.

Landing a craft on Mars by 2024 is an enormous challenge, Mueller said.
According to Mueller, “We need to do things that people don’t think can be done.”