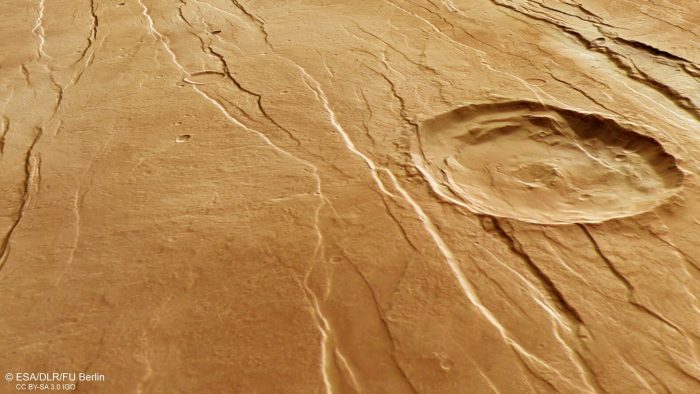 Amidst so many problems to solve. Mars is becoming clearer to us every day, thanks to the dozen functioning robots we currently have either on the red planet’s surface or in its orbit.

A unique characteristic of Mars’ geology is depicted in spectacular detail in this newest release from the European Space Agency’s (ESA) Mars Express mission.

What Are The Mysterious Groves?

The grooves, which resemble huge scratches on the planet’s surface, are part of the Tantalus Fossae fault system on Mars.

Related: Is There Any Evidence of Life on Mars? Let’s Explore

Significance Of This Image

The image is a true color, meaning it depicts what humans would see if they looked at the area with their own eyes.

The image was created from a digital terrain model of Mars and the color channels of ESA’s Mars Express’s High Resolution Stereo Camera – but it provides an amazingly clear glimpse of the enormous area.

An oblique perspective is shown above, while a top-down view of Tantalus Fossae is shown below.

What Is The Resolution Of This Image?

According to an ESA press release, these photos have a ground resolution of roughly 18 meters per pixel and are centered at about 43°N/257°E. To the right is the North.

What Are These Hollows?

Tantalus Fossae are a series of hollows or depressions that stretch along the east side of Alba Mons, a huge, relatively flat Martian volcano.

Alba Mons is the largest volcano on Mars in terms of surface area, with volcanic flow fields stretching for at least 1,350 kilometers (840 miles). Its highest point, however, is barely 6.8 kilometers above sea level.

What Caused These Fossae?

Alba Mons pushed up out of the planet’s crust, forcing the area surrounding it to become distorted and shattered, resulting in these fossae. Alba Fossae is located on the western side of Alba Mons, and is a comparable feature.

The Tantalus Fossae faults are an excellent example of a surface feature known as a grabens, according to the press release. “Each trench was produced when two parallel faults opened up, causing the rock between them to collapse into the ensuing void.”

These photographs aren’t only stunning to look at, but they could also reveal more about how Mars’ surface developed.

The impact crater in the photos has grabens going through it, indicating that it was there first. A smaller crater to the left of the troughs, which is possibly fresher, can be seen in the first two photos.

These structures are assumed to have formed one after the other, resulting in some of the troughs criss-crossing each other.

Mars Express has been orbiting the Red Planet for 18 years. We are waiting to see more of its distinct perspectives of our neighboring planets.