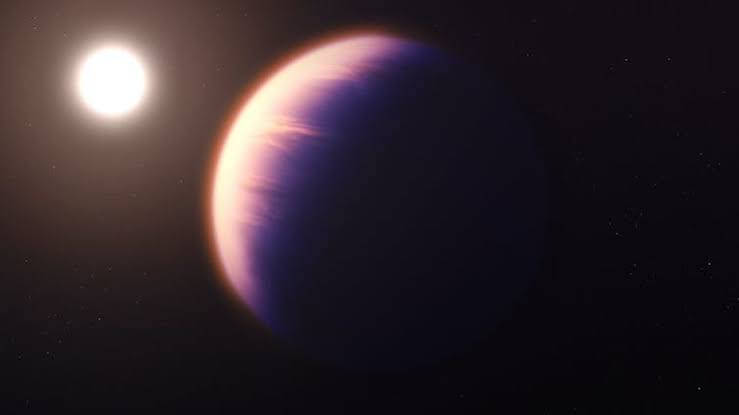 We have learned that planets and planetary systems are more diverse than we ever expected since the 1995 discovery of the first planet circling a star other than the sun. We have the chance to research how planets behave in various circumstances because exoplanets are such faraway worlds. And one of the most important pieces of the puzzle is understanding their atmospheres.

The Use Of JWST For Exoplanet Study

The biggest telescope in orbit is NASA’s James Webb space telescope released on Christmas Day 2021 and is the ideal instrument for exploring these realms. My colleagues and I have now utilized the telescope to reveal an exoplanet’s chemical composition for the first time. Additionally, the data, which was made public in preprint form (meaning it has not yet been published in a peer-reviewed journal), points to some unexpected conclusions.

Some of the light is absorbed by gasses in the atmosphere, leaving a mark on the starlight in the form of a loss of brightness at particular colors or wavelengths. Since JWST is an infrared telescope, it is especially well suited for studying exoplanet atmospheres. Instead of absorbing visible light, the majority of gasses in the atmosphere, including water vapor and carbon dioxide, absorb infrared.

“I’m a member of a global group of exoplanet researchers utilizing JSTW to investigate WASP-39b, a planet around the size of Jupiter. This world, unlike Jupiter, orbits its star in a few days, therefore it is being roasted at temperatures of almost 827°C. This provides us with the ideal opportunity to investigate how a planetary atmosphere responds to high temperatures.”

The most comprehensive spectrum of this fascinating planet has been recovered by JWST. In actuality, our research serves as the planet’s first chemical atlas.

We already knew that hydrogen and helium—the lightest and most prevalent gasses in the universe—had to make up the majority of the atmosphere of this massive planet. And the Hubble telescope has already found sodium, potassium, and water vapor there.

The Measure Of Water Vapour

We can now measure the quantity of water vapor and validate our initial observation. Other gasses may also exist, according to the findings, including sulfur dioxide and, surprise, carbon monoxide.

We can estimate the relative proportions of the gasses’ constituent elements—hydrogen, oxygen, carbon, and sulfur—based on measurements of how much of each of these gases is present in the atmosphere. We anticipate that varying amounts of these elements will be available to a baby planet at various distances from the star because planets develop in a disc of dust and gas surrounding a young star.

For WASP-39b, the ratio of sulfur to oxygen that we found is rather high. In a young planetary system, sulfur should be more abundant in rock and debris than in the atmosphere.

This suggests that WASP-39b may have experienced an unusually high number of collisions with rock fragments that contain sulfur. That sulfur would release some of it as gas.

Depending on how hot it is, different compounds react with one another differently in a planet’s atmosphere. The reactions usually balance one another out, settling into an equilibrium state where the total amounts of each gas stay steady.

For a variety of starting points, we were able to foresee the gases that would be present in the atmosphere of WASP-39b. They all anticipated that any sulfur would be bound up in hydrogen sulfide, a different gas, and none of them were able to produce sulfur dioxide.

What Is This Photochemistry?

The process known as photochemistry was the final component of the chemical jigsaw puzzle. This is when the energy from photons—packets of light—coming from the star, rather than from the temperature of the atmosphere, drives the speeds of some chemical reactions.

We didn’t anticipate photochemistry to be as significant as it has proven to be because WASP-39b is so hot and reactions often accelerate at higher temperatures.

According to the data, light splits the water vapor in the atmosphere into oxygen and hydrogen. The hydrogen would eventually be stripped away from these compounds and replaced with oxygen to create sulfur dioxide as a result of their reaction with the gas hydrogen sulfide.

In fact, the formation of the ozone layer on our own planet is a result of photochemistry, making photochemistry even more crucial on cooler, potentially habitable planets.

During its first year of operation, JWST will be observing the rocky worlds in the Trappist-1 system. All of these planets have temperatures that are closer to Earth’s than some of these measurements have already been achieved.

Some may even be at the proper temperature for liquid water to exist on the surface and maybe support life. Interpreting the Webb telescope data of the Trappist-1 system will require a solid grasp of how photochemistry affects atmosphere composition.

We need to be aware of other potential explanations for this because an apparent chemical imbalance in an atmosphere may suggest the presence of life. The WASP-39b chemical inventory has demonstrated the JWST’s potency as a tool. Stay tuned as exoplanet science enters a very exciting new phase.