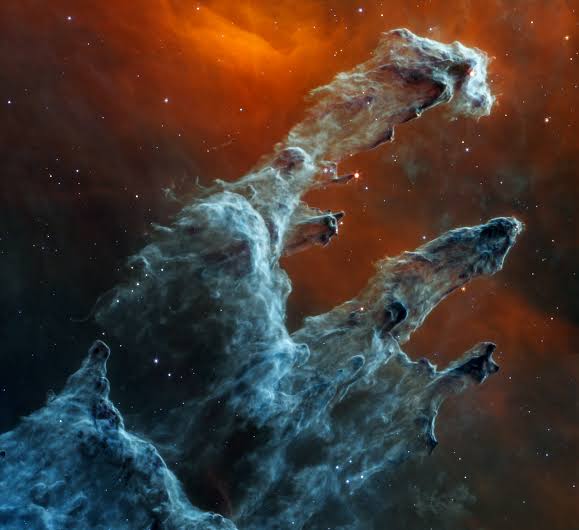 The US space agency NASA has released a second image of the well-known “Pillars of Creation” that was captured by the brand-new super-space telescope James Webb. This week, the active star-forming zone is depicted by Webb’s Mid-Infrared Instrument (MIRI).

They are the focus of every large telescope in an effort to comprehend the physics and chemistry at work as new stars are formed in massive clouds of gas and dust.

How Is This Image So Unique?

The newest, largest, and best space observatory to see the scene is Webb, with its 6.5m-wide mirror and high-fidelity sensors. The new MIRI image’s choice of wavelengths for displaying the pillars is what makes it intriguing.

Normally, to better see the interior, young stars of the dusty columns, astronomers would filter the light to make them appear almost translucent. The NIRCam image highlighted the thousands of young blue stars that are present by doing this.

And MIRI is able to advance this strategy even farther. However, in this instance, the filtering has chosen the wavelengths where the dust actually shines.

According to Prof. Mark McCaughrean, the senior advisor for science at the European Space Agency, “defying expectations that mid-infrared observations let you see through dust, this stunning image shows that they’re also great for studying dust and complex molecules made to glow by the intense light of nearby hot stars.”

This helps highlight some of the intricate chemistry of polycyclic aromatic hydrocarbons, or PAHs. These compounds contain a lot of carbon. They can be found in car exhaust as well as on burned toast. The carbon composition of the Universe is assumed to be enriched by PAHs created by stars.

In a joint effort with NASA’s Jet Propulsion Laboratory, scientists and engineers from ten European nations—led by the UK—developed MIRI. Prof. Gillian Wright is one of its co-principal investigators.

“Simply said, it’s exciting to see how MIRI is doing. It’s creating knowledge in science that is completely new to us “the UK Astronomy Technology Center’s director told BBC News.

“This new image is comparable to the pillars’ “skin,” if you will. Where the stars are starting to blaze through the dust, you can discern filamentary structures. Additionally, you can make out areas that are dark because they are so chilly and thick that MIRI cannot even illuminate them.”