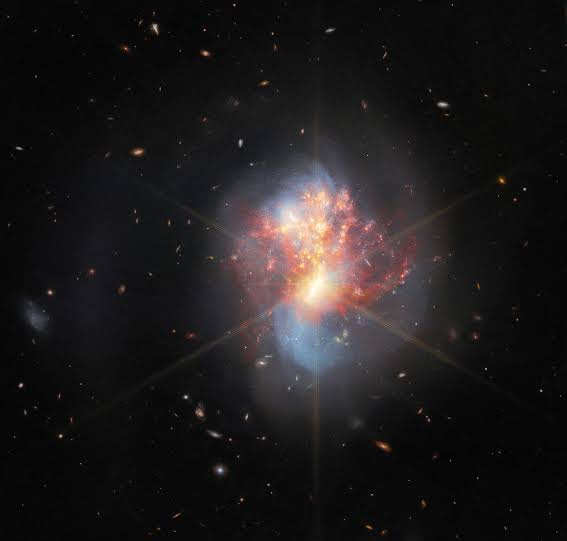 This picture of IC 1623, a pair of interfering galaxies that are about 270 million light-years away from Earth in the constellation Cetus, was taken by the NASA/ESA/CSA James Webb Space Telescope. Galaxy merger is the term for what is happening to the two galaxies in IC 1623 as they crash into one another. A starburst, caused by their collision, has produced stars at a rate that is more than twenty times faster than that of the Milky Way galaxy.

Because it is so bright in the infrared, this system of interacting galaxies is a good example of how well Webb can study luminous galaxies.

Three of Webb’s cutting-edge scientific instruments, MIRI, NIRSpec, and NIRCam, were employed by a team of astronomers to observe IC 1623 in the infrared spectrum.

The astronomical community as a whole will be able to thoroughly investigate how Webb’s ground-breaking capabilities can aid in unraveling the complex relationships in galactic ecosystems thanks to the abundance of information they produced as a result of doing this.

How Will This Observation Help Scientists?

Future observations of galactic systems with Webb will build on these observations. Data from other observatories, such as the NASA/ESA Hubble Space Telescope, also support them.

Astronomers have long been interested in the merging of these two galaxies, and Hubble and other space telescopes have already captured images of it. The merging galaxies may very likely be in the process of generating a supermassive black hole, and the continuous, violent starburst is causing tremendous infrared emission.

These important discoveries have been hidden from view by a thick band of dust by telescopes like Hubble. The stunning image above was created by combining MIRI and NIRCam data, but Webb’s infrared sensitivity and resolution at those wavelengths allow it to see past the dust.

The luminous center of the galaxy merger turns out to be so brilliant and compact that Webb’s diffraction spikes may be seen on top of the galaxy.

The eight-pronged, snowflake-like diffraction spikes are the result of the interaction between starlight and the physical structure of the telescope.

The spiky structure of Webb’s discoveries is particularly evident in images with dazzling stars, such as his first deep field shot.