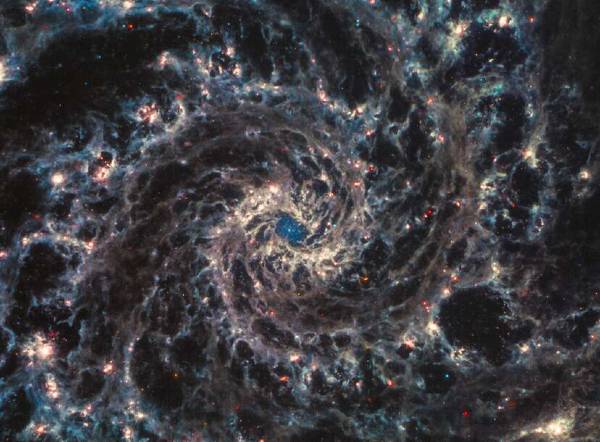 Not over a month has passed since the first image was released, and the James Webb Space Telescope keeps blowing our minds.

Even though only a few photographs have been made publicly available, citizen scientists are still sifting through the raw data to see what they can find.

Judy Schmidt is one of them; she has spent years transforming unprocessed space data into gorgeous photographs.

We now have simply jaw-dropping photos of two magnificent spiral galaxies thanks to her meticulous work. The Phantom Galaxy, also known as NGC 628, is the first. NGC 7496 is the other. Both are being observed continuously as part of the Physics at High Angular Resolution in Nearby GalaxieS (PHANGS) survey to better map the relationships between young stars and the clouds of cold molecular gas that give birth to them. Both are relatively close to the Milky Way.

The Webb’s Task For PHANGS.

One of Webb’s first tasks was to contribute to PHANGS, and the photographs already demonstrate that the newly launched space telescope is more than worth the hype.

One of the more magnificent galaxies in our sky is NGC 628. It is a spiral galaxy with what is referred to as a “grand design”: arms that are prominent, well-formed, and largely unobscured. Additionally, it is close enough to offer lots of information for research at only 32 million light-years away.

What Are These Spiral Arms Made Of?

The spiral arms of the galaxy are filled with star-forming gas that is seeded with newborn and emerging stars, according to earlier measurements. Since the beginning of the millennium, astronomers have also recorded at least three supernovae in NGC 628.

What Is A Barred Spiral Galaxy?

A barred spiral galaxy, or NGC 7496, is one that has spiral arms that stretch from a definite bar that crosses the galaxy’s core and is only 24 million light-years away. This is believed to be the result of the galactic disk’s uneven density; the denser area draws stars toward it to form bars.

As gas is directed inward towards the centers of these bars, it is hypothesized that these regions are active sites of star formation. Because it is so easy to see, a stunning barred spiral like NGC 7496 makes a fantastic observatory for studying the formation of stars.

How Are Webb’s Images Different From Hubble?

The fact that Webb’s photos differ significantly from those of Hubble is a good thing. Different light regimes are utilized by the two telescopes. While Webb sees in infrared, which can capture light shrouded by dust and gas in optical wavelengths, Hubble is primarily an optical and ultraviolet instrument.

Because Webb can observe the developing stars inside the gas that Hubble picks up, the observations are complementary. Astronomer David Thilker of Johns Hopkins University noted that “In the center of these thick molecular clouds, where we previously only had circumstantial evidence, star clusters would be visible in all their clarity.

The star clusters that have just been put together can be seen in Webb’s “star factories,” and their properties can be measured before they begin to evolve.”

The Comparison Of The Photos.

Comparing the photos reveals that Webb still detects the light gas but does so with considerably greater detail. The galactic nucleus appears as a brilliant, featureless glow in Hubble’s photos, but Webb sees right through them to reveal far more information about what is happening in the region surrounding the supermassive black holes that the galaxies are rotating around.

We are at the beginning of a daring new age in space science. The earliest galaxy to be detected, Webb already appears to have spotted it at a record-breaking distance. On arXiv, publications are appearing in a flurry. These new photos represent some of the most in-depth infrared views of spiral galaxies that we have ever seen.