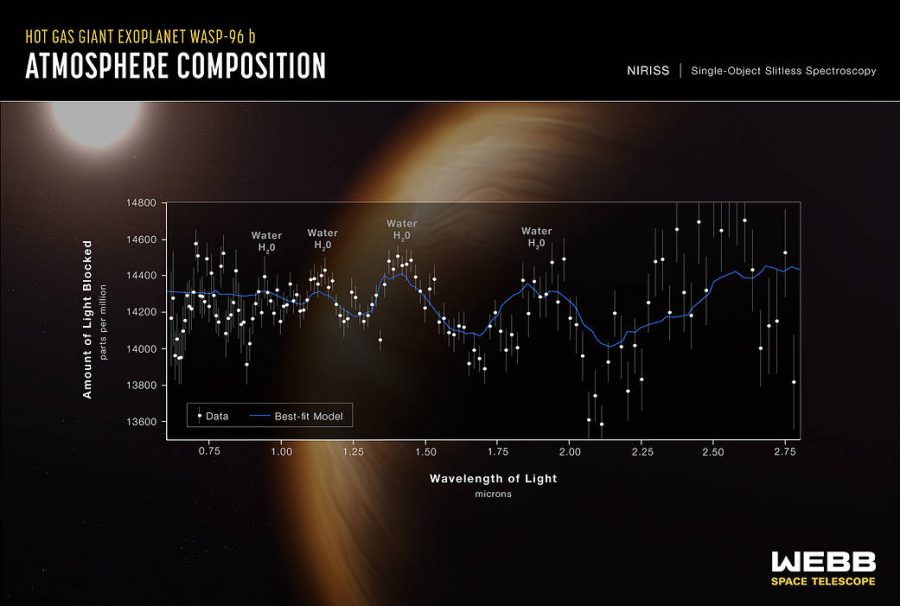 The atmosphere of a hot, puffy gas giant planet orbiting a far-off Sun-like star has been observed by NASA’s James Webb Space Telescope and also captured the unique signature of water as well as signs of clouds and haze.

The observation, which relies on minute changes in the brightness of specific hues of light to infer the existence of particular gas molecules, is the most thorough of its kind to date and highlights Webb’s unmatched capacity to study atmospheres hundreds of light-years distant.

Webb’s immediate and more thorough observation represents a significant advancement in the effort to characterize potentially habitable planets outside of our solar system, despite the fact that the Hubble Space Telescope has studied many exoplanet atmospheres over the past 20 years, recording the first clear detection of water in 2013.

There are more than 5,000 known exoplanets in the Milky Way, including WASP-96 b. It is a type of gas giant that has no direct counterpart in our solar system and is about 1,150 light-years away in the southern-sky constellation Phoenix.

How Was This Exoplanet Discovered?

The WASP-96 system was observed by Webb’s Near-Infrared Imager and Slitless Spectrograph (NIRISS) on June 21 for 6.4 hours while the planet traveled across the star. The end result is a light curve that illustrates the overall lowering of starlight during the transit, as well as a transmission spectrum that demonstrates the brightness variation of distinct infrared light wavelengths between 0.6 and 2.8 microns.

The transmission spectrum reveals details of the atmosphere that had previously been hidden, such as the unmistakable signature of water, hints of haze, and proof of clouds that were previously believed not to exist based on observations, while the light curve confirms properties of the planet that had already been determined from other observations, such as its existence, size, and orbit.

In addition to being the most detailed near-infrared transmission spectrum of an exoplanet atmosphere ever recorded, the spectrum of WASP-96 b obtained by NIRISS also spans an astonishingly wide range of wavelengths, including visible red light and a region of the spectrum that has never before been accessible from other telescopes (wavelengths longer than 1.6 microns).

Water and other important chemicals like oxygen, methane, and carbon dioxide, which are not immediately apparent in the WASP-96 b spectra but which might be observable in other exoplanets planned for investigation by Webb, are particularly sensitive to this portion of the spectrum.

How Will This Spectrum Help Scientists?

The spectrum will allow scientists to quantify the amount of water vapour in the atmosphere, set limits on the abundance of different components like carbon and oxygen, and calculate the depth-averaged temperature of the atmosphere. They can then use this knowledge to create judgments about the overall make-up of the planet, as well as how, when, and where it formed.

The blue line on the graph is a best-fit model that takes into consideration the data, the known features of WASP-96 b and its star (e.g., size, mass, temperature), and assumed characteristics of the atmosphere.

How Does Webb’s Design Help In Capturing High Quality Images?

Because of Webb’s cutting-edge design, the measures have an amazing level of clarity and detail. Its 270 square foot, gold-coated mirror effectively gathers infrared light. Its precise spectrographs divide light into thousands of infrared color rainbows.

Additionally, its highly sensitive infrared detectors could detect the smallest variations in light. NIRISS can distinguish the brightness in between those colors of a few hundred parts per million and able to determine color differences of only around one thousandth of a micron (the distance between green and yellow is around 50 microns).

The incredibly precise spectrum, which was created by examining 280 different spectra simultaneously during the course of the observation, only gives a little glimpse of what Webb will be able to discover about exoplanets.

Several dozen exoplanets, ranging in size from small rocky planets to giants rich in gas and ice, will have their surfaces and atmospheres studied using spectroscopy over the course of the next year. Studying exoplanets and the components that make them takes up almost a quarter of Webb’s Cycle 1 observation time.

This NIRISS observation shows that Webb has the capability to analyze exoplanet atmospheres in great detail, including those planets that may be habitable.