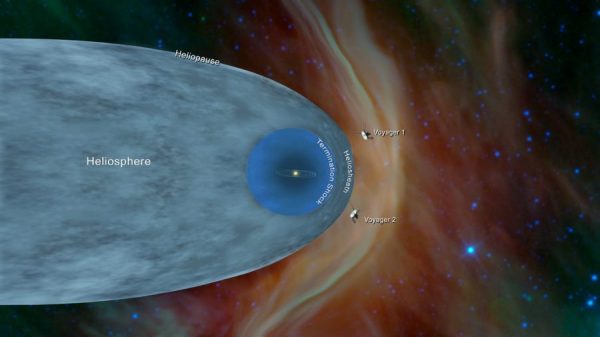 NASA’s Voyager-1 Is Sending Back Mysterious Data From Beyond Our Solar System.

Almost 45 years after its launch, NASA’s Voyager-1 is still traveling beyond our Solar System. However, this senior spacecraft is suddenly sending weird data back to its engineers, which is perplexing NASA.

What Is So Strange About NASA’s Voyager-1?

While the probe is still operational, readouts from its Attitude Articulation and Control System (or AACS), do not appear to match the spacecraft’s movements and orientation, suggesting the ship is unsure of its location in orbit, NASA said on Wednesday.

The AACS is required for Voyager to relay NASA data on its surrounding interstellar environment because it keeps the craft’s antenna aimed directly at Earth.

Suzanne Dodd, a project manager for Voyager 1 and 2 at NASA’s Jet Propulsion Laboratory, said in a statement that “a puzzle like this is sort of par for the course at this stage of the Voyager mission.”

“Both spacecraft are about 45 years old, which exceeds the mission planners’ expectations.”

Is There Any Problem In Operation Of Voyager 1 And 2?

The twin of Voyager-1, the Voyager-2 probe, is operating correctly, according to NASA. Voyager 1, which was launched in 1977 to study our solar system’s outer planets, has outlasted predictions and continues to deliver data about its voyages back to Earth.

In 2012, the pioneering spacecraft left our Solar System and entered interstellar space. It has now traveled 14.5 billion miles from Earth, making it the farthest human-made object.

Can We Know What Is Happening On Voyager?

According to NASA, Voyager-1’s AACS is providing arbitrarily produced data that does not “represent what’s really happening onboard,” according to its engineers.

Even if the spacecraft’s system data shows otherwise, the antenna appears to be properly oriented — it is receiving and executing commands from NASA and delivering data back to Earth. It added the system problem hasn’t caused the aging spacecraft to enter “safe mode,” in which it only performs necessary functions.

“The team cannot predict if this will affect how long the spacecraft can gather and transmit science data until the nature of the issue is better known,” NASA added.

Dodd and her colleagues are trying to figure out what’s causing the Earth’s robot emissary to relay garbage data.

One significant difference is that light takes 20 hours and 33 minutes to get to Voyager’s present interstellar location, thus a round-trip message between NASA and Voyager takes two days.

“However, I believe our team will find a way to resolve this issue with the AACS,” Dodd continued.