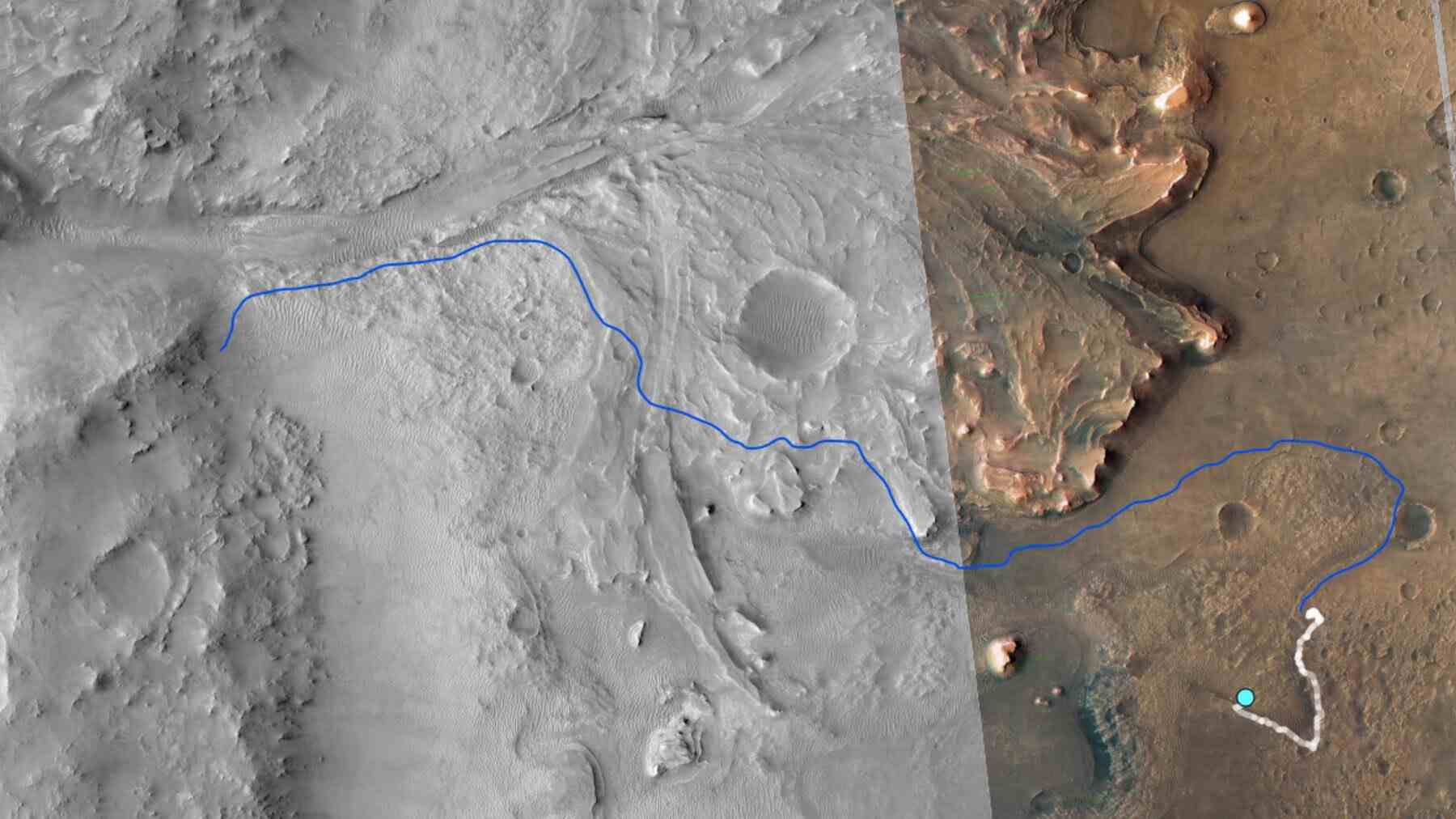 Today, on 18 February 2022, NASA’s Perseverance rover completes one year since deployment. It is still fully functional and continues to strive for success and complete its mission parameters – detecting historical Martian conditions capable of supporting life, looking for signs of previous microbial life, collecting rock and soil samples to preserve on the Martian surface, and evaluating oxygen production from the Martian atmosphere in preparation for future crewed missions.

Let us take a closer look at the adventurous journey of the NASA’s Perseverance rover.

Landing the Rover and first steps

The spaceship carrying the rover sped into the Martian atmosphere at 13,000 mph on Feb. 18. It had to pull off a series of delicate manoeuvres in just seven minutes — what NASA engineers call “seven minutes of terror” — to place Perseverance gently on the surface, and given the minutes it took for radio communications to crisscross the solar system (signals and instructions take time to reach the actual probe due to the extensive distance), mission control at NASA’s Jet Propulsion Laboratory in California were merely spectators that day.

If something went wrong, they wouldn’t have had time to correct it, and the $2.7 billion mission — to look for proof that life previously existed on Mars — would have ended in a newly carved crater.

Perseverance, on the other hand, succeeded admirably, sending home exciting video footage as soon as it landed. In addition, NASA has added to its collection of Mars-exploring robots.

Exploration of the Martian surface by the rover

One of the first things Perseverance did was deploy Ingenuity, a small robotic helicopter and the first such flying machine to take off on another planet. Ingenuity has flown several times since then to investigate the rover’s surroundings.

Perseverance’s mission accomplishment as a technical demonstration is unrelated to ingenuity, but it is teaching us important lessons about the viability of flying vehicles on other worlds. It took its first flight on 18 April 2021, two months after the rover landed.

The rover then took a detour from its original exploration plans to study the floor of the Jezero crater, where it had landed. The rocks found there were not what experts had expected.

Perseverance also demonstrated a method for producing oxygen, which would be critical once people reach Mars. When it sought to gather rock cores – cylinders roughly the size of chalk sticks — that will be transported back to Earth by a future expedition, it got into problems a couple of times. Engineers were able to resolve the issues, and most things are now running well.

The researchers came to the conclusion that the first rock they picked was so brittle that it was likely destroyed by the rover’s percussive drill. Perseverance soon succeeded in obtaining a sample the size of a bit of chalk from a separate rock.

Scientists and engineers working on the expedition are trying to figure out why the first sample, dubbed “Roubion,” crumbled to dust. Prior to launch, they had ran lengthy test campaigns on dozens of rock varieties, but none had reacted in the same way as Roubion.

So a fresh test programme was launched on Earth, complete with a field trip, a replica of Perseverance’s drill, aimed at understanding and recreating the “Roubion incident.”

Astrobiology, especially the hunt for traces of ancient microbial life, is a significant goal for Perseverance’s mission on Mars.

The rover will study the planet’s geology and climatic history, lay the route for human exploration of Mars, and be the first mission to gather and store Martian rock and regolith (broken rock and dust).

Read more: First human settlement on Mars be like

Current status of the rover

The Ingenuity drone accompanied Perseverance to the south, surveying the ground ahead of the rover. This allowed them to avoid spending time travelling to uninteresting boulders that had appeared fascinating in orbital photos.

As of this week, it has covered more than 3.4 kilometres of the Martian surface. The Jezero crater bottom is thought to represent the same olivine-rich volcanic rock that orbiting satellites have seen in the vicinity.

It might have originated before the water level in the crater rose. The rock was most likely covered in sediments from the lake, with water flowing through the sediments to fill the fissures with carbonate. Winds progressively swept the sediments away over billions of years.

The rover is on en route to this delta, where it will gather samples, conduct scans, and transmit photos of the delta basin floor. Images of what seemed to be minuscule fossils would be the most thrilling finding once Perseverance arrived to the delta.

Read: What happen if we successfully terraform mars?

Future plans of the rover

Perseverance is the first step in realising that ambition of drilling rock cores and sealing them in tubes. The rover, on the other hand, has no way of getting the rock samples off Mars and back to Earth; it will have to wait for NASA and the European Space Agency’s Mars Sample Return mission. Read: How will NASA return samples from Mars?

Perseverance will eventually drop down some of its rock samples for collection by a rover on the Mars Sample Return mission. That is to avoid the dreadful scenario of Perseverance dying and leaving the rocks it is carrying behind.

Perseverance is rare to come upon something that is unmistakably a live organism’s residue. That is why it is critical that the rocks be transported to Earth for deeper investigation, so that the ground crew may thoroughly examine the samples and learn more about the history of Mars’ surface and whether or not life was there.