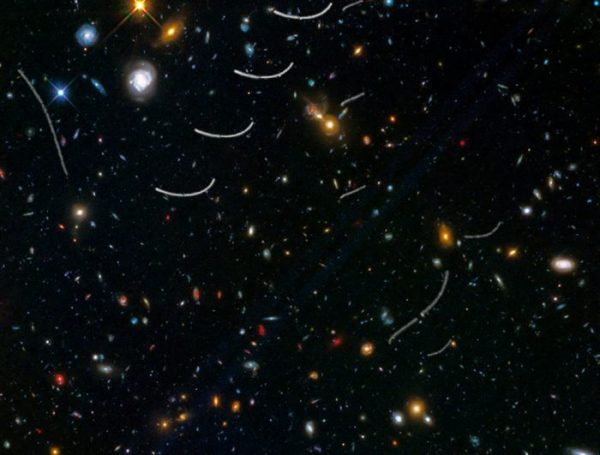 Why Are These Asteroids Traces So Important?

Similar to Known asteroids, these Asteroid’s traces may contain important information about the Solar System’s past. As more telescopes perform more observations over time, the total amount of archival data continues to grow.

Sometimes, new analysis methods or renewed efforts from scientists are required to disclose insights hidden in the data. That’s what happened in the Hubble Asteroid Hunter project.

What Is The Hubble Asteroid Hunter?

The Hubble Asteroid Hunter was launched in 2019 by a group of scientists. On the Zooniverse platform, which is a citizen science initiative. Their mission was to search Hubble data for new asteroids.

What Are The Observations Of The Hubble Asteroid Hunter?

In a recent study titled Hubble Asteroid Hunter I. Identifying asteroid trails in Hubble Space Telescope photos, the researchers published the findings of their project. The research may be found in the journal Astronomy and Astrophysics, which is available online.

The Max Planck Institute for Extraterrestrial Physics’ Sandor Kruk is the principal author. Kruk remarked in a press release that “one astronomer’s trash can be another astronomer’s treasure.”

The information they were looking for had mostly been discarded from other observational projects that weren’t focused on asteroids. The data would have appeared as “noise” in many cases, so it was removed to make the different elements stand out. However, all of this unanalyzed secondary data is still kept and accessible.

“The amount of data in astronomy archives is growing at an exponential rate, and we wanted to make use of this incredible material,” Kruk stated.

How Was The Observation Conducted?

The team looked at almost 37,000 Hubble composite pictures. They were collected using the Hubble Space Telescope’s Advanced Camera for Surveys and Wide Field Camera 3 between April 30, 2002, and March 14, 2021. Asteroid trails appear as curved streaks in most photographs because they are 30-minute long exposures.

The streaks are at the root of the problem: computers have a hard time detecting them. The Zooniverse platform and citizen scientists can help with this.

“The streaks seem curved in the photos due to Hubble’s orbit and speed, making it difficult to classify asteroid trails – or rather, telling a computer how to automatically detect them,” Sandor Kruk noted.

“As a result, we needed volunteers to help with an initial classification, which we utilised to train a machine-learning system.”

The photos were classified by 11,482 citizen scientists. Over 2 million people visited Zooniverse’s Hubble Asteroid Hunter page, and volunteers submitted 1488 positive classifications in about 1% of the photos.

The citizens’ efforts trained a machine-learning algorithm for a swift and reliable search of the remaining photos. The programme is hosted on Google Cloud, and after training, it added another 900 detections to the Hubble data, totaling 2487 probable asteroid trails.

The findings were discussed by three of the paper’s authors, including main author Sandor Kruk. They took out stuff like cosmic rays and other objects, leaving 1701 traces in 1316 Hubble photos. There were 1031 unidentified asteroid trails, with about one-third of them being known asteroids.

Follow-up observations will determine how many are newly discovered asteroids and their orbits. Some of 1031’s findings are unlikely to be validated, but the remainder will add to our knowledge of the asteroid population in our Solar System.

Significance Of This Paper

Being said these asteroids are fainter and possibly smaller than most asteroids spotted from the ground, they have escaped detection. This is the first paper to come out of the Hubble Asteroid Hunter project. The authors will use the curved shape of the asteroid trails in future articles to calculate their orbits and distances.

Why Does Asteroids Amaze Scientists?

All asteroids are relics from the early days of the Solar System, usually from before the planets formed. They act as time capsules for the early system, preserving the conditions there. That is why astronomers are so fascinated by them, and why missions have been launched to retrieve samples from asteroids like Bennu and Ryugu.

“Asteroids are relics from the birth of our Solar System,” Kruk explained. This type of archival data is increasingly being used by scholars. It is both cost effective and fruitful to scour current photos for fresh findings.

“In asteroid science, it is customary to employ archive data from imaging projects whose primary science goals are outside the Solar System. To detect and describe SSOs, several researchers have used various image archives.”

Why Is The Number Of Asteroid Important To Astronomers?

The authors say that “a complete description of the small entities in the Solar System places limits on the alternative Solar System formation scenarios, which produce concrete predictions on the size and orbit distribution of objects as a function of time.”

“Both the big planets’ migrations and collisional cascades have effects on the size and orbital distributions of asteroids that could be detected with appropriately designed observational surveys,” says the team.

Since, custom-designed surveys are costly and time-consuming. Proposals for observation face fierce competition from other academics working on different topics.

The authors explain, “Instead, we opted to create such a poll from a vast historical dataset.” Other than asteroids, Kruk hinted at anything else in the data. “However, there were some additional serendipitous finds in the historical photographs that we are currently investigating.”

He also stated that their strategy is game-changing and that they want to utilize it again.”Using a combination of human and artificial intelligence to examine massive volumes of data is a huge game-changer, and we’ll be using these techniques for other forthcoming surveys, like the Euclid telescope,” says the team.

Kruk refused to say what the other serendipitous finds in the images were. The findings, he said, are “amazing.”
“not because of rare asteroids”, but because of other data findings.