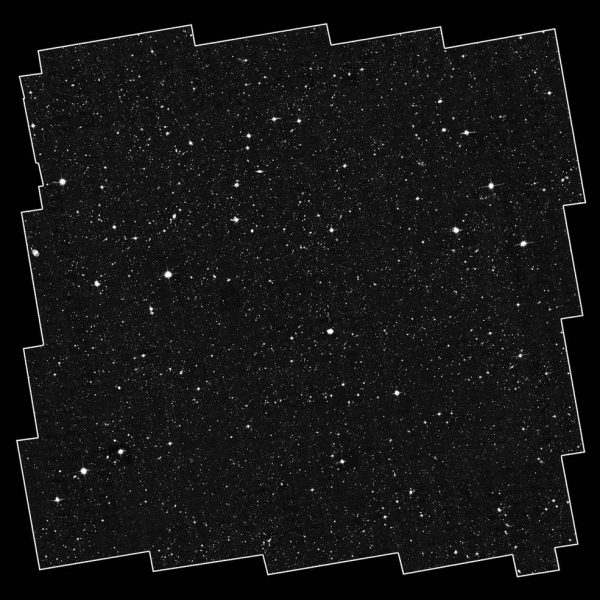 When NASA’s James Webb Space Telescope first begins its science operations in 2022, one of its first tasks will be an ardent one which is to map the earliest galaxies in the universe. This expansive and deep survey of half a million galaxies called COSMOS-Webb is the largest project Webb will tackle during its first year.

COSMOS builds itself on the legacy of the Hubble Space Telescope, but NASA’s James Webb Space Telescope will carry out the observations during its first year of operations called COSMOS-Webb. Established in 2002, COSMOS originally utilized Hubble to image an area of the sky equivalent to 10 moons wide. This program later grew larger to include ground-based observatories working across multiple wavelengths of light.

The highly ambitious COSMOS-Webb program will carry upon the previous discoveries to make advances in three particular areas of study which include Reionization Era; looking for early, fully evolved galaxies, and understanding how dark matter evolved with galaxies.

A large survey like COSMOS-Webb and the team involved in it will find many of these rare early galaxies. They plan detailed studies of these galaxies to understand how they evolved so rapidly and turned off star formation so early.

Views of the people involved in COSMOS-Webb program

Rochester Institute of Technology’s Jeyhan Kartaltepe, assistant professor of physics and co-leader of the COSMOS-Webb program, said in a statement;

“COSMOS has become the survey that a lot of extragalactic scientists go to conduct their analyses because the data products are so widely available and because it covers such a wide area of the sky, COSMOS-Webb is the next installment of that, where we are using Webb to extend our coverage in the near- and mid-infrared part of the spectrum, and therefore pushing out our horizon, how far away we can see.”

Caitlin Casey, an assistant professor at the university of Texas at Austin and Co-leader of the COSMOS Webb program, explained that:

“It’s a large chunk of sky, which is pretty unique to the COSMOS-Webb program. Most Webb programs are drilling very deep, like pencil-beam surveys that are studying tiny patches of sky. Because we are covering such a large area, we can look at large-scale structures at the dawn of galaxy formation. We will also look for some of the rarest galaxies that existed early on, as well as map the large-scale dark matter distribution of galaxies out to very early times.”

L.Y. Aaron Yung, a postdoc at NASA’s Goddard Space Flight Center tells us about the important theoretical framework that plans for and then analyze surveys:

“This summer, Webb will start searching for galaxies in the distant universe. These highly anticipated observations are the key to unlocking the secrets in galaxy evolution and our universe’s history. Depending on the specific science goal of an observing program, the best-suited survey configurations can vary a lot. For instance, galaxy surveys going after the faintest and most distant galaxies require long exposure times, ex- NGDEEP, PRIMER. But surveys for large-scale cosmological structures would require large survey areas, ex- COSMOS-Webb. Inputs from physically motivated simulations are required in developing preferable strategies to achieve these scientific goals.”

“To create a simulated universe, we first lay the foundation with dark matter concentrations or halos extracted from cosmological simulations. Dark matter accounts for 85% of the matter in the universe and has a dominant effect on the special distributions of galaxies across the universe. Then we simulate the galaxies forming inside these dark matter halos based on astrophysical processes we got to learn from the past recorded observations.”

“This figure illustrates an example of the portion of a simulated universe arranged in the shape of a cone traced by our sightlines. As light travels at a finite speed, the light that originated in the early universe has traveled billions of years before reaching us today. This effectively allows us to look back in time and see the universe billions of years into its past.”

“Our simulated universe serves as the basis to create mock observing fields that are statistically similar to the observed universe. The physically motivated models have been shown to match the galaxies observed by Hubble i.e.; Hubble ultra-deep field, and we use them to provide predictions for galaxies beyond Hubble’s capabilities.”

“We process the simulated universe further into realistic mock images by adding effects from scientific instruments and survey configurations. These data products are used to support the development of the Webb data reduction pipeline and will inform the interpretation of future observations when they become available.”

“Webb will detect, for the first time in human history, galaxy populations forming shortly after the big bang, and theory is paving the way for the search. In turn, Webb’s observations will refine our understanding of galaxies and the history of our universe.”

With more than 200 hours of observing time, the COSMOS-Webb survey will map 0.6 square degrees of the sky about the area of three full moons – using the James Webb Space Telescope’s Near Infrared Camera (NIRCam) instrument, also simultaneously mapping a smaller 0.2 square degrees with the use of Mid Infrared Instrument (MIRI).

COSMOS-Webb will study half a million galaxies with multi-band, high-resolution, near-infrared imaging, and an unprecedented 32,000 galaxies in the mid-infrared. Its rapid release of data to the public shows this survey will be a primary legacy dataset from Webb for scientists worldwide studying galaxies beyond the milky way.

Due to the location of the COSMOS field in the sky, it is accessible to observatories around the world. Located on the celestial equator, it can be studied from both northern and southern hemispheres, resulting in rich and diverse data.

From all the surveys and plans, that we observed it initiates that Webb still needs to become fully operational before COSMOS-Webb can proceed accordingly. The telescope is currently adjusting its mirror and scaling its instruments.