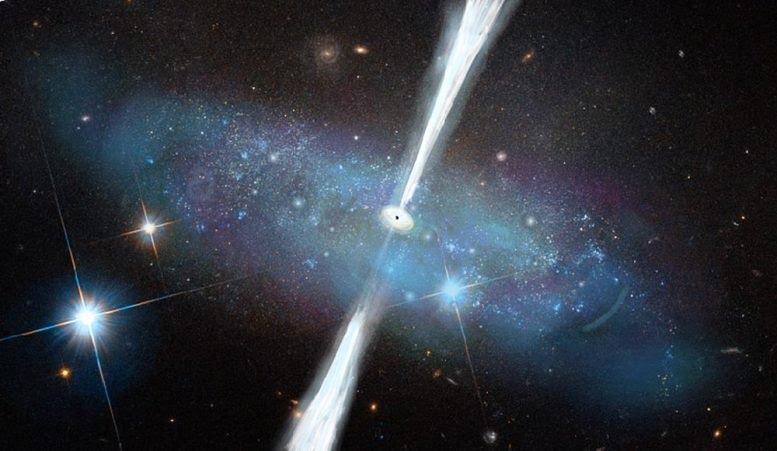 The Webb team is still working on commissioning the science equipment, which is the last stage before science operations begin in the summer.

The Event Horizon Telescope recently captured a stunning image of the black hole at the center of our Milky Way galaxy. One of the confusion in modern astronomy is how every huge galaxy got to have a giant core black hole, and how some of these black holes are astonishingly large even at the very early era of the universe.

When asked Roberto Maiolino, a member of the Near-Infrared Spectrometer (NIRSpec) instrument scientific team on how Webb will contribute in addressing some of these issues.

He answered, “The quest for primeval black holes in the early universe is one of the most exciting areas of discovery that Webb is about to open.” These are the seeds of the far more massive black holes discovered in galactic centers by scientists. Black holes with masses ranging from millions to billions of times that of our Sun can be found at the centers of most (if not all) galaxies.

“An intriguing recent finding has been the discovery of hyper-massive black holes with masses of several billion solar masses that were already in place when the universe was just 700 million years old, a small fraction of its present age of 13.8 billion years.”

How Much Time Do We Have?

According to standard ideas, there isn’t enough time to generate such hyper-massive black holes at such early epochs, hence this is a perplexing discovery. To answer this problem, some frameworks have been presented.

What Are The Possibilities?

One possibility is that black holes, resulting from the death of the very first generation of stars in the early universe, have accreted material at exceptionally high rates.

Another possibility is that primordial, pristine gas clouds, which are not enriched with chemical elements heavier than helium, could directly collapse to form a black hole with a mass of a few hundred thousand solar masses, then accrete matter to evolve into the hyper-massive black holes seen later in time.

Lastly, nuclear star clusters at the centers of infant galaxies may have formed intermediate mass black hole seeds by stellar collisions or merging of stellar-mass black holes, and then accreted to become considerably more massive.

“In this location, NASA’s Webb is ready to launch a brand-new discovery space. Within a few million years after the great bang, the first black hole seeds may have formed in the ‘baby universe.’ Webb is the ideal ‘time machine’ for learning about these ancient artifacts.

How Will NASA’s Webb Help To Detect Them?

Webb’s remarkable sensitivity allows it to detect incredibly distant galaxies, and because the light emitted by the galaxies takes so long to reach us, we will see them as they were in the distant past.

“The NIRSpec equipment developed by Webb is especially well suited to identify primitive black hole seeds. My colleagues and I from the NIRSpec Instrument Science Team will be looking for their signatures during their ‘active’ stages, when they are voraciously consuming materials and developing rapidly.

How Will Nirspec Help?

The material surrounding them becomes incredibly hot and bright during these stages, ionizing the atoms in their environs and host galaxies. The light from these systems will be dispersed into spectra, or ‘rainbows,’ using NIRSpec.

How Will We Be Able To Read The Spectra?

Specific ‘fingerprints,’ signatures of highly ionized atoms, will characterize the rainbow of active black hole seeds. The velocity of gas orbiting these primordial black holes will also be measured by NIRSpec.

Smaller black holes will have less orbital velocity. By the absence of characteristics associated with any element heavier than helium, will be used to identify black hole seeds generated in pure clouds.

“I’m excited to use Webb’s unparalleled capabilities to hunt down these black hole progenitors and learn more about their nature and genesis.”

“My colleagues and I are very thrilled to work with Webb to research for the early cosmos and the domain of black hole seeds, which is an absolutely new area,”
Roberto Maiolino, University of Cambridge’s Kavli Institute for Cosmology director and professor of experimental astrophysics