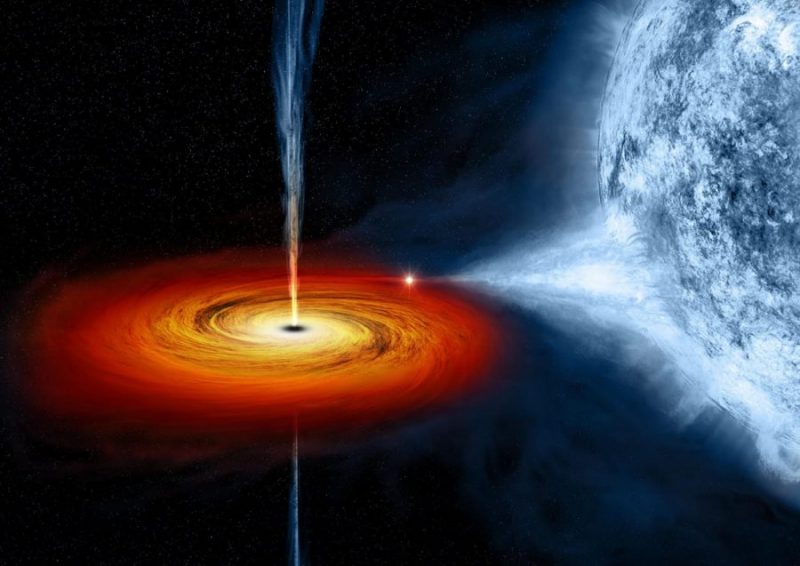 A massive and powerful black hole named J2157 aged almost as old as the universe and as big as 34 billion suns. If this black hole gets even near us, we might just get ourselves a free ride toward oblivion in no time. But have you ever wondered, what will happen if sun ever collided with a black hole?

So, before discussing about the collision of a black hole and our sun and how it would create havoc in our solar system, let’s have a look on some important things.

What Are The Characteristics Of Our Sun?

Our Sun is a 4.5 billion year old star which is a hot shining sphere of hydrogen and helium,placed in the center of our solar system. The Sun is about 150 million kilometers from Earth, and without its energy, life could not exist on our home planet, as we know it.

The sun is the largest object in our solar system. The volume of the Sun would require 1.3 million Earths to fill it. Its gravity holds the solar system together, keeping everything from the largest planets to the tiniest debris orbiting it.

The hottest part of the Sun is its core, where temperatures exceed 27 million degrees Fahrenheit (15 million degrees Celsius). The activity of the Sun, from its powerful rays to the constant stream of charged particles it emits, affects the nature of space throughout the solar system.

What are The Characteristics Of Black Holes?

Black holes form when a large star explodes into a supernova, and then collapses on its own gravity. The most common black hole, a stellar black hole, is only 16 km (10 miles) in diameter, yet they have a mass that is at least ten times more massive than our Sun.

Black holes are extremely dense. If we get too close to the perimeter of the black hole, a strong gravitational force will be exerted beyond the event horizon, turning us into a noodle.

J2157 is the fastest growing black hole and the second largest black hole in the known universe. Its event horizon has a radius of 670 astronomical units, which is equivalent to the distance between the Sun and Neptune multiplied by 22.

J2157 has the title of the most hungry black hole we know. It consumes substances at the rate of about one sun per day to stay in good shape. Now bring this monster closer to our solar system. You can imagine how this will go.

If J2157 could replace the supermassive black hole at the center of our galaxy, it would appear 10 times brighter from Earth than a full moon. This is due to an incredibly large accretion disk that the black hole picked up on its way to us.

What Would Happen If A Black Hole Collides With the Sun?

If a black hole with less than 100 million solar masses entered the solar system, it would not swallow the sun immediately; it would slowly start pulling matter out of our star until it turns into a cloud of gas.
In this case, a lethal amount of cosmic radiation can be expected to be directed to Earth.

J2157 is brighter than most of the stars in the sky. A black hole of this size and mass would instantly devour the sun. Not only that, even our planet could be torn apart by the tidal forces of our Sun while our sun is being consumed by this black hole. Also, a massive amount of cosmic radiation would constantly hit our planet.

Our solar system might also disappear into the black hole’s event horizon. Every living organism will perish instantly. But we can stay without any worries as we are at a safe distance of about 12.5 billion light-years from J2157, so it is not going to collide with our sun and destroy our solar system.