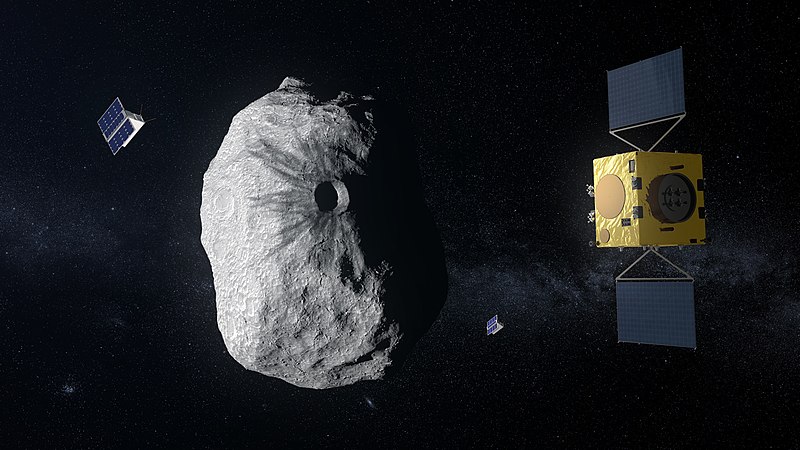 The ‘Asteroids and Meteoroids’ have been a great threat to the planet since time immemorial. Ever since the extinction of dinosaurs due to the impact of an asteroid on the Earth, scientists and astronomers now want to tackle the problem of the Near-Earth Objects (e.g. Meteoroids, Asteroids e.t.c.) that may have the probability to hit the Earth.

To achieve this goal, NASA has launched DART (Double Asteroid Redirection Test) Mission to change the trajectory of the asteroid.

What is an Asteroid?

An asteroid is a huge piece of rock (smaller than the planets, often called mini-planets) that revolve in space orbiting the sun.

Asteroids typically have large sizes than pebbles and rocks on Earth. Apart from that, if an asteroid or meteor hit the Earth, then its impact on the Earth may cause huge destruction and devastating changes in the climatic conditions that no eye has ever seen, nor anyone could imagine.

The main possible reason for the extinction of Dinosaurs in the past is associated with the impact of the asteroid or comet on the Earth.

According to the report by NASA, the Dinosaurs lived on the Earth for about 165 million years and become extinct 65 million years ago. The scientists at NASA say, “A single asteroid or a comet would have hit the Earth and caused huge destruction making the dinosaurs extinct.”

The scientists also say that multiple asteroids and comet attacks over many years would also have been the possibility of Dinosaurs extinction.

The destruction and massacre caused by the asteroid may well be understood from the extinction of dinosaurs millions of years back.

Humans are also at the same risk just like the dinosaurs. However, since humans are highly intelligent and sensible, they can combat threats easily.

What is DART mission?

The DART (Double Asteroid Redirection Test) is the collaborative project of ‘NASA’ and ‘John Hopkins Applied Physics Laboratory (APL)’.The mission aims to test the successful impact of the spacecraft with Didymos ‘B’ (Secondary Asteroid revolving around primary asteroid Didymos ‘A’) to achieve the trajectory change and change in the orbital period.

As said above, we are also at the great risk of being under attack by an asteroid or comet in the near future. However, the probability is very low. Still, prevention is always better than cure, and thus NASA and other space Organisations are trying various tests to prevent the planet from the upcoming threats.

The “Chelyabinsk Meteor Attack” that happened on Feb 15 2013 in Russia was the most devastating and destructive meteor that attacked the city with a velocity of 69000 km/h.

The meteor is said to be 20m in diameter according to various authentic News reports. The meteor struck with so power and might that most of the buildings and the glass panes of the building in the city were shattered.

Luckily, no individual was injured, however, the destruction done was enough for the people to realise the need to tackle the upcoming threats.

The ESA (European Space Agency) and NASA (National Aeronautics of Space Administration) earlier had independent plans to test the technology to achieve the trajectory change of an asteroid.

Later, the AIM orbiter was cancelled and the scientists decided to go with the DART spacecraft. The DART spacecraft’s impact monitoring will be done from the ground-based telescopes and RADAR.

NASA approved the project for final design and implementation in 2018, and also announced that SpaceX Falcon 9 rocket will be used to launch the DART spacecraft.

The DART spacecraft will be launched on 24 November 2012 (as per plan) through the SpaceX Falcon9 rocket.

Also read: What would happen if asteroid Apophis hit Earth in 2022?

The main aim of DART (DOUBLE ASTEROID REDIRECTION TEST) is to test the technology for planetary defence from Hazardous asteroids.

The goal will be achieved by sending the spacecraft and smashing it into a target secondary asteroid moonlet (Didymos B). The Primary asteroid (Didymos A) is about 780m in diameter, while the secondary ‘Didymos B’ (which is the test target) is around 160m in size.

The spacecraft will also employ DRACO (an onboard Camera) and navigation software for the aircraft.

Thus, the spacecraft to carry out the test is basically the impactor that will hit the asteroid at approx. 6.6km/s causing a small change of one per cent in the velocity of the ‘Didymos’ moonlet. This will bring a trajectory change in the secondary asteroid moonlet ‘Didymos’, along with the shift of several minutes in the orbital period of ‘Didymos’.

The actual velocity change will be analysed later by ‘Hera (spacecraft designed as a part of ‘Asteroid Impact and Deflection Assessment (AIDA)’.

Which is the main space agency behind DART mission?

When is DART expected to be launched?

When did DART mission start?

Ans. NASA approved the project for final design and implementation in 2018, and also announced that SpaceX Falcon 9 rocket will be used to launch the DART spacecraft.

What will be the duration of DART mission?

Ans. DART mission will be of approx. twelve (12) months.

Why Didymos ‘B’ is an ideal asteroid for testing the DART system?