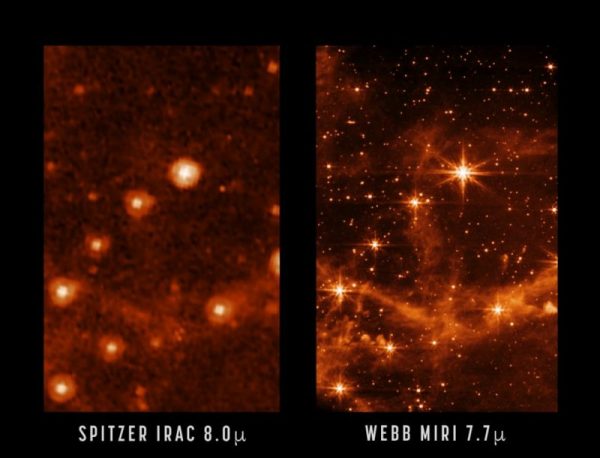 Project officials stated in a news teleconference on Monday that all four science instruments on NASA’s James Webb Space Telescope have achieved “perfect alignment” ahead of the telescope’s official appearance this summer (May 9).

According to CBS News, NASA’s Goddard Space Flight Center in Maryland’s Michael McElwain, James Webb Space Telescope project scientist, said, “I’m thrilled to report that the telescope alignment has been completed with performance even better than we had anticipated.”

“We are able to achieve nearly flawless telescope alignment. There are no changes to the telescope optics that would boost our science performance significantly.”

Related: How Does Webb Telescope Works Effectively Despite Getting Hot and Cold?

What Was The Image That Was Taken By Webb’s MIRI?

NASA released a preview image obtained by Webb’s Mid-Infrared Instrument, or MIRI, to demonstrate the telescope’s readiness. The new image compares Webb’s observations of a nearby galaxy to observations made earlier by NASA’s now-retired Spitzer Space Telescope.

While the Spitzer image shows a blur of seven or so nearby stars in the Large Magellanic Cloud (a satellite galaxy orbiting the Milky Way), the Webb image captures the foreground stars in sharp detail, offset by wispy clouds of interstellar gas and hundreds of background stars and galaxies in “unprecedented detail.”

The Webb telescope’s instruments have been aligned, and it now awaits a final instrument calibration before it can begin examining distant stars later this summer, according to NASA.

Related: Solar System is All Ours To Explore. How Webb Will Help Study That?

When NASA Will Share The Images Of Galaxy Taken By The JWST?

The Webb telescope will unveil its first set of science images in July, focusing on galaxies and objects that “highlight all the Webb scientific themes… from the early Universe, to galaxies over time, to the life cycle of stars, and to other worlds,” according to Klaus Pontoppidan, project scientist at the Space Telescope Science Institute in Baltimore.

On December 25, 2021, NASA launched the US$10 billion Webb telescope, sending it on a 930,000-mile (1.5 million-kilometer) trip to its eventual location in the sky. The telescope is made up of 18 hexagonal mirror parts that are joined together to form a massive, 21-foot-wide (6.4-meter) mirror.

The telescope was built to study the faint light of the Universe’s first stars, which date back to 13.8 billion years ago, barely millions of years after the Big Bang.