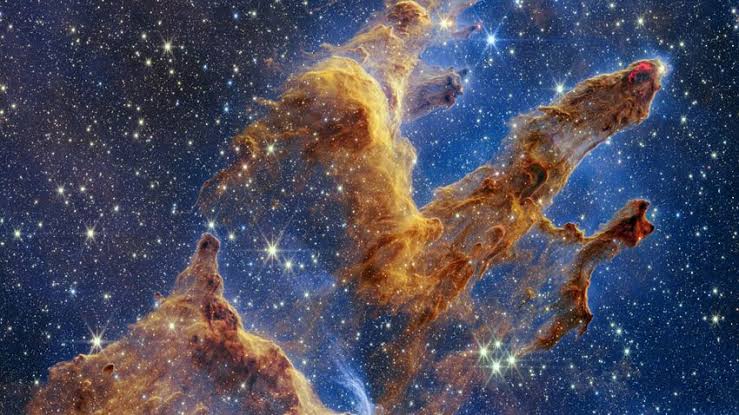 The iconic Pillars of Creation, where new stars are forming beneath dense clouds of gas and dust, are seen in luscious, highly detailed images by NASA’s James Webb Space Telescope.

The beautiful rock structures that appear in three dimensions are far more permeable. In near-infrared light, these columns of chilled interstellar gas and dust occasionally appear to be semi-transparent.

By identifying much more accurate counts of newly formed stars as well as the amounts of gas and dust in the region, Webb’s new view of the Pillars of Creation—which first gained notoriety when photographed by NASA’s Hubble Space Telescope in 1995—will aid researchers in revising their models of star formation.

What does the image display?

In this image from Webb’s Near-Infrared Camera, newly minted stars steal the show (NIRCam). These are the bright red orbs, usually with diffraction spikes, that are outside of one of the dusty pillars.

They start to collapse under their own gravity, slowly heat up, and finally produce new stars when knots with sufficient mass form within the pillars of gas and dust.

What about those wavy, lava-like markings at certain pillars’ edges?

These are star formation-related ejections from young stars in the surrounding gas and dust. Young stars occasionally release supersonic jets that smash with surrounding material clouds to form these massive pillars.

Bow shocks can occasionally come from this as well, which can create waves that resemble the motion of a boat across water. The bow shock causes a vehicle flying at supersonic speeds to experience a large increase in drag.

When designing the return capsules for space missions like the Apollo programme, which required a significant amount of drag to slow down during atmospheric reentry, this attribute was taken into consideration.

Related: Watch DART Impact Through The Eyes Of Webb And Hubble

How are hydrogen molecules produced?

The powerful hydrogen molecules produced by shocks and jets are what give off the crimson glow. This can be seen in the second and third pillars from the top, where their activity nearly pulses through the NIRCam image. These newborn stars are only a few hundred thousand years old, according to estimates.

There aren’t any galaxies in this image, despite the appearance that near-infrared light has allowed Webb to “punch through” the clouds to show vast cosmic expanses beyond the pillars.

Instead, the densest region of the disc of our Milky Way galaxy contains blocks of the interstellar medium, a mixture of transparent gas and dust.

What did the researchers come to know?

Hubble first captured this scene in 1995, and it was captured again in 2014. However, many other observatories have also focused intently on this region. Researchers learn something new about this region, which is virtually bursting with stars, with each new improved instrument.

The enormous Eagle Nebula, which is located 6,500 light-years away, is the backdrop of this closely cropped photograph.