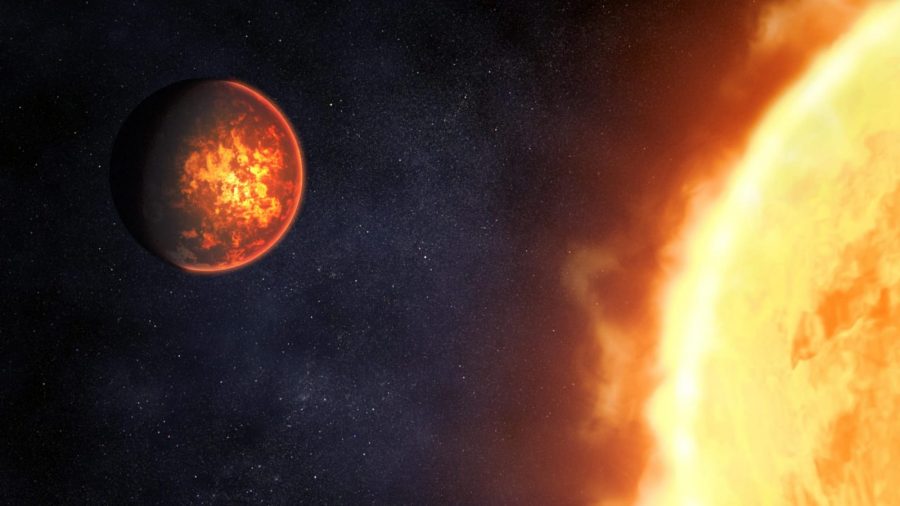 Imagine what might happen if Earth will substantially closer to the Sun. So close that a year is only a few hours long. So close that Gravity is confined over one hemisphere in perpetual scorching daylight and the other in unending darkness. So close that the oceans will begin to disappear, rocks begin to melt, and lava rains from the clouds.

While nothing like this exists in our own solar system, planets like this—rocky, Earth-like, extremely hot, and near to their stars—are not uncommon in the Milky Way galaxy.

NASA’s James Webb Space Telescope is just weeks away from full operation, with its mirror segments perfectly aligned and its scientific instruments being calibrated. Webb’s in-depth science will begin as soon as the first observations are released this summer.

The lava-covered 55 Cancri e and the airless LHS 3844 b are two hot exoplanets that are designated as ‘super-Earths’ because of their size and rocky nature.

Webb’s high-precision spectrographs will be trained on these worlds to learn more about the geologic diversity of planets around the galaxy, as well as the evolution of rocky planets like Earth.

55 Cancri e orbits its Sun-like star at a distance of less than 1.5 million miles (one twenty-fifth of the distance between Mercury and the Sun), taking less than 18 hours to complete one round.

The day side of the planet is supposed to be covered in lava oceans due to surface temperatures higher than the melting point of ordinary rock-forming materials.

How Is Cancri e So Unique?

Planets that circle this close to their star are thought to be tidally locked, meaning that one side of their orbit is always facing the star.

As a result, the hottest place on the planet should be the one that faces the star most directly, and the amount of heat emitted during the day should remain relatively constant.

However, this does not appear to be the case. The hottest section of 55 Cancri e, according to observations from NASA’s Spitzer Space Telescope, is offset from the part that faces the star most directly, whereas the total amount of heat recorded from the day side varies.

How Is The Atmosphere Of The 55 Cancri e?

The planet’s dynamic atmosphere, which transports heat around, could be one explanation for these findings. “55 Cancri e could have a thick atmosphere dominated by oxygen or nitrogen,” said Renyu Hu of NASA’s Jet Propulsion Laboratory in Southern California, who is leading a team that will use Webb’s Near-Infrared Camera (NIRCam) and Mid-Infrared Instrument (MIRI) to capture the planet’s thermal emission spectrum on the day side.

“If there’s an atmosphere, [Webb] has the sensitivity and wavelength range to detect it and figure out what it’s made of,” Hu noted.

Does It Rain Lava During Evening on 55 Cancri e?

However, there’s also the possibility that 55 Cancri e isn’t tidally locked. Instead, it might be like Mercury, which rotates three times per two orbits (a 3:2 resonance). As a result, there would be a day-night cycle on the planet.

“That could explain why the world’s hottest region has shifted,” said Alexis Brandeker of Stockholm University, who is part of another team investigating the globe. “The surface would take time to warm up, much as it does on Earth.” The hottest part of the day is in the afternoon, not in the middle of the day.”

How Can We Observe 55 Cancri e?

NIRCam will be used by Brandeker’s team to measure the heat emitted from the illuminated side of 55 Cancri e during four distinct orbits to test this idea.

They should be able to detect any change between the hemispheres if the planet has a 3:2 resonance.

During the day, the surface would heat up, melt, and even vaporize in this scenario, creating an extremely thin atmosphere that Webb would be able to detect.

The vapor would cool and condense in the evening, forming lava droplets that would rain back to the surface before solidifying.

While 55 Cancri e will reveal the fascinating geology of a world engulfed in lava, LHS 3844 b will present a once-in-a-lifetime opportunity to study the solid rock on an exoplanet’s surface.

LHS 3844 b, like 55 Cancri e, orbits its star very closely, completing one revolution in 11 hours. The planet, however, is not hot enough for the surface to be molten because its star is small and cool.

Furthermore, Spitzer observations show that the planet is unlikely to have a significant atmosphere.

While Webb will not be able to image the surface of LHS 3844 b directly, the lack of an obscuring atmosphere allows spectroscopy to be used to analyze the surface.

Laura Kreidberg of the Max Planck Institute for Astronomy remarked, “It turns out that different types of rock have varied spectra.”

“Granite is lighter in color than basalt, as you can see with your eyes.” The infrared light given out by rocks has similar variance.”

The thermal emission spectrum of the day side of LHS 3844 b will be captured using MIRI, and its composition will be determined by comparing it to spectra of known rocks such as basalt and granite.

The spectrum could reveal the presence of tiny amounts of volcanic gasses if the planet is volcanically active.

What Is The Significance Of These Discoveries?

The significance of these discoveries extends far beyond just two of the galaxy’s more than 5,000 verified exoplanets. “They’ll give us fantastic new perspectives on Earth-like planets in general,” Kreidberg said. “They’ll help us to learn what the early Earth might have been like when it was hot like these planets are now.”