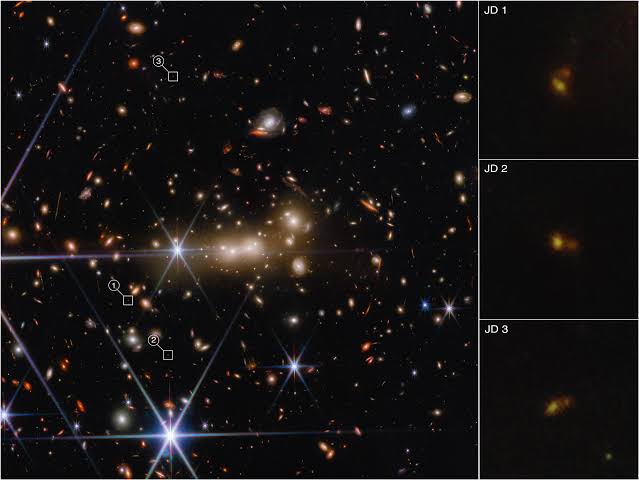 Astronomers can now see a glimpse of the early universe thanks to NASA’s James Webb Space Telescope, which was created specifically to detect the dim infrared light from extremely distant galaxies. It is not generally known or understood what galaxies were like at this formative stage of our cosmos.

However, weak background galaxies can be made more visible and appear several times in various regions of the image thanks to gravitational lensing caused by a group of galaxies in the foreground.

Three Webb-focused astronomers are with us today to discuss their most recent research. The team consists of Rebecca Larson from the University of Texas at Austin, Tiger Hsiao from Johns Hopkins University, and Dan Coe from AURA/STScI for the European Space Agency and Johns Hopkins University. These researchers have been using Webb to observe the far-off galaxy MACS0647-JD, and they’ve discovered something intriguing.

Daniel Coe: Ten years ago, I used the Hubble Space Telescope to find the galaxy MACS0647-JD. Until I came upon this galaxy, which was maybe the most distant at redshift 11, or 97 percent of the way back to the big bang, I had never worked on high redshift galaxies. Hubble could only see this tiny, faint red dot.

It was only a tiny galaxy in the first 400 million years of the cosmos, but we could tell it was incredibly small. Now that Webb is looking, we can resolve TWO objects! Whether these are two galaxies or two star clusters within a galaxy is a topic of intense discussion. These are the questions Webb is asked to help us answer because we don’t know the answers.

Tiger Yu-Yang Hsiao: You can also see how drastically different the colors of the two objects are. One is more blue, while the other is more red. The characteristics of the red gas and the blue gas differ. The little, red object is older and has more dust inside than the blue one, which actually features very nascent star formation and almost no dust. Additionally, their stellar masses are probably different as well.

The presence of two structures in such a little system is truly intriguing. In the very early cosmos, there may be a galactic merger happening right now. I’ll be over the moon if this is the farthest merge!

Daniel Coe: The large galaxy cluster MACS0647 is gravitationally lensed into three images: JD1, JD2, and JD3. They are each multiplied by factors of 8, 5, and 2, respectively.

Becky Larson: We haven’t been able to study galaxies in the early cosmos in great detail up until now. Prior to Webb, we had only a few tens of them. We can learn more about their evolution by studying them to see how they came to resemble the galaxy we currently inhabit. Moreover, how the universe changed over time.

My best feature, I believe, is that in the backdrop of so many of the new Webb images that we receive, galaxies can be seen as tiny dots. Each and every one of them. The amount of information we are now receiving that we simply couldn’t see previously is incredible. And it’s not a particularly deep field. It wasn’t a very lengthy exposure. For a very long time, we haven’t even attempted to use this telescope to focus on a single object. This is only the start!