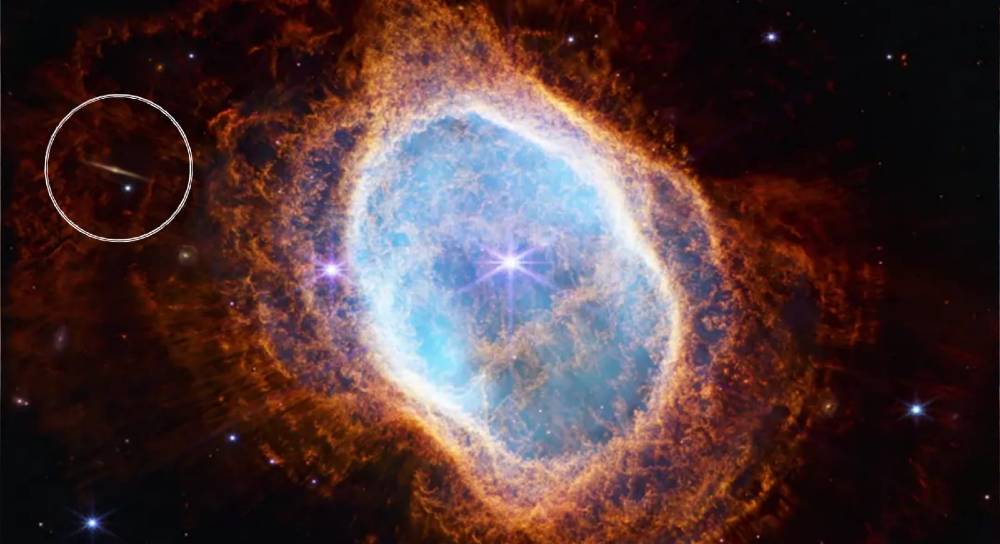 You’re not alone if you’re still excited over the first round of full-color James Webb Space Telescope photos. Four further brand-new photographs that depict our Universe in never-before-seen detail were released this week, and we haven’t been able to stop marveling at them since the first image was revealed this week.

However, there’s a crucial point that we initially overlooked. It appears as a streak of light in the upper left of the Southern Ring Nebula photos, but it’s actually a side view of a galaxy.

During the image unveiling, NASA astronomer Karl Gordon said, “I made a wager that said ‘It’s part of the nebula’,” according to some information. “I lost the wager because, after closer inspection of the NIRcam and MIRI photos, it was discovered that the galaxy was definitely edge-on.”

This viewpoint should enable astronomers to investigate how stars are spread throughout the galaxy in addition to looking cool.

Related: Explained, What We Learned From The Webb Telescope’s First Images?

What Does The Image Reveal?

You’re viewing stunning waves of death from the Southern Ring Nebula, a huge dust and gas cloud situated around 2,000 light-years distant, in case you missed it yesterday.

Its center is surrounded by two stars. A white dwarf, or the collapsed core of a dead star, is the fainter of the two. During its lifetime, it may have had up to eight times the mass of the Sun.

What Happened To That Star?

When it reached the end of its lifespan, it blew off its outer layers and its core compacted into an extremely dense entity, packing up to 1.4 times the mass of the Sun into a body the size of Earth. The JWST has for the first time been able to show that this star is shrouded in dust.

This brilliant star is still in the early stages of its existence and will eventually erupt into its own nebula.

What Are The Other Things That JWST Spotted?

The JWST’s Near-Infrared Camera, located on the left, shows bubbling orange hydrogen from recently produced expansions as well as a blue cloud of hot ionized gas from the dead star’s residual heated core.