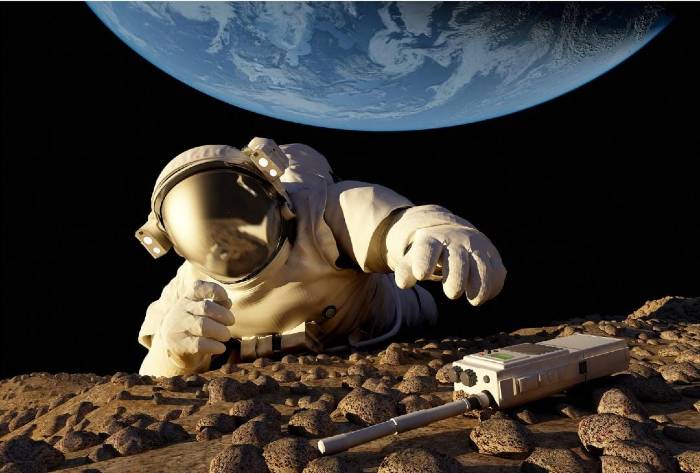 Being an astronaut traveling through the vast reaches of space and then suddenly you’re unintentionally launched from your spacecraft’s airlock.

What would happen to your body without a spacesuit if it was exposed to the Vaccum of space?

As most Hollywood movies have presented this situation, they depict individuals dying instantaneously from explosions or freezing to death without the protection of helmets or spacesuits. The consequences would be similar in reality but less pronounced.

Without a suit, an astronaut floating in space wouldn’t survive, but their death would take place over a period of minutes rather than seconds, and it would be a brutal one with boiling internal organs and a virtually frozen nose and mouth.

What Kind Of A Place Is Space?

There is no atmosphere or pressure from air molecules in space because it is a vacuum empty of air, unlike Earth. Temperatures at which liquids boil and become gaseous are governed by atmospheric pressure.

It is more difficult for gas bubbles to develop, rise to the surface, and escape from a liquid when the pressure of the air surrounding it is high, as it is at sea level on Earth. The boiling point of liquids does, however, substantially reduced because there is almost no air pressure in space.

According to Dr. Kris Lehnhardt, an element scientist for NASA’s Human Research Program, “this is a big problem because water makes up 60% of the human body, as you may guess.” Without pressure, the liquid water in our bodies would boil and instantly transform into a gas. He explained, “basically, all of your body tissues that contain water will start to inflate.”

Can Someone Resist Vacuum?

In fact, some people have been subjected to almost-vacuum conditions and survived. Jim LeBlanc, an aerospace engineer working for NASA at the time, was helping to evaluate the effectiveness of spacesuit prototypes in a sizable vacuum chamber.

The line supplying his suit with pressurized air was cut off at some point during the test. He recalled that in the 2008 “Moon Machines” documentary series episode “The Space Suit,” as he fell backwards, “I could feel the saliva on my tongue starting to bubble just before I went unconscious, and that’s kind of the last thing I remember.”

Ebullisms, or the development of gas bubbles in biological fluids, can also happen to deep-water scuba divers who surface too soon because they transition from a high-pressure underwater environment to a low-pressure environment at the water’s surface.

This is because the circulatory system has its own internal pressure, blood traveling through the veins in astronauts without suits boils more slowly than water in the tissues, yet enormous ebullism in the body’s tissues would occur soon.

How Long Humans Could Survive In Space Without A Spacesuit?

Here Are The Step By Step Process-

Step1- The absence of air in space will cause your body to lose air. Your lungs will therefore burst if there is still air inside of them.

Step2- Your body’s remaining oxygen will also increase. Even though you will double in size, you won’t blow up. Your skin has enough elasticity to keep you together.

Step3- Any liquid that is exposed to your body will start to evaporate. Your tongue and ocular surfaces will thus boil. Your blood will stop carrying oxygen to your brain if your lungs aren’t filled with air.

This will take between 12 and 26 hours, depending on where you are in space; but, if you are close to a star, you will instead be burned to a crisp. Your body will stay that way in either case for a very long period.

You will begin to rot from the inside out due to gut bacteria, but this process won’t last long. For millions of years, you might be stationary in space. Who knows, maybe a technologically advanced alien species will find you.

What Happens To Humans And Animals When They Are Exposed To Vacuum?

When animals and people were exposed to vacuums in the past, a 2013 review published in the journal Aerospace Medicine and Human Performance revealed that they lost consciousness within 10 seconds.

Afterward, several of them experienced involuntary bowel and bladder movements, and the swelling in their muscles operated as a vapor lock, restricting blood flow to their hearts and brains.

Lehnhardt declared that “no person can survive this – death is likely to occur in under two minutes.”

For How Much Time Can Humans Survive In The Vacuum Of Space?

NASA’s bioastronautics data book states that the vacuum of space will also drown you in a matter of minutes by sucking all the oxygen out of your lungs. The vacuum would continue to draw gas and water vapor from your body through your airways after an initial burst of air surged out.

Continuous water boiling would also have a cooling effect because as the water evaporates, heat energy from your body is absorbed, almost freezing the areas around your nose and mouth. The rest of your body would likewise cool, but it would do so more gradually because there wouldn’t be as much evaporation.

How Can Cold Kill A Human In Space?

According to physicist Paul Sutter, temperature is a measurement of how much energy atoms and molecules need to move. Since space is essentially empty, there is very little movement, which is what makes it “cold.”

The absence of stuff in space also means that heat cannot be transferred there (opens in new tab). However, a person could become ice-cold due to both the slow loss of heat from their body’s radiation and the evaporation of their body’s water.

Why Are Spacesuits Needed by Astronauts?

Astronauts benefit much from spacesuits. Astronauts are shielded from extreme heat and cold by their suits. While operating in space, astronauts may breathe oxygen thanks to their spacesuits. To drink water, use the suits.

Additionally, they protect astronauts from space dust injuries. The hazard of space dust may not seem particularly great. The dust, however, can be harmful when it goes more quickly than a bullet. Even the special gold-lined visors on the costumes are there to shield the eyes from the direct sunshine.

What Components Make Up a Spacesuit?

There are numerous components in a spacesuit. The astronaut’s chest is covered by one piece. Another piece attaches to the gloves and covers the arms. The head is shielded by the helmet. The astronaut’s legs and feet are covered in the final section.

Several layers of material are used in some suit components. Every layer performs a particular function. Others shield astronauts from space dust while others preserve oxygen in the suit.

Astronauts also wear another item of clothing below their suit. Except for their head, hands, and feet, it covers their entire body. It is weaved with tubes. In order to keep the astronaut cool, water runs through the tubes.

A SAFER tool is attached to the back of the suit. The SAFER contains a number of tiny thruster jets. An astronaut may utilize SAFER to fly back to the space station if they floated away from it.

The American astronauts’ spacesuits of older generations were heavier and less flexible than the Boeing Blue suits, which are around 40% lighter.

For the purpose of keeping astronauts cool, they have many interior layers. Additionally, the suit incorporates touchscreen-sensitive gloves that let astronauts use tablets inside the spacecraft.

The soft, hood-like helmet has a large polycarbonate visor to improve peripheral vision for Starliner passengers during the trip into and out of space. The transition from sitting to standing will be more comfortable thanks to zips in the torso area.

A detailed look at two future suits for the agency’s Artemis programme was given by NASA in October 2019. With the help of the Orion spacecraft, NASA hopes to send astronauts back to the Moon by 2024.