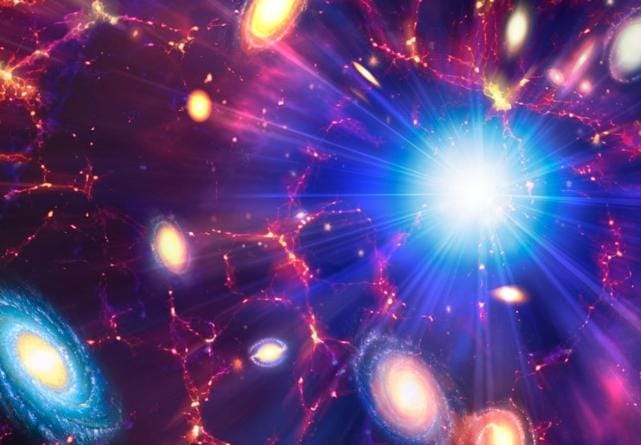 Read: What will happen when the Milky Way and Andromeda galaxy collide?

We live in an ever-expanding universe that is getting bigger as each day goes by. Every day the galaxies are getting farther apart from each other on an average, leading to instances such as Andromeda Galaxy heading on a collision course for the Milky Way.

A key feature of this expansion is how consistent it is throughout. Imagine a bunch of folks standing around the edges of a stretchy piece of fabric and tugging at it. Let us assume they can freely walk backward and pull at the same rate. Imagine yourself standing in the middle you can observe that your “universe” is expanding, any objects placed on that fabric would be moving away from you.

The objects on the fabric close to you would appear to move away from you at the same speed, but the farther objects would appear to move faster than the others. The apparent stretch changes with distance, although the folks doing the pulling are moving at a constant speed. If you do not believe this is true, you can try it for yourself at home!

Now let us apply this example to the universe. Imagine again a bunch of folks standing at the edge of the cosmos, gently tugging the fabric of space-time, stretching it. Edwin Hubble was the first one to measure the expansion rate. Unfortunately, the number he got was way wrong. The modern value is 68 kilometers per second per megaparsec, approximately. Megaparsec means distance: One megaparsec is 1 million parsecs, which means 3.26 million light-years.

But this is confusing for two reasons. One, it’s not moving at that speed through space, but rather this is the effect of the space between objects expanding. Two, the speed of light is 299,792 km/s, so isn’t that hypothetical object we assumed 5000 megaparsecs away actually moving from us at speeds exceeding the speed of light?

Let us then take the example of the “Raisin bread” model of the expanding universe. Imagine you have a ball of dough with raisins all over it. Now assume that the dough leavens, and expands in all directions. After that, if you put your finger down on one raisin, what do you see the other raisins doing in the meantime?

Now imagine the raisins are like galaxies or clusters of galaxies, and the dough is like the expanding universe. But in this case, the dough here represents the fabric of space that cannot be seen or be detected and doesn’t get less dense as the universe expands and simply provides a platform for the raisins or galaxies to inhabit.

The rate of expansion is dependent on the total amount of material in a given volume of space, so as the universe expands the material dilutes and the expansion rate drops with it.

The effect of cosmic expansion, at distances of more than 100 megaparsecs is always the dominant effect. On the largest cosmic scales, the expansion of the universe is all that matters. What is important is to recognize that expansion doesn’t have an intrinsic speed to it at all, space expands at a frequency; a speed-per-unit distance.

Whatever the expansion rate is today, combined with whatever forms of matter and energy exist within your universe, will determine how redshift and distance are related to extragalactic objects in our universe. The size of our visible universe, along with the amount we can reach.

The farthest observed galaxy GN-z11 emitted it’s now- arriving light 13.4 billion years ago and is located some 32 billion light-years away.

From all these explanations and hypothetical theories, we come to a point that with each moment that passes, every unbound object moves farther away from us and previously reachable objects become forever unreachable. So, nothing moves faster than light in an ever-expanding universe.

1 thought on “How can the Universe Expand Faster than Light?”