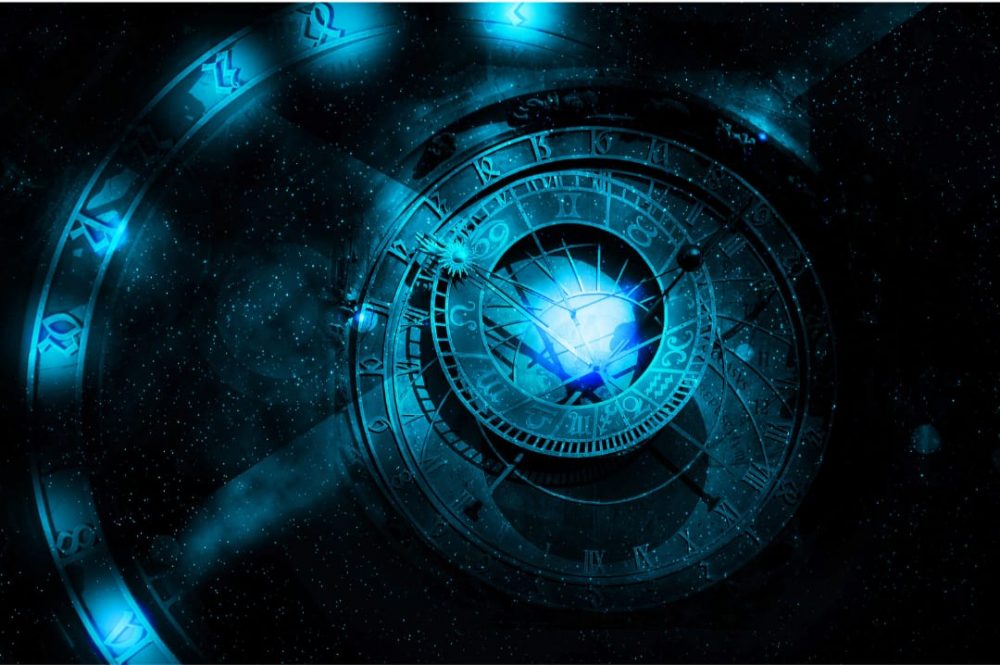 What is time? Nobody is sure how to respond to that question. What kind of time do we mean, we must first clarify before we can proceed? What do clocks tell the time? Is it possible for time to end? If this happens, what will be the ultimate fate of our universe? or once the universe ends, is it the end of time?

These two questions are intertwined with each other and open lots of topics for discussion. Let’s try to patch up this in further sections of this article.

What Is This Time?

The time you can see on your watch is a machine-created representation of time, not actual time. Time is a measure of change, and things do change. If we want to have some degree of control over this change, we should learn to quantify it.

Clock time is a human construct that we created to make sense of what we feel deeply about the nature of time. But what is so baffling is the sensation of time passing. We sense it, we see it, and we know it’s there.

We can see it in the mirror as we get older. But we are unable to grasp it.
Our existence is dominated by time, but time itself is beyond our comprehension.

Time is not the same as space. We are free to travel left, right, backward, and forward in space. However, time can be compared to a prison. We are powerless to stop it, and we are unable to avoid it. The action continues, and that is it.

A Change In The Passing Of Time

The idea of relativity has altered the way we think about how steadily time passes. However, time continues to pass, even when witnesses moving in different directions experience it differently.

A moving clock ticks more slowly than one that is at rest, according to Einstein. But time marches on for both of them while they both tick. The fact that light travels at the fastest speed in the universe is one of the tenets of relativity.

Why Is Light Unaware Of Time’s Existence?

Anything with mass is unable to move at the speed of light. The speed of light can only be attained by light itself. (Gregons, which are fictitious particles that are thought to have no mass and possess gravitational attraction, would also fit this description.)

So, perhaps time does not exist for light. However, since light is unaware that it exists, it is unlikely that it is concerned about the passage of time.

The Past Of Everything

However, we do care. And current science has incredibly demonstrated to us that everything that exists has a past. There is always an embedded temporal narrative that tells the tale of a given entity, whether it be a living organism, a rock, or the universe itself. We must look to the Universe itself for the greatest story of all time—the one that contains all other stories.

We do know that the Big Bang, 13.8 billion years ago, marked the beginning of time. The start of time was that occasion. Time is a measure of change in our minds.

In one, the universe will continue to grow indefinitely. Because stars have limited lifespans, they will eventually go extinct at some point in the very distant future. The universe will be littered with dead stars, ranging in size from tiny black holes to slowly smoldering white dwarfs.

However, depending on the types of matter the Universe contains, drama may be introduced here. Dark matter, dark energy, and the matter we are composed of—protons (really quarks) and electrons—are the three fundamental components if the current recipe is to remain viable.

Drama may, however, be introduced here based on the types of stuff the Universe contains. If the existing recipe is to continue to work, dark matter, dark energy, and the stuff that makes up protons (actually quarks), and electrons, are the three essential ingredients.

Will This Universe See A Cold Death, Or Destruction By Fire?

Dark energy is in charge of the Universe’s future, assuming that regular matter and dark matter are both stable over a long period. The expansion of the universe will continue to speed up if dark energy, an ether-like material of unknown composition, is a constant, that is, if its density does not vary and it keeps a set volume despite cosmic expansion.

In worst-case scenarios, it might exert so strong negative pressure that it rips everything apart, reducing matter to its constituent parts. The cosmic epitaph would read “from particles to particles” rather than “from dust to dust.”

But it’s also plausible that dark energy isn’t like that and with time, its negative pressure will diminish and stop accelerating the expansion of the universe. Acceleration will slow down, but the universe will still have faded stars and their corpses resting apart from one another.

This will be the height of cosmic isolation. The terrible issue is that matter cannot rearrange into anything fascinating in a universe where entropy has nowhere to grow. This is the grim scenario of cosmic death. If nothing is done to alter the situation, time itself will cease to exist.

Another risk is a slowdown in the expansion. If there is enough matter in the universe, it might reverse course and cause the universe to contract rather than expand. After being scattered over billions of years, stuff will eventually condense back into a small space, heat up, reach crushing densities, and then, well, it depends.

It might experience a Big Crunch, which is the opposite of the Big Bang, or it could reach a maximum point of contraction before bouncing outward into a fresh period of expansion.

What Happens In This Concept?

The universe in this concept bounces back and forth between periods of expansion and contraction, never quite reaching the primordial singularity or infinite density. Despite the necessity for new clocks with each cycle, time continues to pass.

A new time and a new cycle of existence begin at every end of time. Even though each cycle involves fire-related destruction, this is a little more comfortable than the idea of cold death.

Our present cosmological models teach us how lucky we are to be here at the exact time when it is feasible to be here. There is obviously no element of chance in this.

We exist today because this is the time when matter can group together to form thinking blobs like ourselves. In earlier times, there wouldn’t have been any stars able to support life for long enough for it to speculate about its future. So if time does stop, it would be because living things like ourselves will likewise perish.

The idea of existence itself has no significance in a universe devoid of intelligent life that is aware of the passage of time and of the past and future. When we think about how little we are amid the immensity of space, that ought to make us stop and think.