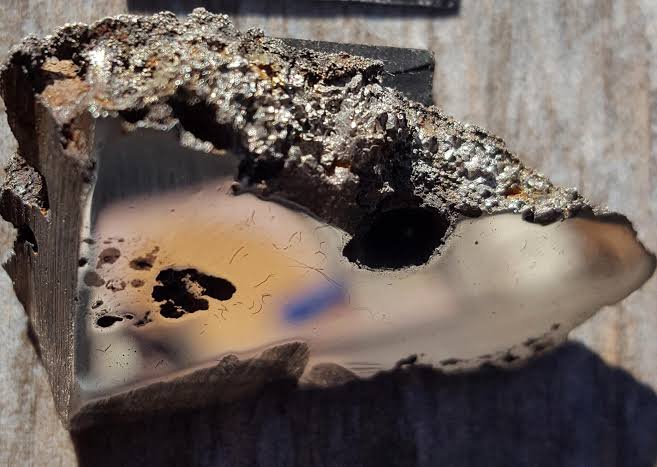 A massive space rock fragment found in Somalia was analyzed, and it contained elements never before observed in nature.

The International Mineralogical Association has already analyzed and named two new minerals that have been identified where as a possible third one is currently under consideration.

The Discover Of Two Minerals

The genesis of asteroids and meteorites may be better understood as a result of this discovery, according to scientists.

The minerals have been identified as elatite and elkinstantonite, and planetary geologist Chris Herd of the University of Alberta in Canada made the discovery announcement on November 21 at the Space Exploration Symposium.

Every time a new mineral is discovered, Herd explains, “it signifies that the real geological circumstances and the chemistry of the rock were different than what has been found previously.” This particular meteorite has two officially described new minerals, which is what makes it exciting.

Characteristics Of The Rock

The rock in question, a 15.2-ton boulder that happens to be the ninth-largest space rock ever discovered on Earth’s surface, was only recently identified as a meteorite. It was found partially embedded in sand in a limestone-rich valley in Somalia close to the town of El Ali.

It’s unclear when the rock fell from the sky, but the people gave it the name “Nightfall,” remembered it in songs, dances, and folklore for at least five to seven generations, and used it as an anvil for sharpening knives.

The odd, pitted rock captured the attention of opal prospectors in the area in 2019, who struck off several samples and sent them to Herd and the University of Alberta’s Meteorite Collection for examination and classification.

Together with scientists from the California Institute of Technology and the University of California, Los Angeles, Herd quickly identified Nightfall as an iron meteorite from the IAB complex and gave it the formal name El Ali in honor of the adjacent town.

Around 350 meteorites fall within the iron IAB complex classification, which is distinguished by, among other things, a composition that is primarily iron-nickel with inclusions of silicates that resemble little raisins in fruitcake. They are believed to have developed from an iron asteroid’s impact-induced melting.

Herd and his team had to analyze the chemical composition of the meteorite in order to categorize it, and this is where things changed. Herd sought the assistance of University of Alberta mineralogist Andrew Locock, who has been engaged in identifying numerous new minerals, because some of the inclusions appeared to have an odd structure and composition.

“You’ve got at least two new minerals in there, ” he said on the very first day he conducted some analyses, according to Herd. “That was outstanding. To declare the existence of a new mineral typically requires much more work.”

What Are The Minerals Composed In The Meteorite?

The two minerals were composed of iron, phosphorus, and oxygen. El Ali’s mineral,, has the chemical formula Fe2+8Fe3+(PO4)O8. Elkinstantonite, which bears the chemical formula Fe4(PO4)2O, was named for planetary scientist Lindy Elkins-Tanton of Arizona State University. Elkins-Tanton has contributed significantly to our understanding of the formation of iron meteorites and planetary cores.

These two minerals were similar to those that had been synthesized in a laboratory setting in the 1980s, which made them much easier to identify as new minerals than they might have been in the past. The two minerals have been officially classified and given names now that they have been discovered in nature.

The discovery and classification of a third potential new mineral is still ongoing. Additionally, researchers are putting the finishing touches on a study that will outline the processes that could produce these minerals and what that means for how the El Ali meteorite was created.

How to elucidate the geologic processes and the geologic history of the asteroid this rock was once a part of is Herd’s area of expertise. “I never imagined that merely by working on a meteorite, I would be involved in describing brand-new minerals.”

As for Nightfall, it was hauled from the location where it had lain for ages and brought to Mogadishu, the capital of Somalia, where it was weighed before being seized by the Somalian authorities. It’s unclear what happened to it after that, but according to Herd, sources indicated that it was taken to China, where meteorite traders might have purchased it and sliced it up for sale.

The scientists are attempting to locate it in the hopes that they may collaborate with meteorite traders and collectors to acquire more fragments of the rock and carry out additional research using them.

Herd concluded his lecture by saying, “There is more material out there; it just has to get in the hands of scientists so that we might possibly find some other new minerals.”