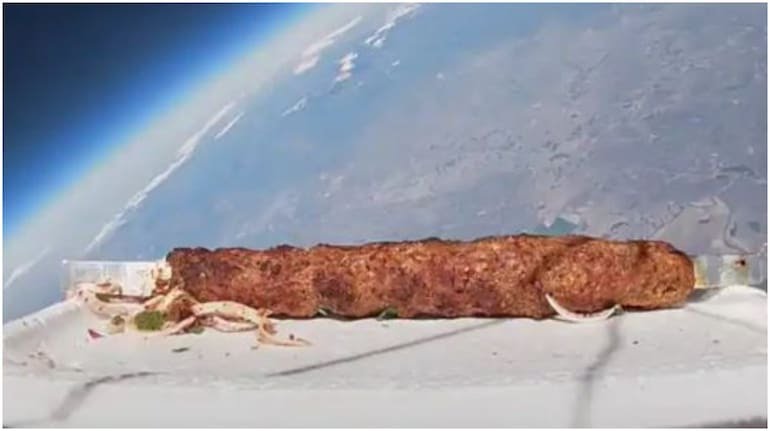 All co-owners of the food strive to spread the food’s popularity around the world. A Turkish space kebab shop owner went a step further by launching his famous pipe kebab into space.

On Tuesday, April 12, 2022, chef Yashar Aydın and space engineering student Idris Albayrak attached a tube kebab to a helium balloon and launched it into space. The launch took place in the Adana province of Turkey, where the famous pipe kebabs are made.

What Was Special About Tuesday?

They chose Tuesday because April 12, 1961, is the International Day of Human Space Flights, which commemorates the day when Soviet cosmonaut Yuri Gagarin orbited the Earth for the first time.

How Was Laban Sent To Space?

According to the Daily Sabah, a special box was created for kebabs’ space travel. This box holds the plate in place and protects it from extreme temperatures. The box was also equipped with a camera and tracking device. The box was tied to a powerful weatherproof helium balloon before being launched into the sky.

This is a picture of a kebab in space launched from Adana, #Turkey, living its best life. Don’t accept limits.

What Happened To The Helium Balloon?

DHA, a Turkish news agency, reported the helium balloon exploded after it reached a height of 38 kilometres and then the kebab fell 121 kilometres away from its launch site into the sea.

Interestingly, the Space Kebab box was retrieved by Yaşar Aydın and his team. After this odd exercise, the chef jokingly told the Daily Sabah, “I think aliens sent it back because it had too much pepper. I will send a dish with less pepper next time”.

“I am happy to promote our city and our cuisine. I love being first in something.”