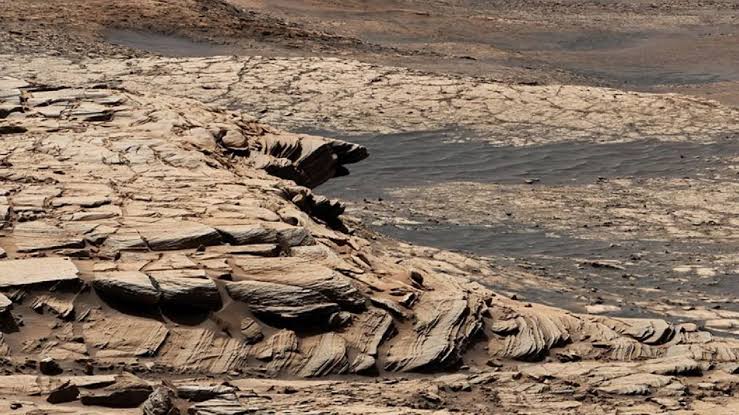 An ancient northern ocean on Mars may have existed, according to a new set of topographical maps. The maps present the most compelling evidence to date that the planet’s current harsh, frozen surface is not what it formerly looked like and that sea levels rose in accordance with an extended period of warm, humid weather.

According to Benjamin Cardenas, assistant professor of geosciences at Penn State and the study’s primary author, “What Immediately Comes to Mind as One the Most Significant Points Here Is That the Existence of An Ocean Of This Size Means A Higher Potential For Life.”

“It also reveals information on the development of the ancient climate. These results indicate that there must have been a time when the temperature was high enough and the atmosphere was dense enough to support this much liquid water at once.”

Existence Of An Ocean On Mars

The existence of an ocean on Mars in its low-elevation northern hemisphere has long been a topic of discussion among scientists, according to Cardenas. The research team was able to present unmistakable proof of a about 3.5 billion year old shoreline with significant sedimentary buildup, at least 900 meters thick, covering hundreds of thousands of square kilometers using topographical data.

The significant, original thing we did in this work, according to Cardenas, was to consider Mars in terms of its stratigraphy and sedimentary record. “On Earth, sediment that is accumulated through time allows us to trace the history of streams. The idea that sediment is transported by water and that you may assess changes on Earth by observing how sediment accumulates is known as stratigraphy. We’ve done that here, but here is Mars.”

What Was In The Observation?

The group mapped data from the National Aeronautics and Space Administration (NASA) and the Mars Orbiter Laser Altimeter using software created by the United States Geological Survey. They found approximately 6,500 kilometers of fluvial ridges and organized them into 20 systems to demonstrate that the ridges are probably the remains of an old Martian coastline that had been eroded into river deltas or undersea channel belts.

The team was able to comprehend the evolution of the area’s paleogeography by using elements of rock formations, such as ridge-system thicknesses, altitudes, positions, and potential sedimentary flow orientations. Cardenas noted that the region that was once an ocean is now known as Aeolis Dorsa and has the world’s densest concentration of fluvial ridges.

In Aeolis Dorsa, he added, “the rocks capture some amazing information about what the ocean was like. “It had movement. Significant sea level rise occurred. Rapid rock deposition was occurring along its basins. There were many changes taking place in this area.”

Cardenas emphasized that the stratigraphic records of Earth’s changing temperature and life can be found in the old sedimentary basins. An ocean the size of the one that last covered Aeolis Dorsa would be the most sensible place to start if researchers wanted to discover evidence of life on Mars.

Looking For An Alien Life

Searching for indications of life is one of the main objectives of the Mars Curiosity rover missions, according to Cardenas. “It has continuously searched for water and signs of livable life.

The largest one so far is this. It is a huge body of water that receives sediments from the highlands, which are likely to transport nutrients.

There would have been gentle water inflows and outflows here if tides existed today on ancient Mars. This kind of environment is ideal for the evolution of ancient Martian life.”

Cardenas and his associates have identified what they believe to be additional prehistoric streams on Mars. The Curiosity rover presumably encountered sedimentary strata from old river bars at a number of outcrops, according to a study that will appear in the Journal of Sedimentary Research.

A model of basin erosion similar to that on Mars is examined in a different research published in Nature Geoscience that uses an acoustic imaging technology to view the stratigraphy beneath the seafloor of the Gulf of Mexico. The scientists came to the conclusion that the fluvial ridges, which are widespread on Mars, are probably old river deposits that were eroded from huge basins like Aeolis Dorsa.

The strata we’re interpreting here resembles stratigraphy on Earth quite a bit, according to Cardenas. “Yes, it seems grandiose to suggest that we have found evidence of significant canals on Mars, but in actuality, this stratigraphy is quite commonplace. As soon as you recognise it for what it is, it is textbook geology. The fact that it is on Mars, of course, is interesting.”