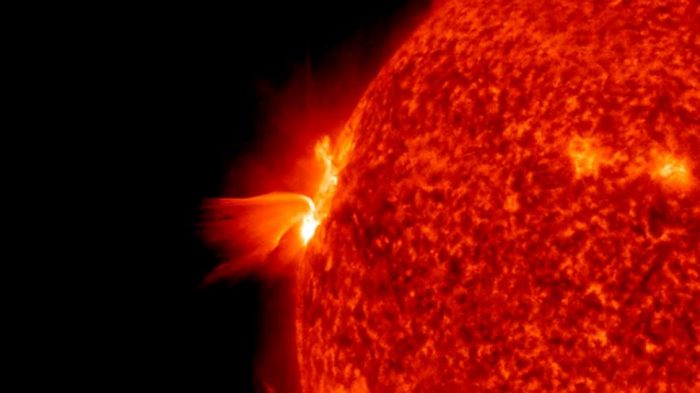 The sun has always been either violent or calm, recently there has been an increase in the sun’s activity. This may be because it has entered into a new solar cycle. The sun triggered huge solar flares over the Easter weekend, blocking the radio and setting the stage for more solar storms.

What Happened On Easter?

The Easter solar flare peaked late on Saturday (April 16) at 11:34 PM. According to the US Space Weather Prediction Center (SWPC), overseen by the National Oceanic and Atmospheric Administration, EDT (03:34 GMT April 17), a few minutes later as a coronal mass ejection. A known large-scale solar explosion has occurred. According to SWPC officials, the flare was registered as an X1.1 solar storm (class X storms are the most powerful on the Sun) and lasted about 34 minutes.

Origin Of The Solar Flares

According to SWPC, the flare originated in the 2994 and 2993 regions of active sunspot clusters that have seen “significant flares” since they appeared on the eastern edge of the Sun.

Impact Of The Solar Flare On Earth

The Easter solar flare caused a brief radio outage and was classified as a Type II solar explosion according to the SWPC.

Spaceweather.com astronomer Tony Phillips wrote in an update that “these explosions are created by shock waves from the leading edge of the CME.” Because the explosion occurred at the easternmost edge of the Sun, the resulting coronal mass ejection is likely not directed towards Earth, Phillips writes.

What Are Class X Solar Flares?

Class X solar flares are the strongest storms on the Sun. The weakest solar flare is class A. Class B and Class C storms are also relatively mild. More powerful Class M and higher storms can overload Earth’s northern lights display, and the most severe Class X storms can pose a hazard to orbiting satellites and astronauts when directed directly at Earth.

The Sun is currently in its active phase of its 11-year solar cycle (the current cycle is known as the 25th solar cycle and begins in 2019). NASA, SWPC, and other solar energy experts use several spacecraft, such as the NASA Solar Dynamics Orbiter, the NASA European Solar and Heliospheric Observatory (SOHO), and others to track the sun’s space weather.