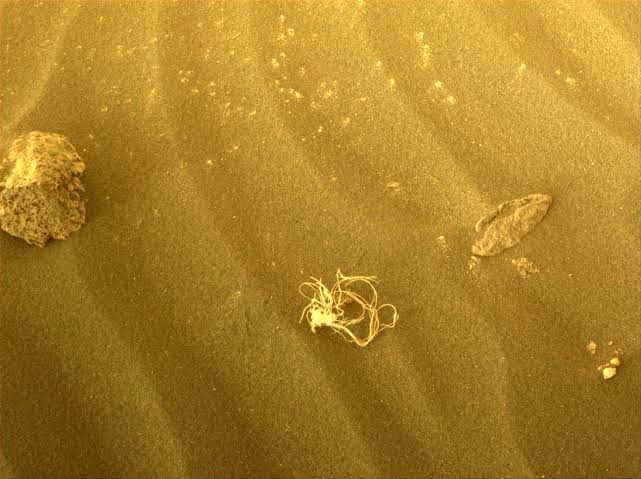 Here is the strongest proof I’ve ever seen that there is water on Mars: A tangled knot of rope that resembles tangled fishing line left behind by an irate angler was discovered on Mars by NASA’s Perseverance rover. There must be water where there is fishing, right?

Actually, it’s likely that this tiny piece of debris came from Perseverance’s parachute, descent stage, or even backshell, which all worked together to safely send the rover to Mars’ surface in February 2021.

The front right hazard avoidance camera on Perseverance abroad is used to capture a close-up shot of the tangled string in our lead image. The image below illustrates how thin the thread is by contrasting it with the rover’s wheel and the end of the robotic arm of the rover.

The Reason Behind This Object.

The “turret” of the arm is in contact with a rock that the rover’s drill has probably just extracted a sample from. The turret is like a hand that holds scientific cameras, mineral and chemical analyzers for examining Mars’ historical habitability and for selecting the most valuable sample to store for a potential return of samples to Earth in the future.

The string most likely came into contact with the rover due to the Martian wind. And just a few days later, the string is gone from the scene, indicating that it has moved on like a tumbleweed.

Other Items Discovered By The Perseverance Rover.

In addition to its own parachute, Perseverance has discovered several other items that were left over from the landing. The Ingenuity helicopter also flew by and took pictures of the damaged backshell.

You don’t have to be concerned about all the trash the rover left behind. Stuart Atkinson, an expert in image editing, advises not to be. Martians will joyfully gather up all this material in around a hundred years and either display it in museums or turn it into “historical jewelry,” just like humans do with fossils, amber, and meteorites.