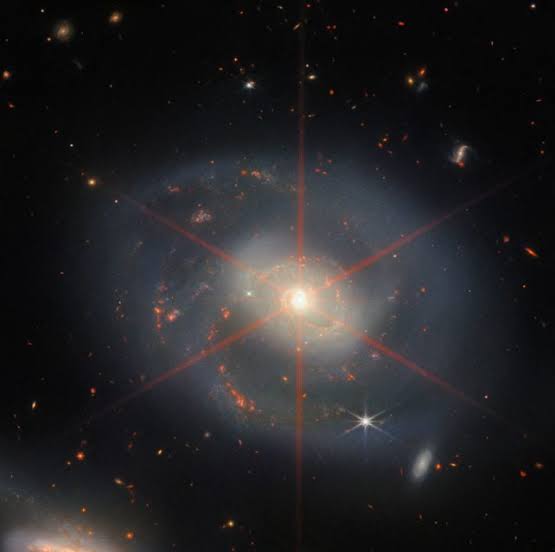 A stunning, shimmering image of a spiral galaxy 230 million light-years away, provided by the James Webb Space Telescope, is suitable for a Christmas tree.

Even though the galaxy’s name is fairly unattractive—NGC 7469—it has been an interesting topic to examine.

JWST has observed NGC 7469 as part of a study to better comprehend star formation, the development of supermassive black holes, and the way galaxies gravitationally interact and merge across huge distances in space and time. Also quite unique is NGC 7469.

A Mesmerizing View Of The Galaxy

Due to an oddity in orientation, we can see the Galaxy’s graceful, lovely spiral arms in all of their fullness. The galactic plane is almost directly in front of us, providing us with an amazing view of the galaxy’s structure.

Infrared radiation is particularly strong at the galaxy’s centre, which is also quite luminous.
This is due to the active supermassive black hole, which is responsible for the Galaxy as a whole.

How Close Is The “Starburst Ring”?

Another bright ring with ferocious starburst star formation activity can be found 1,500 light-years away from the galactic center of NGC 7469. The galaxy is plainly visible to us, so scientists may study it to learn more about the relationship between the Starburst Ring and an active galactic centre.

Starburst Rings shine brightly in the infrared, the wavelength range in which JWST views the Universe in such amazing detail. This is similar to the galactic nucleus. It is anticipated that its observations of galaxies like NGC 7469 will provide new information about these processes and their connections.

New star formation clusters and concrete evidence that dust is being destroyed extremely close to the Galactic centre have already been discovered by scientists, demonstrating how the activity is altering the galaxy.

Additionally, they discovered that The Galactic Core is ejecting highly diffuse, highly ionized plasma at a speed of roughly 6.4 million kilometers (4 million miles) per hour. The starburst ring is not being affected by the shocks from this wind, according to a recent research that is presently in publication.

Related: What Is A Galaxy? Definition And Different Types Of Galaxies?

Just off the bottom left of the JWST image lies another galaxy. That object is IC 5283, which is engaged in a gravitational duet with NGC 7469. Arp 298 refers to the pair of galaxies as a whole.

It appears that the larger galaxy is draining nourishing star-forming gas from its smaller companion because enlarged patches of bright red can be seen on the edge of NGC 7469 nearest to IC 5283.

It is believed that the interaction between the two galaxies is what caused the starburst and perhaps even galactic nucleus activity in NGC 7469.

The JWST’s diffraction spikes, an artifact caused by the telescope’s physical design, are the huge six-pointed shape that takes up most of the image. Thus, it isn’t genuinely real. It does, however, appear attractive.