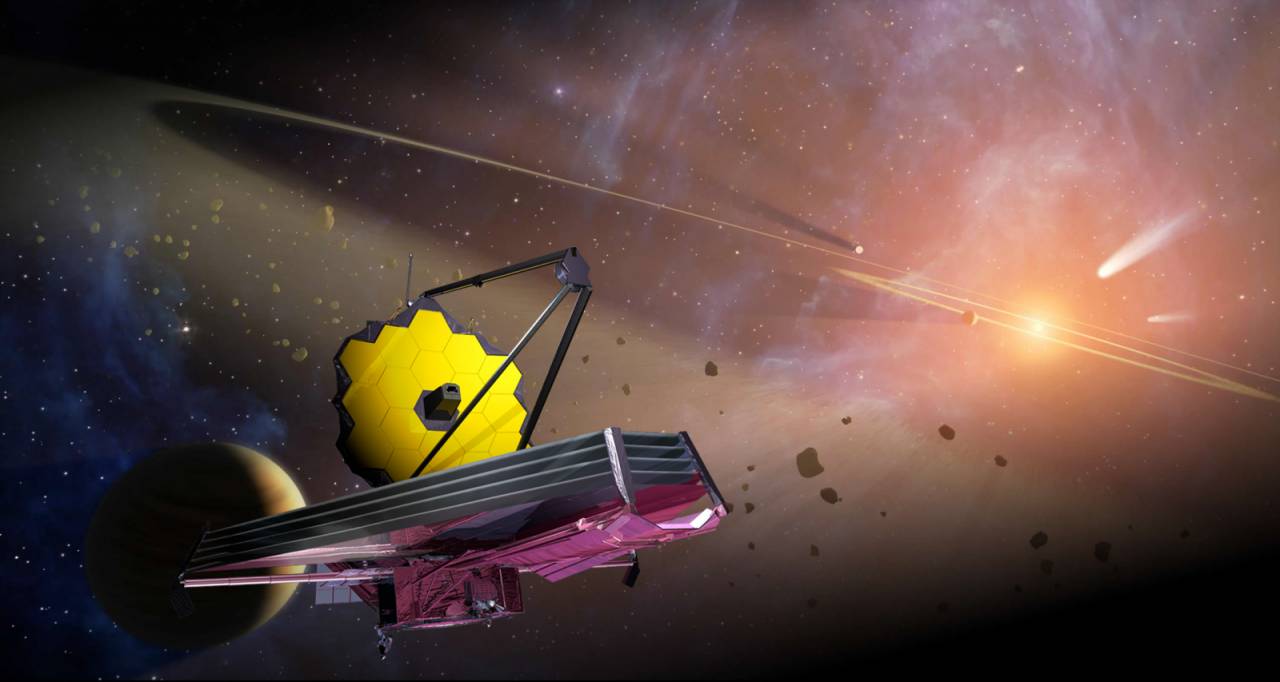 Before James Webb, previously also we have launched some infrared telescopes into space, like Spitzer and ESA’s Herschel Space Observatory, but none of them have large mirrors or instruments as advanced as Webb, to allow them to capture and analyse high-resolution data which is required to distinctly measure and study which elements are present in an exoplanet’s atmosphere.

This makes a lot of sense that these telescopes paved the way for Webb, allowing researchers to design more advanced instruments that will deliver far more precise and accurate data. When it comes to exoplanets, there’s still a great deal we don’t know yet and so there is much more to learn with Webb.

So far, riding on the success of James Webb, scientists are hoping to find some unknown building blocks for major substances such as atmosphere, land, water, oxygen, carbon dioxide and other complex organic molecules.

Therefore, Webb will complement the ESA Ariel Mission, which is a space telescope planned to be released in 2029, which will learn how exoplanets are formed and how they have developed?

How Will James Webb Observe The Exoplanets?

Jupiter is one of the initial Webb goals of proving the observatory of the image of the planet and its faint rings. Webb will also investigate the potential hidden mysteries under the ice shell of Ganymede’s moon, and also study “stealth volcanoes” that are not detected on this fiery moon.

Webb also shows different depths in observing atmospheric details as well as cloud structures and main storm systems and their evolution. Titan is the only other world in the solar system to have actual liquid sea, lakes and also rain ( methane rain), not similar to the Earth.

Webb will also map organic molecules on the disks of the solar system’s ice giants, Uranus and Neptune. They are the least studied objects in planetary category in our solar system.

Webb is designed in such a way that it has a unique ability to map atmospheric temperature, unfold their chemical structure and identify fundamental differences between the gas giants, Jupiter and Saturn.

How will Webb Study The Stars?

Webb will determine the dust and gas clouds of star formation or gas giant planets or brown dwarfs. Looking at the infrared part of the Spectrum, Webb can watch through a dust envelope around the recently born stars, and its excellent sensitivity can directly investigate the
exoplanets when they pass from their respective host stars, known as “transiting”.

A small ratio of light that passes through the atmosphere interacts with atoms and molecules. This light carries some information which is detected by the instruments placed on Webb’s body. Then scientists used this information to study conditions such as temperature, chemical composition and history.

Webb will also explore the Supernova explosion, one of the huge star deaths and the most vibrant events in the universe. Webb also researches Brown Dwarfs: It is a huge astronomical object bigger than the planet, but less bigger than stars.

How will Webb Observe Mars?

“People say, ‘Why would you want to see Mars? Didn’t we send 11,000 ships there?” Hummel says. “Yes. But Hubble was actually very powerful for observing Mars, and so was Webb.” Hubble says it was a widely available spectroscopic instrument. Where the Webb really shines is the infrared, especially in infrared spectroscopy, which allows scientists to analyze it. the chemical composition of an object.

“We will be able to map the surface properties of Mars during the day and at night,” says Hummel. Maps clouds of dust and organic matter such as water and methane.

Methane levels seem to vary with each measurement on Mars, she says, and Webb spectroscopy should look to see if it changes over time across the planet, or if the methane changes with regions on the red planet.

How Will Webb Observe The Asteroids?

Finite Spatial Telescope View the Hubble image of the border of the border trying to describe the distant galaxy, and you can see the strange issue as a strange scratch of physical pictures.

“All of these strange arcs are asteroids that have photobombed with pictures of the galaxy.” But unwanted noise for Hubble will be data with Hammel and other solar systems scientists with Webb. “And it does not solve a photo of an asteroid, but you can get an asteroid spectroscopy,” she says.

The catch here is that most of the asteroids are very similar except for spectrum areas of “fully hidden” on the ground. “This is a problem with a lot of solar system spectroscopy – Some remote spectrum stripes are sorted with the spectrum of the Earth’s atmosphere, such as water vapor that strikes spaces in the spectrum of a remote object.

“There is only a specific window of light that passes through the ground. “Hamam says.” If you want to see what is in this blocked window, you have to go to space.”

How Will Webb Observe The Icy Moons?

NASA’s Europa Clipper will be scheduled for 2024 and arrive in the area of ​​Europa Jupiter’s Moon, which makes spectroscopy in 2030.

Why should we wait?Hamel wants the use of a spectrometer to characterize the composition of the jets of water from Europa.The two moons are abundant with rocks and minerals to call the world marine,warmed by geological activities, and these are the ingredients that can be suitable for aquatic life.

“We will try to put our detectors in the territory where these plumes should be,” says Hamam. “Dangerous. Not dangerous to the spaceship. It’s dangerous because you might not find anything.
But she says that is the beauty of being an interdisciplinary scientist with a guaranteed time.

Why Should We Observe The Ice Giants?

Webb has been in an emergency to explore the Uranus, for four different field views of various infrared (MIRI) corresponding to other wavelengths. This help Hamel and other scientists to understand how the other planetary scientists interact with the upper atmosphere of Uranus with the atmosphere of lower level which they can better image with the existing telescope, and of course, spectroscopy will especially find the presence of hydrocarbons on Uranus.

“We can not only detect these hydrocarbons, but also,” we can find it on the surface and can find out where they ride.”

Neptune is a similar target, and Webb allows scientists to map the structure of Neptune’s atmosphere and how wind, temperature and clouds relate to the planet’s chemistry.

How Will Webb Observe The Dwarf Planets?

Entering the frosty outermost regions of the solar system makes using Webb for local planetary science is more intuitive. Dwarf planets like Pluto, Eris and Makemake are very distant and very cold, and scientists are eager to understand what they are made of.

Dwarf planets, such as Pluto, ERIS, MAKEMAKE, and other KUIPER Belt objects, did not change relatively after the birth of a planetary system,an official said. As an asteroid, Kuiper belt objects have records of the initial solar system, but in that case, the prototype disk slice is much more far away than the material that forms the Rocky Inner Planet.

Pinilla-Alonso is a planetary scientist with the Florida institute,is leading a program to closely examine 59 “trans-Neptunian” objects over 100 hours, a full survey designed to understand the range of differences in these distant bodies, and feeding that information into models for the formation and evolution of the Solar System.

“What we are going after is to really have a good representation of the diversity in the trans-Neptunian belt,” she says, “to be able to answer questions that are related to all the population of icy bodies in the solar system, not only to a few particular objects.”

How Will Webb Observe The Comets?

Comets share the differences between trans-Neptune objects and asteroids, falling towards the sun in icy space and passing through the inner solar system before disappearing again in a long elliptical orbit.

They also represent promising targets for Webb. Webb can once again use spectroscopy to study structure and chemical composition.

“Whatever a comet is, we usually have programs designed to track it. She calls it “opportunity program goals.”

“If another interstellar object like Omuamua shows up, there are already programs approved to do it,” says Hummel. “If we get another hit on Jupiter again, we’re ready.”

The James Webb Telescope is a state of the art telescope that can help us to unravel some mysteries of deep space and with its unique infrared capabilities it can look through asteroids,planets and even clouds.This telescope can even observe the exo planets especially the Uranus And Neptune that are still a mystery and can look for a habitable terrain in space for humans.