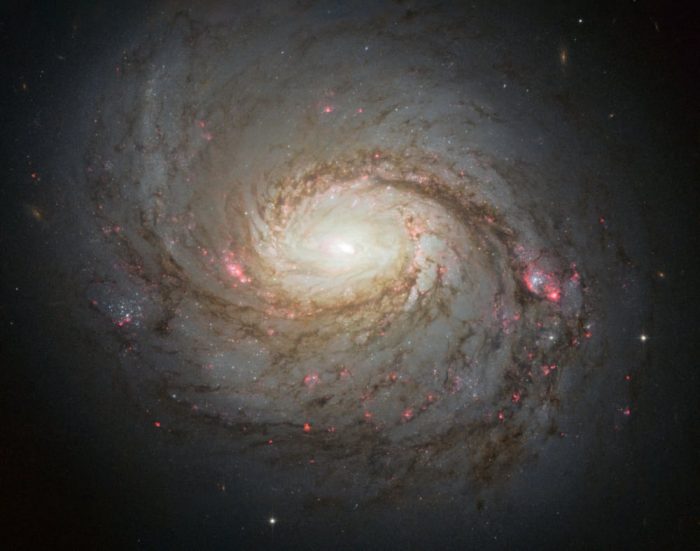 The creation of high-energy neutrinos from outside the Milky Way appears to have verified the function of active supermassive black holes. For the second time, physicists have traversed the gap of intergalactic space to locate these alleged ‘ghost particles’ in the centre of a galaxy.

With this discovery, we may begin a thorough survey of extragalactic neutrino factories and use the characteristics of the neutrinos to comprehend their native settings.

The Messier 77 Or The Squid Galaxy

The galaxy in question is NGC 1068, also known as Messier 77 or the Squid Galaxy, and is a well-known object. It is a stunning barred spiral galaxy that is about 47 million light-years away and is close enough to see with a pair of binoculars.

And tens of high-energy teraelectronvolt (TeV) neutrinos have been counted coming from its direction.

The sole known high-energy neutrino up to this point was a single TeV particle that was traced to an extragalactic blazar designated TXS 0506+056, which is located 3.8 billion light-years away.

This makes the most recent data set, gathered over a decade by the IceCube Neutrino Observatory, a veritable gold mine.

“A source can be distinguished by one neutrino. However, only a multiple neutrino observation will be able to see the hidden core of the most intense cosmic objects “According to IceCube’s lead researcher and physicist Francis Halzen of the University of Wisconsin-Madison.

Although 80 teraelectronvolt-energy neutrinos discovered by IceCube from NGC 1068 are insufficient to fully address all of our issues, they are unquestionably the next significant step in the development of neutrino astronomy.

The presence Of Neutrinos

The Universe is filled with neutrinos, which are almost massless subatomic particles created by radioactive decay. They are among the most prevalent particles in the universe and stream continually through everything. Right now, they are flowing through you. They hardly interact with anything, which is why they are difficult to identify.

Normal matter in the universe may as well be smoke and shadows to a neutrino. They are known as ghost particles for this reason.

However, it is precisely this characteristic that makes them so potentially interesting to examine. They constantly move in a straight line since they are not impacted by the universe.

And only cosmic ray acceleration processes, such as the strong jets produced in the harsh environment surrounding an active supermassive black hole, may produce high-energy neutrinos.

However, finding the neutrinos is necessary if we are to understand these neutrino factories, and this is where IceCube comes in. Photodetectors search for the showers of light generated when neutrinos do occasionally connect with atoms or molecules when buried in the cold darkness beneath the black Antarctic ice.

This is how a close-knit worldwide group was able to recognise 80 high-energy neutrinos in the 1.5 to 15 TeV range that travelled a straight line back to NGC 1068 after carefully examining 10 years’ worth of data gathered by the observatory.

A massive disc and torus of dust and gas around the black hole’s equator. This enters the black hole’s orbit and feeds into it, producing astronomical amounts of heat and light due to the torus and disk’s friction and gravity.

Not all of the material travels past the black hole’s event horizon. Scientists believe that some of it is driven along the black hole’s magnetic field lines to its poles, where it is blasted into space as potent plasma jets that travel through space almost as quickly as light.

We refer to a galaxy as a blazar if the jet is pointing in our way; TXS 0506+056 is one such galaxy, and analysis reveals the 300 TeV neutrino it produced originated from the Earth-directed jet.

NGC 1068’s jet is not pointing in our general direction. In fact, due to the galaxy’s orientation, a large portion of the high-energy light emitted by the active galactic core is hidden by thick dust. The neutrinos may therefore provide a method for probing a black hole that is challenging to research in other ways.

According to physicist Hans Niederhausen of Michigan State University, “Recent simulations of the black hole environments in these objects predict that gas, dust, and radiation should prevent the gamma rays that would otherwise accompany the neutrinos.”

“This neutrino discovery from NGC 1068’s central region will advance our knowledge of the surroundings of supermassive black holes.” According to the research team, the neutrinos are an indication of particle acceleration, and the finding indicates that active galactic nuclei contribute significantly to the neutrino population that fills space.

They add that NGC 1068 may eventually turn into one of the field’s pillars and that the discovery is a breakthrough for neutrino astronomy.

According to physicist Denise Caldwell of the National Science Foundation, which funded IceCube, “NSF initiated an ambitious project to expand our understanding of the Universe by combining established capabilities in optical and radio astronomy with new abilities to detect and measure phenomena like neutrinos and gravitational waves.”

“This new and exciting field, which promises insights into the untapped power of massive black holes and other fundamental properties of the universe,” according to the IceCube Neutrino Observatory, is just getting started. Its discovery of a nearby galaxy as a cosmic source of neutrinos is just the beginning.