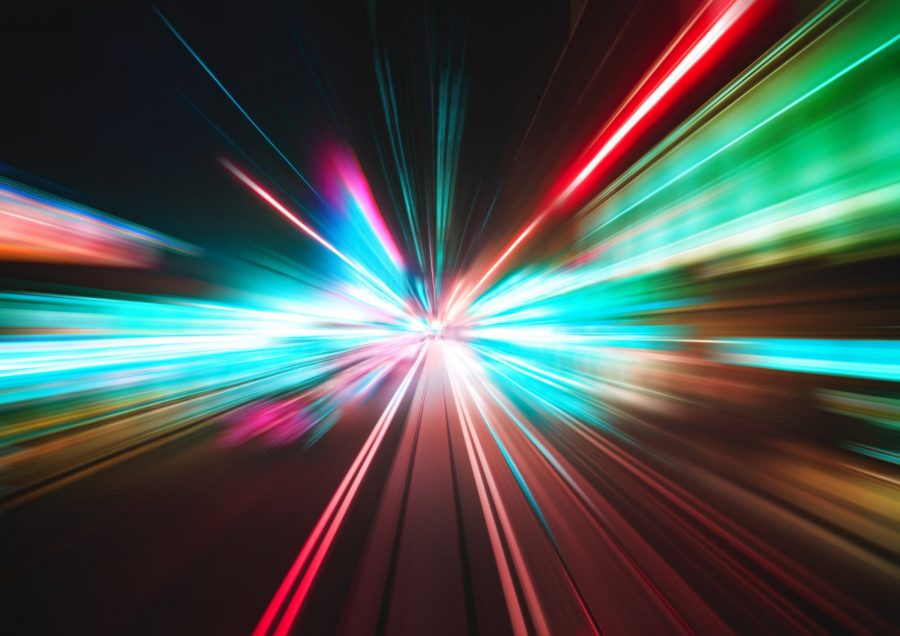 E = MC2 may be the most commonly used equation in physics. Everyone has heard of it, and it has been proven numerous times. Have you converted mass to energy? Tell it to the stars, whose light is produced by the loss of mass during nuclear fusion.

However, there is another way to consider this fundamental equation.

“You can actually look at this process from both sides,” Daniel Brandenburg, a physicist at Brookhaven National Laboratory, tells Inverse.

“In our case, we wanted to take light and convert it into matter.”
That it turns out, is a lot less mundane.

Brandenburg is a member of the STAR collaboration, which includes over 700 scientists from 15 countries who use BNL’s Relativistic Heavy Ion Collider, or RHIC (pronounced “Rick”), to smash gold nuclei together at 99.995% the speed of light.

The researchers were more interested in the near misses than the hits in this experiment. Auras form as ultra-high-energy photons encircle the gold nuclei, and auras collide as nuclei zoom past one another.

When photons (light particles; massless, pure energy) collide, they produce an electron and a positron, their antimatter counterpart — both particles with mass. This is referred to as the Breit-Wheeler Process.

“The part that makes the Breit-Wheeler process so hard to achieve is getting photons that have enough energy,” explains Brandenburg. “We’ve crossed this threshold where we can convert the photons into a real electron-positron pair.

And that’s where we really can achieve what Einstein talked about, where we take the energy from the photons.”

Read: What is the evidence for Dark Energy in the Universe?

E = mc2 is an extension of Albert Einstein’s special relativity theory, which states that an object’s speed affects how it perceives space and time in relation to other objects. (His theory of general relativity incorporates gravity into the equation.)

Two decades after Einstein’s seminal 1905 paper on matter, two theoretical physicists, Gregory Breit and John Wheeler, used his by then famous and accepted equation to deduce the requirements for converting light to matter.

“Everyone believed this process exists,” says Zhangbu Xu, a BNL physicist and a former STAR collaboration’s group leader and spokesperson.

“But no one has ever been able to demonstrate it.”

Xu tells Inverse that if Einstein were alive today, “at this point he would probably say, ‘Hey, what else do you expect?’”

Rafael Alves Batista concurs. Alves Batista, a research fellow at the Autonomous University of Madrid’s Institute for Theoretical Physics who studies the astrophysics of high-energy photons, was not involved in the study.

“The fact that we don’t see gamma rays from farther than a given distance already tells us that there is the… Breit-Wheeler process,” Alves Batista tells Inverse.

This is because high-energy light from very far away in the universe is intercepted through collisions with other photons, making it invisible to detectors here on Earth.

“However, what they are doing needs to be done,” he said, “because there might be some deviation of a prediction.”

Brandenburg says that prediction and experiment “overlap so perfectly that you can barely even see the curve from the data.” This further strengthens the current understanding of how the universe works at both large and small scales.

“We’re really on this threshold where it’s finally possible, and, even for us, it’s only barely possible at this point,” says Brandenburg, speaking of the fact that this experiment required nearly 90 years of technological advances.

The researchers made a significant discovery when they observed polarised light being split into different paths by the extremely strong magnetic fields surrounding the gold nuclei.

“It’s not just proving the Breit-Wheeler process,” says Xu, “but the fact that we can demonstrate those photons are polarized and how we can actually measure that polarization itself.”

This has allowed us to use polarised light to study the magnetic field around highly charged nuclei and gain a better understanding of atomic nuclei physics.

“What the nucleus looks like at high energies is still very much unanswered,” explains Brandenberg. “And with this discovery, we’ve developed an entirely new technique.”

This technique will be critical for BNL’s Electron-Ion Collider, the next-generation collider. Many scientists from the STAR collaboration have contributed to the design of the EIC, which is expected to go online around 2030.

Per Brandenberg, “I think probably the things that will happen in the next 10-20 years will start to push our understanding more because we’re entering this regime where the theory isn’t as well understood.”