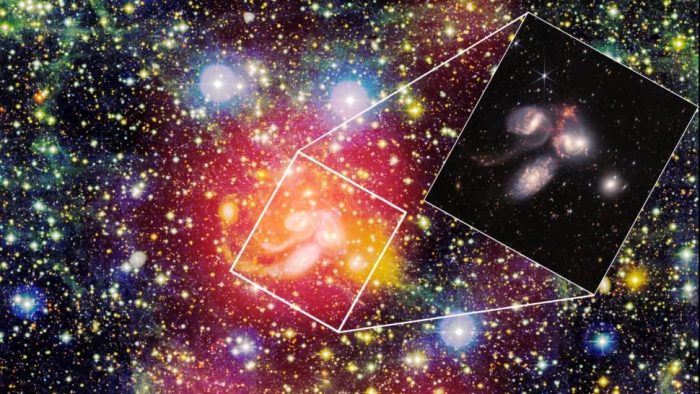 Stephan’s Quintet, a group of five seemingly closely packed galaxies that shine in the Pegasus constellation, is whispering to astronomers the details of galactic history.

These orbs, like all galaxies, began as masses of atomic gas that clumped together and finally compressed in on themselves to generate the stars that would later become their luminaries. Millions of star clusters make up each galaxy; four of them are actively interacting while the fifth is much closer to Earth and stands aloof.

Now, a group of researchers from around the world using the Five-hundred-meter Aperture Spherical Telescope (FAST) in China have discovered that Stephan’s Quintet is surrounded by an atomic gas cloud that is 2 million light-years wide, or roughly 20 times the size of the Milky Way. “This is the largest atomic gas structure ever found around a galaxy group,” said Xu Cong, an astronomer at the National Astronomical Observatories.

What Did The Researchers Find?

According to the researchers, the finding raises a conundrum and will force astronomers to reconsider how gas interacts at the borders of galaxy clusters. Because astronomers would have anticipated UV light to alter the nature of the hydrogen in the cloud, the cloud is a particularly unexpected discovery.

Atoms in an atomic gas cloud will ionise when exposed to ultraviolet light, which causes them to gain or lose electrons and become charged. However, the gas that Stephan’s Quintet observes is not ionized.

What Happens In The Absence Of Ionisation?

The absence of ionization raises the possibility that the gas is a remnant of galaxy formation. It is possible to argue that diffuse clouds of atomic hydrogen far from any stars are the by-products of interactions that created a galaxy.

It is also conceivable that a long-ago collision between two of the galaxies released the cloud that surrounded Stephan’s Quintet.

Even if the cause of the unionized gas is still a mystery, the solution might alter our understanding of how galaxies form and develop.