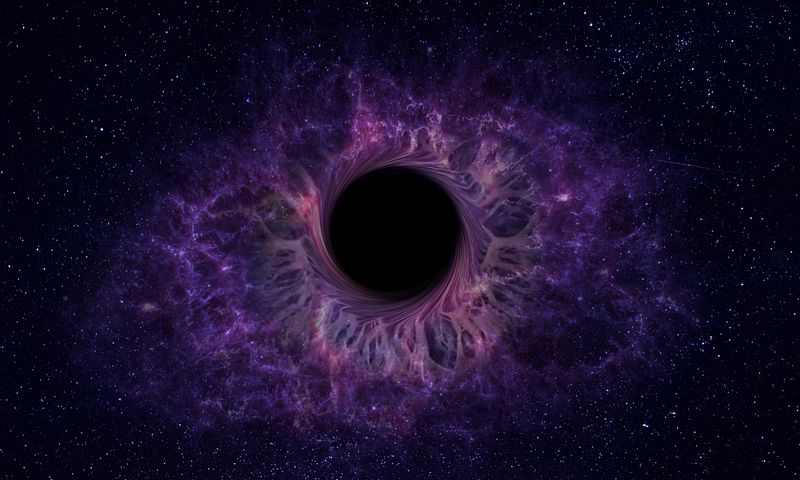 Black holes are among the most amazing and mysterious things in the universe. Big stars undergo gravitational collapse near the conclusion of their lives, which causes the explosion of their outer layers and gives rise to these gravitational behemoths (a supernova).

Meanwhile, the star remnant is so dense that nothing (not even light) can leave its surface, and its gravity gets so strong that it causes the curvature of spacetime around it to become infinite. Because of this, they are invisible to traditional optical telescopes that focus on objects in the visible range.

Astronomers frequently look for black holes in non-visible wavelengths or by observing how they affect nearby objects.

Using the Gaia Data Release 3 (DR3) as a guide, a group of astronomers from the University of Alabama in Huntsville (UAH) has discovered a black hole in our galaxy’s vicinity. According to their findings, this enormous black hole is about 1,550 light-years away from Earth and has a mass that is equivalent to about twelve times that of our Sun.

For astronomers, this black hole offers opportunities because of its mass and closeness

Dr. Sukanya Chakrabarti, the Pei-Ling Chan Endowed Chair in the Department of Physics at UAH, served as the study’s principal investigator. She was joined by astronomers from the Wisconsin-Milwaukee, Hawaii, Wisconsin-Milwaukee Observatories, Rochester Institute of Technology, the Carl Sagan Center of the SETI Institute, UC Santa Cruz, UC Berkeley, the University of Notre Dame, and Yale.

The Astrophysical Journal is currently reviewing the report that details their findings that just went online.

Because they present possibilities to investigate the principles of physics in the most extreme settings, black holes are of great interest to astronomers. Supermassive black holes (SMBH), which are found in the center of the majority of massive galaxies, are one example where they play an important role in galaxy formation and evolution.

Regarding the part noninteracting black holes play in galactic evolution, there are still unanswered concerns. In these binary systems, a black hole and a star are present, but the black hole does not consume the star. Dr. Chakrabari stated in a press release from UAH:

“How these non-interacting black holes impact the Milky Way’s cosmic dynamics is still unknown. If they are numerous, they might have an impact on the dynamics within our galaxy and how it formed. We looked for objects whose brightness might be attributed to a single visible star but which were said to have significant companion masses. You can therefore assume the companion is dark with confidence.”

How Did The Researchers Locate The Black Hole?

Dr. Chakrabarti and her team used information from the Gaia DR3, which had details on almost 200,000 binary stars seen by the Gaia Observatory of the European Space Agency (ESA), to locate the black hole.

The team checked spectrographic data from other telescopes, including the Automated Planet Finder at Lick Observatory, the Giant Magellan Telescope (GMT), and the W.M. Keck Observatory in Hawaii, to further investigate sources of interest.

These tests revealed the presence of a strong gravitational field around a main sequence star. As indicated by Dr. Chakrabari:

“These spectroscopic observations, which provide us with a line-of-sight velocity due to a Doppler shift, allow us to determine the gravitational attraction of the black hole on the visible Sun-like star.

We can determine the mass of the black hole companion, its period of rotation, and how eccentric its orbit is by looking at the line-of-sight velocities of the visible star, which is similar to our own Sun.

These separate spectroscopic data supported the Gaia solution, which showed that this binary system is made up of a visible star orbiting a very large object.”

Due to their closer orbits and tendency to absorb material from their star partners, interacting black holes are usually simpler to spot in visible light. As it is pushed to relativistic velocities (near the speed of light), this material forms a torus-shaped accretion disc around the black hole, becoming highly energetic and releasing X-ray radiation.

Because they do not create these discs and have broader orbits, noninteracting black holes must be deduced by studying the movements of the visible star. Dr. Chakrabarti stated:

“In other words, they are luminous in X-rays due to some interaction with the black hole, frequently due to the black hole consuming the other star. The majority of black holes in binary systems are in X-ray binaries. We can observe X-rays as the matter from the other star falls down this enormous gravitational potential well.

We are staring at a massive black hole in this instance, but it has a long-period orbit of 185 days, or roughly half a year. It isn’t moving closer to the apparent star and is actually quite far away.”

The methods used by Dr. Chakrabarti and her colleagues could result in the identification of a large number of additional non-interacting systems.

There may be a million observable stars in our galaxy that are accompanied by huge black holes, according to current calculations. Even while this only makes up a small portion of the stellar population (which numbers around 100 billion stars), the Gaia Observatory’s accurate observations have helped to focus the search. Over 1 billion celestial objects, such as stars, galaxies, and planets, have been studied by Gaia to date.

Astronomers will be able to learn more about this population of binary systems and the process by which black holes emerge through further research on this population. As outlined by Dr. Chakrabarti:

“Theorists have currently put forth a number of distinct theories, but noninteracting black holes near bright stars are a brand-new population. Therefore, it will probably take some time for us to fully comprehend their characteristics, their formation, and how these channels vary from — or if they do — the more well-known population of interacting, merging black holes.”