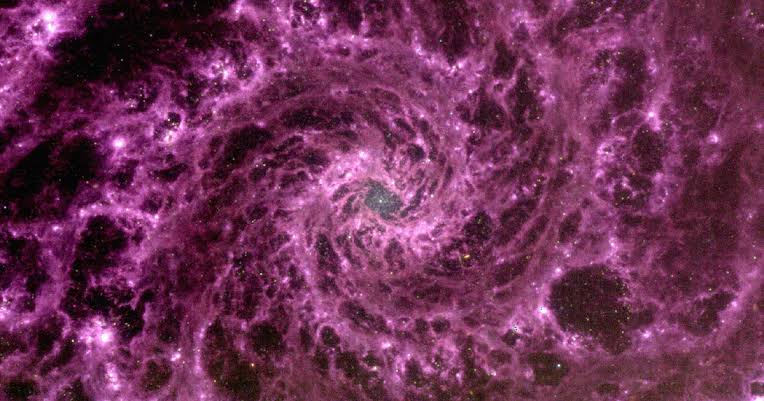 Just days after the first formal release of its first show-off images, astronomers have created a stunning image of galaxy Messier 74 (M74) by combining data from the James Webb Space Telescope (JWST).

In the constellation of Pisces, 32 million light years away, the galaxy Messier 74 (M74) is visible. For any space enthusiast, it’s an excellent target: Because of the galaxy’s position in space, which makes it seem face-on to Earth, it is simple to enjoy its broad spiral arms.

Astronomers are giddy with excitement over the image, which was captured by the Mid Infrared Instrument (MIRI) of the space observatory. It depicts the galaxy’s vast spiraling arms in a gorgeous deep purple.

Gabriel Brammer, an associate professor at the Cosmic Dawn Center of the University of Denmark’s Niels Bohr Institute, offers a fresh perspective on M74.

M74, also known as NGC 628, is a spiral galaxy that has a flat, rotating disc and a fainter halo of stars surrounding it. It is located approximately 32 million light-years from Earth and is frequently used as a textbook example.

The European Space Agency estimates that spiral galaxies make up about 60% of all known galaxies, including our own Milky Way.

How Was This Image Created?

Brammer explains on Twitter that he combined the views from three of MIRI’s nine filters to create a new view of the galaxy after downloading processed raw data that had already been gathered by JWST’s Mid-Infrared Instrument (MIRI).

Because of the image’s exceptional clarity, which showcases JWST’s potential, many of Brammer’s fellow astronomers were enthused by it on Monday.

“Let’s check what JWST saw yesterday…” Oh, oh god,” Brammer tweeted on Monday after posting an image of what seems to be a purple vortex radiating outward in a counterclockwise direction from the galactic center.

A Source Of Data

Gemini Observatory chief scientist Janice Lee described the breathtaking image on Twitter as “we are drinking from a firehose.” Lee oversaw the project that generated the raw data that led to the creation of this image of M74 and is also the executive chair of NASA’s Cosmic Origins programme.

As part of the PHANGS survey, Lee’s team assembled the components of this stunning image. PHANGS, an acronym for “Physics at High Angular resolution in Nearby GalaxieS,” focuses on spiral galaxies because of the “overwhelming” quantity of information about stellar formation they possess.

According to Janice Lee, who wrote a NASA description of PHANGS, “the star life cycle — all in incredible resolution.

Professor of astronomy at the University of Kansas Allison Kirkpatrick tweeted Brammer’s image along with an additional image from the long-since deceased Spitzer infrared space telescope. The comparison images in a tweet from Monday reveal the wide range of cosmic details that JWST will emphasize as it continues to investigate the Universe.

Brammer responded to a few tweets from astronomers and amateur space enthusiasts who wanted to know more about what they were witnessing.

For a little bit additional background, Brammer tweeted that the purple color cast in this image is “genuine” in the sense that interplanetary cigarette smoke emission (PAH molecules) causes the filters used for the blue and red channels to be stronger in comparison to the green.

The Barbara A. Mikulski Archive for Space Telescopes (MAST) portal offered downloads of the raw data. Although certain data have exclusive access terms of 6 months to one year for the team who designed the observations, most science data may be accessed for free and instantly by anyone, according to another tweet from Brammer.