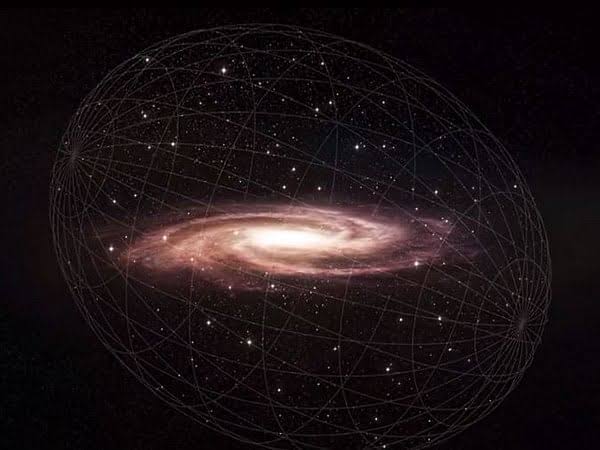 The actual shape of the diffuse star cloud that envelops the disc of our galaxy has been revealed by a recent study. For many years, astronomers believed that the stellar halo, a cloud of stars, was mostly spherical, like a beach ball. The stellar halo is now revealed to be oblong and tilted, much like a freshly kicked football, according to a new model based on recent observations.

The results, which were just published in The Astronomical Journal, provide information on a variety of astrophysical topics. The findings, for instance, shed insight on our galaxy’s past and its evolution while also providing hints for the ongoing search for the enigmatic element known as dark matter.

According to study lead author Jiwon “Jesse” Han, a Ph.D. student at the Center for Astrophysics | Harvard & Smithsonian, “the shape of the stellar halo is a very fundamental parameter that we’ve just measured to greater accuracy than was possible.” The stellar halo’s non-spherical shape—that of a football, rugby ball, or zeppelin, to name a few—has a lot of significant consequences.

Charlie Conroy, Han’s advisor and a professor of astronomy at Harvard University and the Center for Astrophysics, adds, “For decades, the common belief has been that the stellar halo is more or less spherical and isotropic, or the same in every direction. We now understand that the traditional depiction of our galaxy as being contained within a sphere of stars needs to be abandoned.

What Is This The Galactic Halo?

The visible part of what is more generally referred to as the galactic halo is the stellar halo of the Milky Way. Dark matter dominates this galaxy halo, and the gravity it produces is the only way to detect its presence.

Each galaxy has a unique dark matter halo. These haloes act as a kind of superstructure on which common, visible matter is suspended. Stars and other observable galaxy structures are created as a result of that visible matter.

Stellar haloes are therefore important astrophysical targets because they can help us learn more about the formation and interaction of galaxies as well as the fundamental properties of dark matter.

“But because we are a part of the Milky Way, it has long been difficult for astronomers to understand the form of its stellar halo. The stellar halo surrounds our Solar System and reaches out several hundred thousand light years above and below the star-filled plane of our galaxy.

We lack the same type of aerial, outside perspective of our own galaxy’s halo, unlike with external galaxies, where we can simply look at them and measure their halos,” claims Han.

What Is This Halo Made Of?

Further complicating matters, just around 1% of the galaxy’s total star mass is found in the stellar halo, which has turned out to be rather diffuse. However, over time, astronomers have been able to identify a large number of the stars that make up this halo.

These stars can be distinguished from other Milky Way stars by their unique chemical makeup, which can be determined by studying their starlight, as well as by their distances and trajectories across the sky. These investigations have shown astronomers that the distribution of halo stars is not uniform.

Since then, the objective has been to investigate the spatial patterns of star over-densities, which manifest as bunches and streams, in order to determine the true origins of the stellar halo.

The Method Of Observation

The new study by CfA researchers and associates makes use of two significant datasets amassed recently that have never before probed the stellar halo.

The first set comes from the ground-breaking Gaia probe, which the European Space Agency launched in 2013. The positions, motions, and distances of millions of stars in the Milky Way, including some nearby stellar halo stars, have been meticulously measured by Gaia.

The second dataset comes from a ground-based survey called H3 (Hectochelle in the Halo at High Resolution), which was carried out at the MMT at the Fred Lawrence Whipple Observatory in Arizona and was a joint effort between the CfA and the University of Arizona. Tens of thousands of stellar halo stars that are too far away for Gaia to evaluate have been carefully observed by H3 in great detail.

How Was The Halo Formed?

The decidedly non-spherical halo was produced by combining these data in a flexible model that allowed the stellar halo shape to emerge from all of the observations; the football shape fits in well with previous findings.

For instance, the shape independently and strongly supports a leading theory about how the stellar halo of the Milky Way was created. According to this model, a single dwarf galaxy and our much larger galaxy collided 7–10 billion years ago, creating the stellar halo.

The departed dwarf galaxy is amusingly referred to as Gaia-Sausage-Enceladus (GSE), where “Gaia” is the name of the aforementioned spacecraft, “Sausage” is a pattern that appeared when plotting the Gaia data, and “Enceladus” is the name of the Greek mythological giant who was buried under a mountain—rather like how GSE was buried in the Milky Way.

The dwarf galaxy was torn apart as a result of this galactic collision, and the stars that made up the galaxy’s components were scattered throughout a dispersed halo. Such an origin story explains the inherent difference between stellar halo stars and stars born and raised in the Milky Way.

The observations of the study provides a more detailed account of how the Milky Way and GSE interacted long ago. Two clusters of stars in the stellar halo have been observed, giving rise to the football shape, which is scientifically known as a triaxial ellipsoid. The pileups supposedly developed when GSE completed two orbits around the Milky Way.

The heavier Milky Way served as the dwarf galaxy’s greater gravitational attractor, and during these orbits, GSE would have slowed down twice at these locations, known as the apocenters. These pauses caused additional star loss from GSE. In the meantime, the tilt of the star halo suggests that GSE didn’t approach the Milky Way straight on, but rather at an incidence angle.

Why Is Our Galaxy Tilted?

Our galaxy collided with another smaller galaxy 7 to 10 billion years ago, according to Conroy, who notes that this collision is dramatically confirmed by the tilt and distribution of stars in the stellar halo.

In particular, the stellar halo stars would have been expected to dynamically settle into the traditional, long-assumed spherical shape given the amount of time that has passed since the GSE-Milky Way smashup.

The team asserts that the fact that they haven’t speaks to the larger galactic halo. Due to the gravitational pull of this dark matter-dominated structure, which is likely itself out of alignment, the stellar halo is also kept that way.

Conroy asserts that “the slanted star halo strongly implies that the underlying dark matter halo is similarly tilted.” The capacity to find dark matter particles in Earth-based laboratories may be significantly impacted by a tilt in the dark matter halo.

Conroy’s final remark makes reference to a number of ongoing and upcoming dark matter detector research. If astronomers can determine where the substance is more densely concentrated galactically, these detectors may have a better chance of catching an elusive interaction with dark matter.

These regions of dense and fast-moving dark matter particles will occasionally come into contact with Earth as it travels through the Milky Way, increasing the likelihood of detection. The identification of the stellar halo’s most likely configuration has the potential to advance numerous astrophysical studies and provide fundamental information about our place in the cosmos.

“What the galaxy looks like and what the stellar halo looks like are such intuitively intriguing questions to ask about our galaxy,” claims Han. “We are now able to provide an answer to those questions thanks to the research and study being done in this area.”