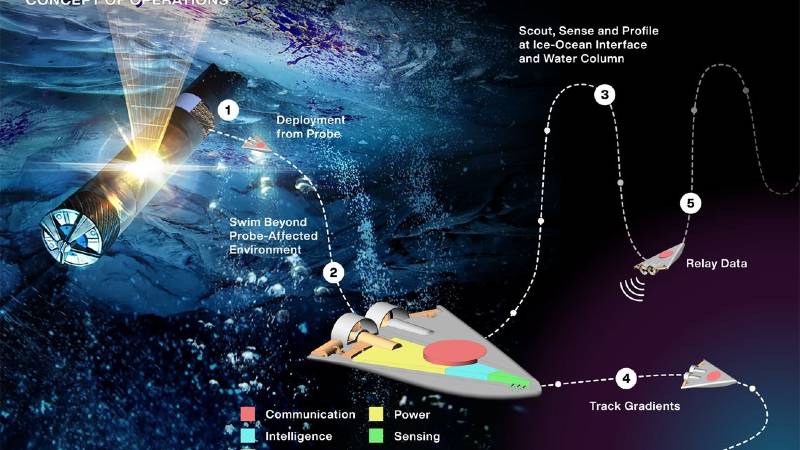 In the future, a swarm of robots the size of cellphones may crawl the seas below the kilometer-thick icy shells of Jupiter’s moon Europa or Saturn’s moon Enceladus in search of extraterrestrial life.

These small robots could be housed inside slender, ice-melting probes that would bore through the frozen surface of the planet to release them underwater, where they could travel far and deep to learn about the new worlds.

Ethan Schaler, a robotics mechanical engineer at NASA’s Jet Propulsion Laboratory (JPL) in Southern California, at least believes that to be the case. The NASA Innovative Advanced Concepts (NIAC) programme has awarded Schaler’s Sensing With Independent Micro-Swimmers (SWIM) idea $600,000 in Phase II funding. Over the following two years, Schaler and his team will utilize the cash to create and test 3D-printed prototypes.

What Is The Concept Of SWIM?

The early concept of SWIM envisioned wedge-shaped robots with a volume of 60 to 75 cubic centimeters and a length of roughly 12 centimeters. They are made so that around four dozen of them might fit within an ice-penetrating probe with a diameter of 25 centimeters, occupying just 15% of the volume of the science payload.

This would free up more space for scientific devices that are more potent but less mobile and could collect data by taking measurements of the ocean at fixed intervals.

Each robot would be equipped with its own propulsion system, onboard computer, ultrasound communications system, temperature, salinity, acidity, and pressure sensors. Additionally, chemical sensors will be included as part of study phase II to track down biomarkers.

When Will The Mission Take Place?

A number of near trips around Jupiter’s moons will be made by NASA’s Europa Clipper mission, scheduled for launch in 2024, in order to collect extensive data when it reaches the moon in 2030.

How Would Communication Take Place?

A communication tether would link the cryobot that releases the swimming robots to the surface-based lander. In turn, the surface-based lander would serve as the point of communication with mission managers on Earth. This is because of its tethered design, the cryobot is unlikely to be able to travel very far from the place where ice meets the ocean.

What if you enter an ocean after all those years and come through the ice shell at the wrong spot? What if you entered the ocean and there was no evidence of life there?

We would be able to peer “over there” and investigate far more of our surroundings by bringing these swarms of robots with us, SWIM team scientist Samuel Howell of JPL said in a press release.

Howell links the underwater robots to the Perseverance rover’s flying counterpart, the NASA Ingenuity Mars Helicopter. The rover’s range is increased by the helicopter, which also sends photographs back to it to aid in understanding how to investigate its surroundings. The several swimming robots in this scenario might be compared to numerous helicopters scanning the region around the cryobot to collect data.

What Are Some Other Features Of The Cryobots?

The cryobot will also be equipped with a nuclear battery, which it will use to melt a route through the ice. When that heat enters the ocean, it might form a thermal bubble that gradually melts the ice above and sets off chemical reactions that could alter the water’s chemistry. SWIM would enable data collecting far from this.

To further “flock” together and acquire overlapping measurements to lower data mistakes, the SWIM robots might imitate fish and birds. The group data may also demonstrate variations in salinity or temperature. For instance, the swarm’s collective sensors may be utilized to locate the cause of a temperature or salinity shift and concentrate attention there for additional investigation.

“If there are chemical or energy gradients, it is how life can begin to form. In a press release, Schaler stated, “To sense those, we would need to move upstream from the cryobot.