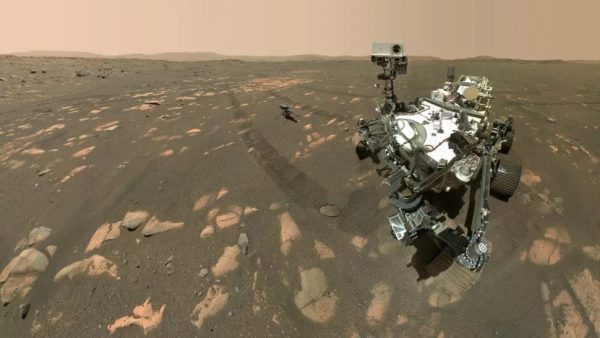 According to NASA’s Perseverance rover, large amounts of dust that gives Mars its butterscotch-pink coloured sky is being blown into the atmosphere by swirling dust devils and occasional but powerful gusts of wind.

The surface of Mars is covered in fine, rust-colored dust, and regional and global dust storms can transport large amounts of this dust into the Martian atmosphere, where it preferentially scatters redder wavelengths of light, resulting in the sky’s color as pink.

Dust storms are seasonal on Mars, usually occurring during the planet’s southern hemisphere summer, but the planet’s skies remain dusty butterscotch long after the season has passed. This consistency denotes that there must be alternative and more stable sources of atmospheric dust.

Dust devils and less regular, powerful gusts of wind have swirled dust into the atmosphere and was seen for the first time in perseverance. Perseverance’s MEDA (Mars Environment Dynamics Analyzer) array of equipment spotted one dust devil each day on average during the rover’s first 216 sols (Martian days)

How Can We Detect Dust Storms On Mars?

MEDA’s Radiation and Dust Sensors can identify dust clouds created by dust devils and gusts of wind based on how airborne dust scatters sunlight, while other MEDA sensors can measure air pressure, temperature, and wind speed.

Newman explained, “This is really the first time we’ve sent these sensors to Mars that can detect dust and where and when it gets lifted locally to the rover.”

Strong midday wind gusts that blow upslope are less common than dust devils, yet they can raise even more dust. The greatest dust devils measured by MEDA at Perseverance’s landing location in Jezero crater were around 890 feet (270 meters) in diameter, but one daylight wind event spanned an area 10 times that size.

According to Ricardo Hueso, a physicist from the Universidad del Pais Vasco UPV/EHU in the Basque Country of Spain and a co-author of the new research, such winds exhibit “great fluctuations and turbulence, which is behavior that corresponds to the passing of a big convective cell.”

The strongest winds are at the leading edge of the convection cells, taking up dust and sending it high into the atmosphere, where it absorbs sunlight and heats the environment.

The warming causes the atmosphere to expand, thus owering the density of the atmosphere. The effect can have consequences for any ship traveling through the atmosphere, whether it’s a probe entering, descending, and landing, or Perseverance’s small helicopter buddy, Ingenuity, which is undertaking short reconnaissance sorties for the rover.

“The change in air density is the most significant concern with Ingenuity,” Newman added. “Because the atmospheric density on Mars changes a lot over the course of a year, the helicopter has different settings for different periods of the year.”

Dust storms remain the most significant source of atmospheric dust, which can range in size from regional storms that last a few days to storms that last months and cover the entire planet in dust.

However, storms alone aren’t enough to retain significant amounts of dust in the Martian atmosphere for long periods of time.

There’s also the possibility that dust-lifting isn’t consistently distributed across Mars. Despite the fact that NASA’s InSight lander, which landed near the Martian equator in Elysium Planitia, has had few dust-lifting episodes, Elysium Planitia and Perseverance’s Jezero crater appear to be quite similar landing sites at first glance.