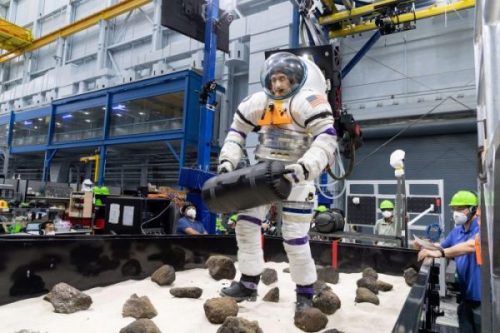 There are different responses to different actions, but in few cases our response is similar. These include nausea while in a moving vehicle. Most commonly is sea sickness that a lot of people go through.

When astronauts return to Earth from space, they experience similar sensations, which can be more intense.

What Happens When Astronauts Land On Earth?

When an astronaut lands, his entire body, including his muscles, bones, inner ear, and organs, begins to adapt to Earth’s gravity.

Astronauts often report dizziness, nausea, and loss of balance in return. These symptoms can last for several days until “earth feet” appear. Ensuring the health of astronauts returning to Earth takes a lot of work, but NASA’s Human Research Program (HRP) team of scientists has a slightly different focus. They want to know how quickly astronauts can complete mission-critical tasks after landing.

What Can Astronauts Do After Landing?

“NASA is soon going to send the first women, people of color and other crew members to the lunar surface via Artemis. After this our eyes will be on Mars,” explains Jason Norcross, a human scientist at NASA’s Johnson Space Center in Houston.

He says crews on Mars and the Moon must be prepared to act without much feedback from Earth operators, especially in emergencies. “So we need to know.

What can astronauts physically do right after they land on the surface of a planet? How long do they have to wait to complete a particular task after landing?”

Before flying to the International Space Station, the crew completed two sets of tasks.

That is, coming out of a simulated lander capsule in a spacesuit and a simulated spacewalk on the surface of a planet.

Then, immediately after returning to Earth, the same crew members try the same task. A simulated escape from the capsule a few hours after landing and a practical spacewalk about a day later.

Tests For The Mockup Capsule

The researchers spent several months developing a mockup of a lightweight metal tube that, when deployed, forms the outline of a space capsule.

This portable frame fits large backpacks. At the airport, near the Crew Dragon capsule landing, the team will set up a mock capsule. Each astronaut enters, lies down, and begins testing.

They will then secure the ladder, grab a survival pack, climb the ladder, and hand off the survival pack to a researcher standing nearby through a hatch at the capsule’s top. Lastly, the astronaut will descend the ladder, walk about 25 feet, and then return to the starting point.

“During pre-flight testing, astronauts can stand up, climb stairs and walk easily. We carried out all of this in minutes,” Norcross said.

“But after the flight, I expect things to be very different. The astronaut stops, balances, breathes, rests, and maybe even a little sick. It could be a fight.” This task also includes many other changes in posture, such as getting up from a supine position with the head turned.

“These posture changes are the most difficult thing for crew members right after landing,” he adds.

“We need to know if this is possible? We think it’s possible, but again, we’ve never previously evaluated an astronaut performing this particular task at any particular time.”

The second task, the simulated planetary walk, will be completed after the astronauts return to NASA’s Johnson Space Center in Houston. Once there, they each perform a different set of tasks in turn.

First, they will try to get dressed without assistance. The researchers will then connect the suit to NASA’s Active Response Gravity Off-Road System (ARGOS).

ARGOS lifts the suit and applies pressure, allowing the astronauts inside to experience some of Earth’s gravity. For this test, ARGOS is tuned to Mars’ gravity, which is about three-eighth that of Earth’s.

Then, after verifying that they can orient and walk, the astronauts climb the ladder, climb through the opening, and descend the same ladder.

At the bottom of this ladder, connect a “supply line” (in this case a large flexible pipe) to the simulated life support module. “We want to simulate what could happen to astronauts on an extraterrestrial mission,” says Norcross. “We have connections at the bottom and there are connections that reach the top.”

They will see if they can move a couple of 30-pound objects back from one end of the rocky field to the other. This item is quite bulky, about the size of a 5 gallon water jug.

“Again, we are trying to get them to do a realistic job, but they’re in a tough pose to see what’s possible right after landing,” continues Norcross.

For both tasks, the astronauts provide verbal feedback as the researcher completes them. After completing the task, the team will survey the effort at each stage.

During simulated walking on Mars, astronauts wear sensors to monitor heart rate and energy expenditure. Astronauts also photograph how to do two things. Comparing pre-launch and post-landing videos will help scientists understand where and why crew members are struggling.

Future iterations will include more participants, more complex and longer tasks, and simulations programmed for the Moon’s gravity.

The information obtained will help NASA develop mission preparations, emergency protocols, space suits, and capsules that will minimize the difficult tasks for astronauts during the first few days after landing on the moon or Mars.

With these studies, HRP is working to find innovative ways to keep astronauts healthy and perform missions as space travel expands to the Moon, Mars and beyond.