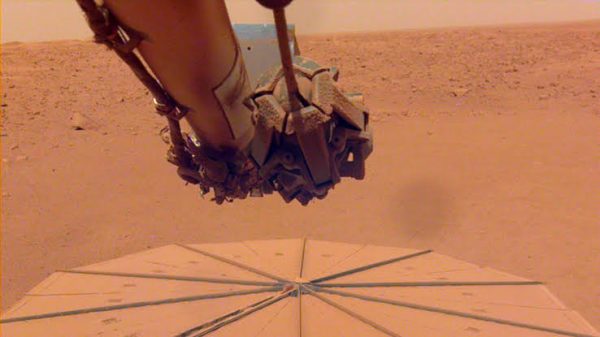 In a recent communication, NASA announced that its InSight Lander has only a few months left for its operation on Mars.

Due to a declining power supply, the InSight Mars lander will discontinue its science operations in the next few months, mission managers announced at a press briefing on May 17.

Has The Insight Mission Stopped Its Scientific Operations?

The amount of power generated per Mars day, or sol, has been decreased to around 500 watt-hours due to Martian dust covering the solar panels. The solar panels on InSight produced roughly 5,000 watt-hours each when it landed in November 2018.

At the meeting, Kathya Zamora Garcia, InSight’s deputy project manager said, “We do anticipate having to complete all InSight activities at the end of the calendar year, not because we want to turn it off, but sadly we don’t have the energy to run it.”

What Is The Contribution Made By The Insight Mission?

InSight’s mission would have lasted nearly twice as originally expected (four Earth years instead of the intended two), and it might have detected over 1,300 marsquakes during its career.

A magnitude 5 event was recently discovered by the lander, making it the greatest marsquake ever observed on another world. The mission gathered unparalleled information on the structure and interior of Mars.

During the news conference, Bruce Banerdt, InSight Principal Investigator, stated, “One of InSight’s legacies is that it truly proves the technology of seismology for planetary research.” “For the first time in history, we’ve been able to map out the inside of Mars.”

“InSight has revolutionized our understanding of rocky planet interiors and paved the way for future missions,” said Lori Glaze, NASA’s Planetary Science Division director. “What we’ve discovered about Mars’ core structure can be applied to Earth, the Moon, Venus, and even rocky planets in other solar systems,” says the researcher.

What Happened To The InSight’s Solar Panels?

The solar panels on InSight have been covered in a thick blanket of Martian dust. As happened for the Spirit and Opportunity Mars rovers, the crew was hoping the dust devil would clean dust from the panels.

Unfortunately, this did not happen. After that, the inventive engineering team took matters into their own hands.

They then took advantage of the magnetic properties of Mars dust to clear off the panels on windy days since it is charged with static electricity. InSight was told to scoop up new Martian soil and place it on the solar panels’ edge, attracting the dust that was already there.

According to Garcia, this smart method increased InSight’s energy generation by around 5% each time, and the maneuver was done successfully six times till now.

What Happens During The Winters On Mars?

As Mars enters in winter, more dust will stay in the atmosphere and less sunlight will be available, the dust collection will likely be more worsen.

Due to the Insight’s diminishing power, the lander’s robotic arm will be placed in its resting posture (dubbed “retirement pose”) for the final time later this month.

What Are The Assumptions Of The Scientists?

According to the team, if just 25% of InSight’s panels were swept clean by the wind, the lander would acquire around 1,000 watt-hours every sol, which would be enough to continue collecting data.

While on the other hand, InSight’s non-seismic instruments will rarely be turned on after the end of May at the current pace of power decline.

Scientists are now prioritizing electricity for the lander’s seismometer, which will run at specific times of the day, including at night, when winds are calmer and marsquakes are easier to detect.

They are expecting the seismometer to be shut off by the end of the summer, bringing the mission’s science phase to an end

By that time, InSight might have enough power to take occasional pictures and communicate with Earth. However, the team anticipates that by December, power will be so low that InSight will simply just stop responding.