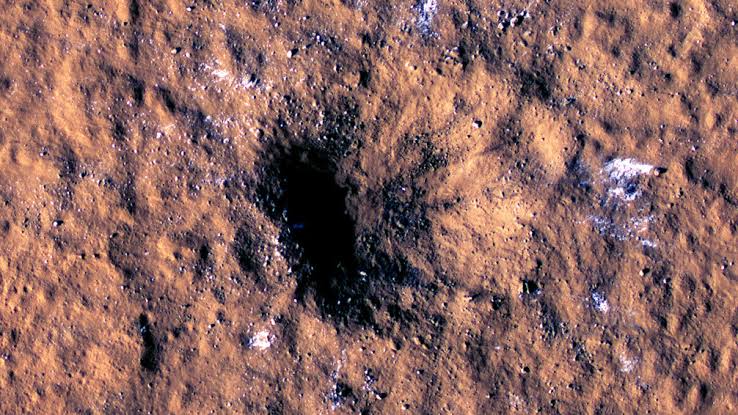 Last December 24, a magnitude 4 marsquake was detected by NASA’s InSight lander. Scientists only discovered the cause of the quake later: a meteoroid strike that was reportedly one of the largest to hit Mars since NASA first started exploring the cosmos.

A further revelation that has ramifications for NASA’s future intentions to send astronauts to the Red Planet is that the meteorite unearthed boulder-size shards of ice that were buried closer to the Martian equator than had previously been discovered.

What Was Scientists’ Observation?

When researchers compared photographs taken by NASA’s Mars Reconnaissance Orbiter (MRO) before and after the quake and noticed a brand-new, gaping crater, they came to the conclusion that the earthquake was caused by a meteoroid strike.

Two publications that were published in the journal Science on Thursday, October 27, provide a rare opportunity to observe how a significant impact rocked the ground on Mars.

The meteoroid’s estimated size is between 16 and 39 feet (5 and 12 meters), making it tiny enough to burn up in Earth’s atmosphere but too large to burn up in Mars’ thin atmosphere, which is only 1% as dense as Earth’s.

Related: Traces Of Ancient Ocean Has Been Discovered On Mars

The Impact Of The Meteoroid

The impact, which occurred in an area known as Amazonis Planitia, created a crater that was 70 feet (21 meters) deep and 492 feet (150 meters) broad. Some of the impact’s ejecta were launched up to 23 miles (37 kilometers) in the air.

This is thought to be one of the largest craters that has ever been seen developing anywhere in the solar system, with pictures and seismic data documenting the process. On the Red Planet, there are other larger craters, but they are much older and predate any Mars missions.

As the head of InSight’s Impact Science Working Group, Ingrid Daubar of Brown University noted, “It’s unprecedented to identify a fresh impact of this level.” “We got to witness it, and it’s an incredible moment in geologic history.”

The End Project Of InSight

Due to dust gathering on its solar panels in recent months, InSight has witnessed a sharp drop in output. The science of the project will now come to an end when the spacecraft shuts down within the next six weeks.

The crust, mantle, and core of the planet are being studied by InSight. The size, depth, and makeup of Mars’ deep layers have been exposed via seismic waves, which are essential to the mission. InSight has recorded 1,318 marsquakes since its November 2018 landing, some of which were brought on by minor meteorite strikes.

Surface waves, a type of seismic wave that ripples along the top of a planet’s crust, were first noticed in the earthquake that followed the impact last December. The second of the two Science articles on the large impact explains how researchers utilize these waves to examine the composition of Mars’ crust.

InSight scientists told the rest of the team that a large marsquake had been found on December 24 in late 2021. On February 11, 2022, the crater was first spotted by scientists from Malin Space Science Systems (MSSS), which built and maintains two cameras atop MRO.

The team was able to pinpoint a 24-hour window in which the collision happened thanks to the blast zone of the impact being apparent in MARCI data. The big marsquake that occurred on December 24 was definitely triggered by a meteoroid strike because these measurements were in agreement with the seismic epicenter.

Liliya Posiolova, who oversees the Orbital Science and Operations Group at MSSS, said, “The image of the impact was unlike any I had seen before, with the gigantic crater, the exposed ice, and the spectacular explosion zone preserved in the Martian dust.” I couldn’t help but picture what it must have been like to watch the collision, the air blast, and the debris being thrown kilometers away.

Why Is It Important To Observe The Formation Of Craters?

To improve the geologic history of the planet, it is essential to determine the pace at which craters occur on Mars. More craters can be found on older surfaces, like those of Mars and our Moon, than on Earth because of erosion and plate tectonics, which remove older features from the surface of our planet.

Additionally, newly formed craters reveal subsurface materials. The HiRISE color camera on the MRO was used to capture images of the huge chunks of ice that were thrown around by this collision.

Astronauts will need access to subsurface ice because they can use it to meet a number of demands, such as those for drinking water, agriculture, and rocket propellant. This is close to the Martian equator, which is the warmest region of Mars and a desirable destination for humans, buried ice has never been discovered.