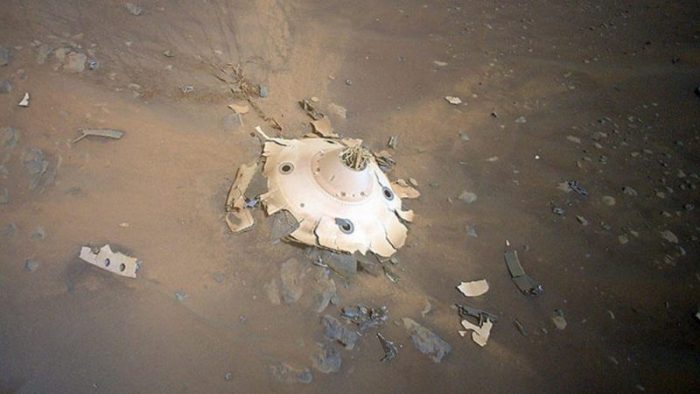 Earlier this month it was reported that the Perseverance Rover had finally found its parachute and backshell far in the distance. This is the device that brought the rover safely to the surface of Mars on February 18, 2021.

But now the amazing Ingenuity helicopter captures better pictures of these items as a result of hovering over the Martian surface on its 26th flight.

What Is Its Condition?

NASA said the backshell, a white broken piece of equipment that looked like a flying saucer, might have impacted the surface at a speed of about 126 km/h which was planned all along.

Read: In Winters, Mars Surface Is As Cold As Dry Ice (Carbon Dioxide)

What Were The Functions Of These Equipment?

These items are required to bring Perseverance safely to the surface during Martian Entry, Descent and Landing (EDL), also known as Seven Minutes of Terror.

What Happens During The Landing?

Due to atmospheric drag (and the use of small thrusters to keep the lander on target), the heat shield-covered backshell decelerated the spacecraft to below 1600 km/h (1000 mph).

It is safe to deploy a supersonic parachute at this point. The parachute slows the lander’s speed to the point where the body and the parachute drop (about 2.1 km and 1.3 miles high), so the rocket’s hovering stage, called the sky crane, gently lowers the rover to the surface.

These seven minutes are quick and stressful as everything has to happen automatically, without the involvement of any engineer back from the Earth.

Read more: Here’s What Elon Musk Said When Questioned About The Life on Mars?

Why Do NASA And Other Space Enthusiasts Love These Debris?

NASA engineers and other space enthusiasts love to see these objects. As it can provide information about how well these equipment will perform in the event of a breakage and provide valuable information for future missions.

Ingenuity’s 26th flight on April 19, 2022,
provides what future engineers have been waiting for. Ingenuity took a total of 10 aerial photos of the debris zone.

One of the upcoming missions that will benefit the most from this image is the upcoming Mars Sample Return Lander, part of a multi-purpose campaign to bring samples of Martian rock, atmosphere, and perseverance sediment back to Earth for detailed analysis. The mission’s engineers requested this image from the Ingenuity team.

Ingenuity team leader at NASA’s Jet Propulsion Laboratory, Teddy Tzanetos, said in his press release, “NASA has expanded its Ingenuity flight to achieve a groundbreaking flight like this.”

“Every time we fly, Ingenuity opens up new horizons and provides a perspective that no previous planetary mission has been able to achieve. The Mars Sample Return Reconnaissance Request is a perfect example of the usefulness of aerial platforms on Mars.” NASA said it would take several weeks to make a final decision.

It would be surprising if they could provide even a single set of engineering information that we can use to confirm that our system works the way we think it is, or to plan the return of samples from Mars. If not, the photos are still phenomenal and inspiring.”