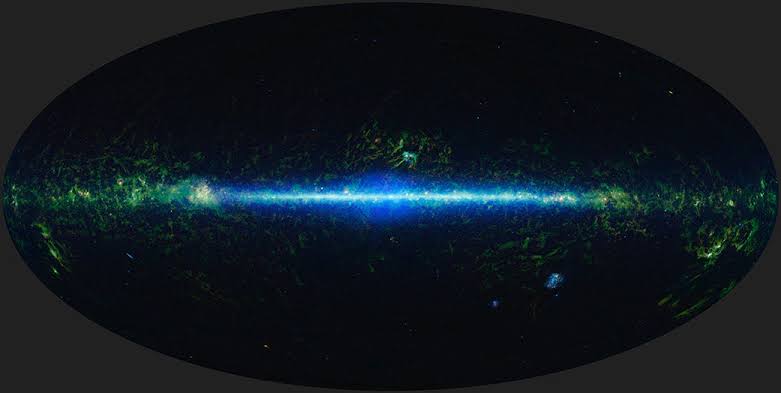 The NASA NEOWISE spacecraft, which stands for Near-Earth Object Wide Field Infrared Survey Explorer, makes one trip halfway around the Sun every six months, collecting data in all directions. These photos are stitched together to create a “all-sky” map that displays the location and brightness of hundreds of millions of objects.

Scientists have generated what is effectively a time-lapse video of the sky, displaying changes that span a decade, using 18 all-sky maps produced by the spacecraft (with the 19th and 20th to be revealed in March 2023).

What makes a map a priceless resource?

For astronomers, each map is a priceless resource, but when seen in a time-lapse sequence, they become even more valuable for attempting to grasp the nature of the cosmos.

According to Amy Mainzer, the NEOWISE main investigator at the University of Arizona in Tucson, “If you walk outdoors and gaze at the night sky, it can seem like nothing ever changes, but that’s not the reality.” “Stars are erupting and flare up. Asteroids are speeding by. Stars are shattered by black holes. The cosmos is a very lively and busy place.

NEOWISE began as a data processing project to recover asteroid detections and characteristics from WISE, an observatory launched in 2009 and charged with scanning the whole sky for objects outside of our solar system. The detectors used by the spacecraft were sensitive to infrared light because they were cryogenically chilled.

Numerous cosmic objects, including some of the most luminous galaxies in the cosmos and cold, nearby stars, emit infrared light, which is invisible to the human eye.

Why did the Wise Mission end?

The WISE mission came to an end in 2011 when the onboard coolant, which was required for some infrared studies, ran out, but the spacecraft and several of its infrared detectors were still in operation.

It was therefore modified by NASA in 2013 to track asteroids and other near-Earth objects, or NEOs. The name of the mission and the spacecraft were both changed.

Nearby brown dwarfs appear to move faster across the sky than further away stars moving at the same speed. This is because of their proximity to Earth. Therefore, searching for moving items among the billions of other objects in the catalogue can help you spot brown dwarfs.

Backyard Worlds: Planet 9 is a companion project to CatWISE that asks volunteers to comb through NEOWISE data in search of moving objects that computer searches could have missed.

About 200 brown dwarfs were discovered within 65 light-years of our Sun using the first two WISE all-sky maps. An extra 60 Y-dwarfs, the coldest brown dwarfs, were revealed by the supplementary maps, doubling their number already known.

When were Dwarfs discovered?

About 200 brown dwarfs were discovered within 65 light-years of our Sun using the first two WISE all-sky maps. An extra 60 Y-dwarfs, the coldest brown dwarfs, were revealed by the supplementary maps, doubling their number already known.

In terms of how and when they developed, Y-dwarfs may have a weirder tale to tell than warmer brown dwarfs. The variety of objects in our solar vicinity are made more clear by these discoveries.

Additionally, a more thorough census of brown dwarfs around the Sun reveals to researchers our galaxy’s star formation’s efficiency and when it first started.

Studies on how stars develop have also benefited from observing the sky change over a period of more than ten years.

What does Neowise look for?

NEOWISE can look inside the dust-enshrouded protostars, or hot gaseous balls that are well on their road to becoming stars. Protostars flicker and flare over the years as they gather more mass from the dust clouds around them.

With NEOWISE, researchers are continuously observing nearly 1,000 protostars to learn more about the origins of stars.

Significance of NEOWISE’s In Observation Of Black Hole.

Black hole knowledge has also been advanced thanks to NEOWISE’s data. At the nuclei of far-off galaxies, the first WISE scan found millions of supermassive black holes.

In a new study, researchers used NEOWISE data and an echo mapping technique to determine the size of discs of hot, blazing gas encircling far-off black holes, which are too small and too far away for any telescope to discern.

The WISE project scientist and astronomer Peter Eisenhardt at NASA’s Jet Propulsion Laboratory remarked, “We never thought that the spacecraft would be running this long, and I don’t think we could have envisioned the research we’d be able to accomplish with this much data.”

An Overview of the Mission

The Planetary Defense Coordination Office of NASA, a division of the Science Program Directorate in Washington, contracts with NASA’s Jet Propulsion Laboratory in Pasadena, California, to manage and run the NEOWISE mission.

The scientific apparatus was created by the Space Dynamics Laboratory in Logan, Utah. The spacecraft was made by Ball Aerospace & Technologies Corp. of Boulder, Colorado. IPAC at Caltech in Pasadena handles the processing of scientific data. NASA’s JPL is overseen by Caltech.

For NASA’s Science Mission Directorate, JPL oversaw and ran WISE. The lead researcher was Edward Wright from UCLA. The mission was chosen through a competitive selection process through NASA’s Explorers Program, which is run by the Goddard Space Flight Center in Greenbelt, Maryland.