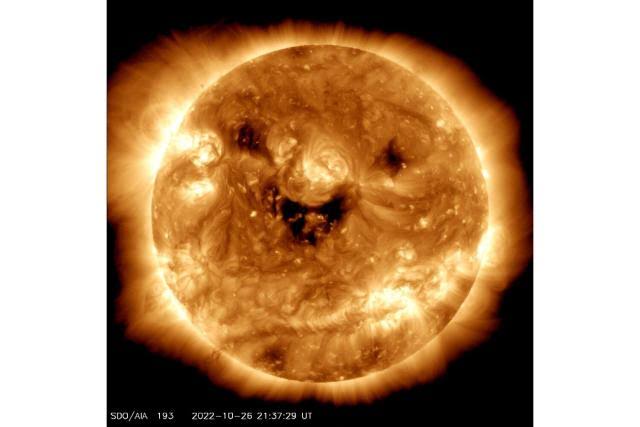 Sometimes all it takes to make your day better is an unexpected smile. Well, it doesn’t get much bigger than this for that kind of joyful surprise.

NASA astronomers have observed the Sun emitting an extraordinary, joyful grin, in a dazzling display sure to make you smile.

This amazing photograph, which was posted on NASA’s Sun Twitter account, shows the Sun appearing gloriously bright in a variety of ways.

Of fact, this “smile” isn’t really a smile at all. According to NASA, what we are seeing are coronal holes, which are the dark patches. These holes are where quick bursts of solar wind are released into space.

Among all the bizarre solar oscillations the Sun frequently displays, it just so happens that two of these coronal holes somewhat like blinking eyes, while a third oddly resembles an animated smile.

Pareidolia, a condition in which we think we perceive things like faces in seemingly random patterns, is what’s really going on in this situation. It’s a mental trick, but this time it’s being performed on a gigantic, Sun-sized scale.

As several astute Twitter users have noted, the Sun’s face in this image doesn’t only appear to be a smiling face.

That exultant grin’s specific proportions are strikingly reminiscent of the facial structure of a certain fabled antagonist from Ghostbusters lore: the Stay Puft marshmallow guy.

Even if it’s merely another instance of people seeing something that isn’t actually there, the expression “separated at birth” even comes to mind. However, even if this is just a meaningless confluence of enigmatic solar physics, we should still find humour in it. Enjoy then! Additionally, make an effort to find the good things in life wherever you can.