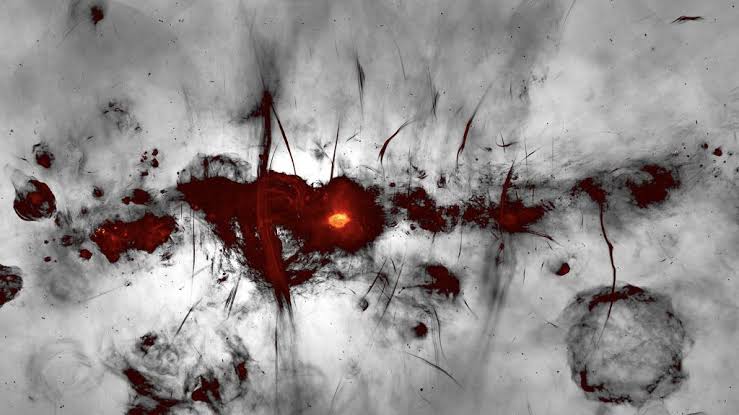 Since his initial discovery of a family of large-scale, highly organized magnetic filaments dangling in the center of the Milky Way in the early 1980s, Northwestern University astronomer Farhad Zadeh has been both captivated and perplexed by them.

After 40 years, Zadeh is still as enthralled—though probably a little less perplexed.

Zadeh and his colleagues have introduced two potential theories for the filaments’ unidentified origins for the first time with the recent discovery of filaments that are similar to those in other galaxies.

What Caused These Filaments?

The filaments may be caused by an interaction between large-scale wind and clouds, according to a recent research by Zadeh and his co-authors that was published earlier this month in The Astrophysical Journal Letters, or they may be caused by turbulence inside a weak magnetic field.

“We have a lot of knowledge about the filaments in our own Galactic Center, and now a new population of extragalactic filaments is starting to emerge, according to Zadeh. Despite the very diverse surroundings, the basic physical mechanics for both populations of filaments are comparable.

The objects are related, but the filaments outside the Milky Way are older, more distant—in terms of both time and space—very distant—cousins.”

Professor of physics and astronomy at Northwestern University’s Weinberg College of Arts and Sciences and a specialist in radio astronomy, Zadeh is a part of the Center for Interdisciplinary Exploration and Research in Astrophysics.

Something Big Is Occurring.

The initial filaments that Zadeh found towered close to the Milky Way’s center supermassive black hole and were as long as 150 light years. Zadeh increased his observational database by over 1,000 filaments earlier this year.

The one-dimensional filaments in that batch occur in groups and pairs, frequently evenly spaced, stacked side by side like harp strings or pouring sideways like individual ripples in a cascade.

Zadeh revealed the mysterious filaments are made up of cosmic ray electrons that are whirling along a magnetic field almost as quickly as light. Zadeh continued to wonder where the filaments came from despite having solved the mystery of what the filaments were composed of.

As a result of the discovery of a brand-new population outside of our own galaxy, astronomers now have more opportunity to study the physical processes taking place around the filaments.

One billion light-years away from Earth, amid a concentrated tangle of millions of galaxies called a galaxy cluster, are the newly discovered filaments. A few of the cluster’s galaxies are active radio galaxies, which seem to be favorable environments for the development of large-scale magnetic filaments. Zadeh was astounded when he first noticed these recently discovered filaments.

“I was ecstatic to see these incredibly beautiful structures after studying filaments in our own Galactic Center for all these years, ” he remarked. “These filaments were discovered in other parts of the universe, which suggests that a universal event is taking place.”

The new population of filaments resembles the filaments in our Milky Way in appearance, but there are some significant distinctions. For instance, the filaments outside of the Milky Way are substantially longer—between 100 and 10,000 times longer. They also have fewer magnetic fields and are much older.

The majority of them oddly dangle at a 90° angle from black hole jets into the immense vacuum of the intracluster medium, or the region tucked in between the cluster’s galaxies.

However, the newly found population shares the same length to width ratio as the filaments of the Milky Way. And it appears that the same methods are used by both groups to transmit energy.

The electrons in the filaments are more energetic closer to the jet, but as they descend further, they become less energetic. The seed particles required to form a filament may be provided by the black hole’s jet, but an unidentified force must be driving these particles along astounding distances.

Some of them are incredibly long—up to 200 kiloparsecs, according to Zadeh. “That is around four or five times the size of the Milky Way as a whole. Their electrons’ exceptional long-term bonding is what makes them so unique. It would take a proton 700,000 years to cross the length of the filament at the speed of light. Additionally, they do not move at the speed of light.”

Promising Potential Of The Research

In the new research, Zadeh and his colleagues postulate that the filaments’ origins could be as straightforward as the collision of galactic wind with a barrier, like a cloud. The wind forms a comet-like tail behind the obstruction as it curves around it.

Wind originates from the galaxy’s own rotation, according to Zadeh. “It is comparable to sticking your hand out of a moving car’s window. Even though there isn’t any wind outside, the air is still moving.

The wind produced by the galaxy’s motion may be pushing through areas where the cosmic ray particles are relatively loose. The material is swept, and a filamentary structure is produced.”

The Swirling Of The Galaxies

However, simulations present a different real-world possibility. Long, filamentary structures appeared as scientists recreated an active, turbulent medium. According to Zadeh, gravitation can alter and stir the medium as radio galaxies pass across it.

Then, areas of swirling eddies develop in the medium. The weak magnetic field can become stretched, folded, and amplified after wrapping around these eddies, finally developing into elongated filaments with a high magnetic field.

Zadeh continues to be in awe of the fresh discoveries despite the numerous unanswered questions. He replied, “These strands outside our galaxy are all very old. “They almost seem to be from a different time in the history of the cosmos, but they still let the inhabitants of the Milky Way know that the filaments share a common ancestor. I find this to be amazing.”