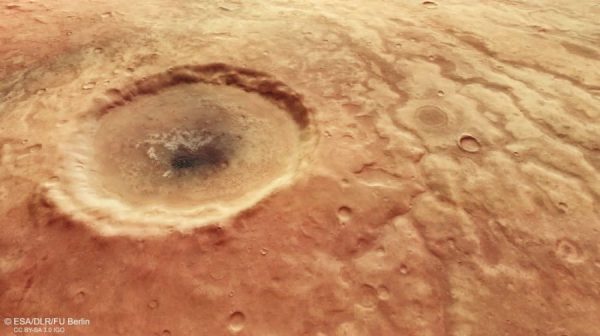 A stunning image captured by a spaceship orbiting Mars could be enough to give one a Lovecraftian nightmare.

A massive, city-sized, unknown crater gapes on the surface of Mars well below the camera of ESA’s Mars Express, smears of darker elements making it appear like a giant eye gazing up to the stars.

However, the image’s objective isn’t to give you the creeps; satellite photos can help us better comprehend Mars’ geology and history.

The Crater That Resembles An ‘Eye’

The crater, which is 30 kilometers (18.6 miles) large, is located in the Aonia Terra region of Mars’ southern hemisphere. It’s deeply cratered, and the topic of the new Mars Express photographs is far from the largest or most striking; it’s not far from the 200-kilometer-wide Lowell Crater.

What Is Late Heavy Bombardment?

Massive impacts are assumed to have carved out Lowell and many of the craters in the area about 4 billion years ago, during a destructive phase of the young Solar System known as the Late Heavy Bombardment.

Was Earth Also Blasted With Asteroids?

Earth, too, was blasted, a process that is considered to have seeded the young planet with water and organic compounds, but atmospheric and seismic processes have wiped much of the evidence from the surface of our world.

The data survives on Mars, which is barren and geologically much quieter, providing us with a tool for comprehending more chaotic periods in the Solar System’s history.

Aonia Terra and other regions on Mars can also give information about the planet’s makeup. A forceful impact exposes material that would otherwise be hidden beneath the surface, resulting in novel geologies and compositions on the surface. The surface composition of the region depicted in the new photograph appears to be diverse and variable.

Where Is This Crater Located?

The nameless eye crater is located in topography hollowed out by channels, which were most likely formed billions of years ago by rivers of liquid water flowing across the surface.

Traces of darker material may be observed in these channels, and some of them appear to be raised – possibly as a result of erosion-resistant material settling in dried-up riverbeds and surviving even when the river’s walls are swept away by strong winds.

Darker material, in the form of a murky, undulating dune, may also be seen near the crater’s core. Conical mounds and buttes can also be seen in the crater, indicating that it serves as a form of catchment for materials.

How Can These Images Help Scientists?

Closer inspections and a larger suite of instruments could disclose more precise information about the crater and its surroundings, but what we can learn even from photographs taken at such a distance is astounding.

The High Resolution Stereo Camera records not only the colors of minerals, but also the height of features, resulting in a comprehensive dataset about Mars’ surface.

And, just in case you’re still concerned, none of those facts point to any eyeballs on Mars. That isn’t to say there aren’t any. Is the red nothingness staring back at you as you stare into it, the question remains the same?