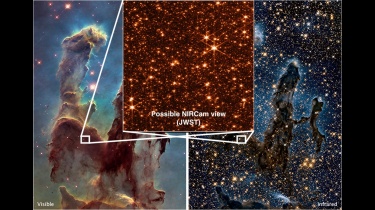 NASA will release the first science photographs collected with the James Webb Space Telescope on July 12, 2022.
Here’s what you should be hoping for.

We explore the Universe by gathering light in astronomy. Using only visible light, on the other hand, is quite limited.

Optical astronomy ignores most features since it only studies wavelengths between 400 and 700 nanometers.

The Pillars of Creation are one of Hubble’s most famous targets.

A tremendous cosmic race ends there, some 7000 light-years away, within the Eagle Nebula.

The visible light shows neutral matter, which absorbs and reflects the light from the stars around it.

Inside, new stars are busily forming, evaporating the pillars.

External star radiation burns away the neutral stuff outside.

The race is on to produce new stars inside the gas before it vanishes completely.

This structure may be seen evolving in Hubble’s twin photos, which were taken 20 years apart.

Other wavelengths of light, on the other hand, disclose what’s going on behind the dust.

Near-infrared images penetrate through the dust to reveal newborn stars hidden within.

Spitzer, a NASA satellite, had already looked at JWST’s wavelengths.

It’s the ideal “first science” target for JWST, because of its significantly greater light-gathering power and resolution.

1 thought on “How JWST’s First Science Images Will Amaze Everyone?”