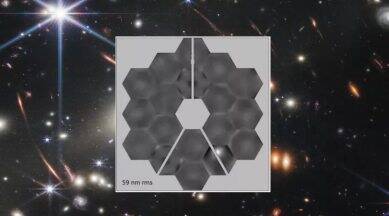 Since July, the James Webb Space Telescope (JWST; often known as Webb) has started collecting scientific data while in orbit.

More About The Early Stage

Even at this early stage of its operation, the observatory is already providing scientists with a fresh perspective on the cosmos and operating better than anticipated.

And despite a picky wheel and a steady stream of strikes from tiny space rocks, that effort is moving forward at a rapid speed.

Related: Webb’s New Picture Of Iconic ‘Pillars of Creation’ Is A Feast For The Eyes

What Happened During The Presentation Of Nasa?

During a presentation to NASA’s Astrophysics Advisory Committee on Monday, October 17, Eric Smith, the project scientist for JWST, remarked, “We knew we were going to be getting micrometeoroid strikes throughout the mission.”

And despite a picky wheel and a scattering of strikes from tiny space rocks, that work is progressing at a rapid rate.

What does the project tell us?

The JWST’s project scientist, Eric Smith, said during a presentation to the NASA Astrophysics Advisory Committee on Monday (Oct. 17), “We knew we were going to be getting micrometeoroid strikes throughout the mission.” We are still in terrific shape since we anticipated it and are seeing it.

According to Smith, Webb is exceptionally prone to these effects. JWST’s primary mirror isn’t enclosed in a protective tube like the Hubble Space Telescope’s is. Smith described it as a catcher’s mitt when contrasted to more protected observatories because it is 21 feet (6.5 meters) long and exposed to space.

Related: Watch DART Impact Through The Eyes Of Webb And Hubble

What was the JWST encounter?

According to Smith’s slides, JWST has now encountered a total of 33 micrometeoroid occurrences. The largest and most harmful micrometeoroid, which damaged the observatory’s mirror in late May and left a mark on one golden hexagon, occurred before JWST started conducting science observations.

According to the team’s estimation, a strike of that size ought to happen approximately once per year, Smith said.

So, he said, “We received that at five months ago. Since there hasn’t been another one, the numbers still support our expectations.

What is the team planning about?

Although the team isn’t very concerned about the impacts, they are considering planning observations such that the mirror isn’t looking directly in the direction the observatory is moving, similar to turning away from a particularly strong gust of wind, to lessen micrometeoroid impacts.

This step would, however, add to the already challenging task of putting the JWST’s observing schedule together.

What alters the target’s visibility?

It truly doesn’t matter if a target is visible; it only alters when it is, according to Smith.
The crew is also working to fix a problem with the observatory’s Mid-Infrared Instrument in the meantime (MIRI).

Late in August, the JWST crew noticed friction in the wheel and halted medium-resolution spectroscopy.

The team is currently attempting to determine the root of the problem, after which they will design a response strategy for NASA’s anomaly review board to approve.

They’ll figure out what to do next once they’re sure they know why they measured this increased friction, Smith predicted. However, they do plan to recover from this.