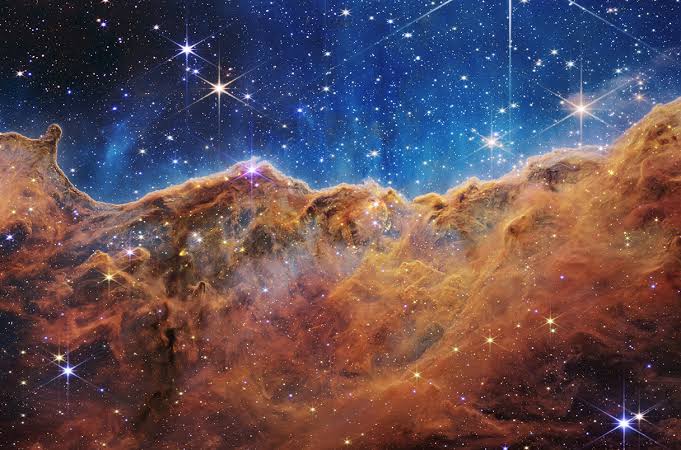 The James Webb Space Telescope’s (JWST) amazing first images of our universe have made an exciting week for all of us.

We can see faint faraway galaxies as they were more than 13 billion years ago in images like the one below.

It’s the ideal moment to take a step back and be grateful for both our first-class seat on the cosmic elevator and the ability these photos give us to travel across time.

These images also bring up intriguing questions on how the cosmological scale of distance measurement is affected by the expansion of the Universe.

Although it may seem weird to think about seeing back in time, space researchers do it every day.

The speed of light is one of the most well-known of the physics “rules” that govern our universe. And when we refer to “light,” we actually mean all of the electromagnetic spectrum’s wavelengths, which move at a staggering speed of around 300,000 kilometres (186,400 miles) per second.

Light moves so quickly that it seems to happen instantly in our daily lives. It still takes some time to reach anywhere in the cosmos, even at these incredible speeds.

The Moon appears to you as it did 1.3 seconds ago when you stare at it. Even though it’s a very brief glimpse into the past, it’s still the past. The only difference is because photons (light particles) emitted from the Sun’s surface take slightly longer—over 8 minutes—to reach Earth.

The Milky Way, our galaxy, is more than 100,000 light-years across. And the lovely young stars visible in the Carina Nebula image from the JWST are located 7,500 light-years away.

In other words, the historical period represented by this nebula is around 2,000 years earlier than the time when ancient Mesopotamia is supposed to have developed the first form of writing.

Looking Far In The Depths Of The Universe.

We are constantly looking away from the Earth and towards the past, at how things once were. Astronomers can utilise light, as it has been observed over time, to try to piece together the puzzle of our Universe, which is a superpower.

How Amazing Is JWST?

What makes JWST so amazing Space-based telescopes enable us to view specific light spectrums that are blocked by the Earth’s thick atmosphere. The ultraviolet (UV) and visible portions of the electromagnetic spectrum were both used in the construction and optimization of the Hubble space telescope.

The JWST was built to operate with a variety of infrared wavelengths. And this is a significant factor in why the JWST can go further into the past than Hubble.

How Different Types Of Waves Are Important?

Gamma rays, radio waves, and all other wavelengths on the electromagnetic spectrum are all emitted by galaxies. All of them provide crucial details about the many mechanics operating in a galaxy.

Since the light from nearby galaxies hasn’t altered much since it was first released, we can examine a wide variety of these wavelengths to learn more about what’s going on inside of them.

But we no longer have that luxury when galaxies are very far away. The expansion of the Universe has caused the light from the farthest galaxies, as we perceive it now, to be stretched to longer and redder wavelengths.

How Has The Expansion Of Our Universe Made It Difficult For Observation?

As the Universe has expanded, some of the light that would have been visible to our senses when it was first released has lost energy. Currently, it is located in a totally different area of the electromagnetic spectrum. This is a cosmological redshift phenomenon.

The JWST excels most in this area. JWST is able to observe galaxies that Hubble has never been able to because of the wide range of infrared wavelengths it can detect. The JWST has the largest mirror and best pixel resolution in the known universe, which when combined with this capability makes it the most potent time machine.

Is There Difference Between Light Age And Distance?

Light age and distance are not equal.

This mismatch, which makes operating on a very big scale challenging, is entirely due to the expanding Universe.

Why Is The Universe Continuously Expanding?

The Universe is growing due to something called dark energy. It is believed to be a universal constant that operates uniformly over all of space and time.

And the impact of dark energy on the expansion of the Universe increases with its size. Because of this, the universe is actually 13.8 billion light-years across despite being 13.8 billion years old.

On a galactic scale (inside the Milky Way), we are unable to observe the impact of dark energy, but we can do so across much longer cosmological distances.

We are in an amazing technological era. We weren’t aware that there were galaxies outside of our own until just a century ago. Now that we know there are trillions, we have an abundance of options.

The JWST will continue to lead us on weekly trips through space and time for the foreseeable future.