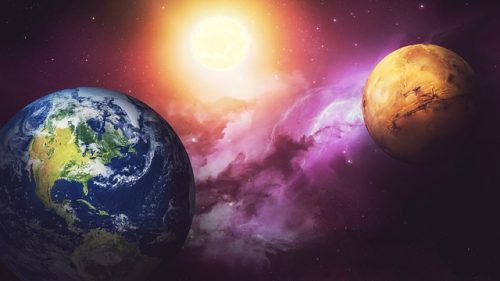 For as long as mankind has been looking at the skies, we’ve been interested in the notion that other worlds, much like Earth, might contain living things.

Our visits to the Moon showed us that it is completely infertile and uninhabitable whereas other worlds in our Solar System still have full potential and reasons to be explored. Venus might have life on its cloud-tops.

Europa and Enceladus might have the possibility of life in its sub-surface ocean of liquid water. Even Titan’s liquid hydrocarbon will be a fascinating place to find exotic living organisms.

But by far, the most fascinating possibility for searching for living organisms is the red planet: Mars..

Read: What will the first human settlement on Mars be like?

Why Is Mars So Unique?

The red planet, Mars, is by far the most intriguing possibility. This smaller, colder, farther away cousin of Earth had a wet past, with liquid water flowing on the surface for more than a billion years.

Circumstantial evidence has pointed to the possibility of life on Mars, not only in the distant past, but also possibly still alive and active today. There are five different scenarios for life on Mars. So far, here’s what we know.

We’ve discovered a host of exciting discoveries on Mars thanks to data collected by numerous orbiters, landers, and rovers. On the Martian surface, we discover dried-up riverbeds and signs of old glacial periods.

What Are The Things Discovered On Mars?

On Mars, we discovered microscopic hematite spheres as well as abundant evidence for sedimentary rock, both of which only occur in watery settings on Earth. On Mars, we’ve seen solid subsurface ice, snow, and even frozen surface water in real time.

Although the result is still debatable, we’ve seen what appears to be briny surface water actively streaming down the walls of several craters.

Early Mars had all of the fundamental elements for life that we have on Earth, including a dense atmosphere and liquid water on its surface.

What Are The Evidences Of Life On Mars?

Although Mars does not appear to be teeming with life today, there are three pieces of evidence that suggest past or perhaps current life could exist.

Assumptions About The Existence Of Life On Mars

There are five options for the history of life on Mars when we consider the entire body of data – all we’ve learned about Mars.

Read more: What happen if we successfully terraform mars?

Here’s what each option would imply

1.) There was no life on Mars. Despite having the same basic materials as early Earth and similar, wet climates, the required conditions for life to emerge on Mars just never existed.

All inorganic geological and chemical processes continued to occur, but nothing organic. The Sun then took Mars’ atmosphere away a little more than three billion years ago, drying out any liquid surface water and resulting in Mars’ current look.

This is the most cautious approach, and it would necessitate inorganic or contamination-based resolution for all three alleged “positive” tests. This is entirely plausible and, in many people’s minds, the default assumption.

This will likely remain the leading hypothesis until persuasive evidence emerges that strongly suggests either past or existing life on Mars.

2.) Early on in its history, Mars had life, but it perished. This scenario is similar to the last one in many ways. It’s not difficult to envision a world where:

A thick atmosphere similar to early Earth’s, stable, liquid water on its surface, continents with vast geological diversity, volcanoes, a magnetic field, a day similar to ours in duration, and temperatures just marginally cooler than Earth’s current.

It’s possible that this will result in life. Given that life developed on Earth only a few hundred million years after its formation, many people find it difficult to believe that these conditions wouldn’t lead to life after more than a billion years.

Read: Could We Actually Survive On Mars? The Real Problem Living on Mars

3.) Mars formerly had life, and it still exists beneath the surface mostly in a dormant state. This is the most optimistic, yet scientifically feasible, scenario for life on Mars.

Perhaps life began early on Mars, and when the planet’s atmosphere was gone, a few extremophiles remained frozen in time. Life “wakes up” and begins executing its fundamental biological tasks when the correct conditions occur — possibly underground, where liquid water can occasionally flow.

If this is the case, life may still be found beneath the Martian surface, possibly in the shallow sands just a few feet or even inches beneath our spacecraft.

We’re probably simply talking about single-celled life here, perhaps not even reaching the complexity of a eukaryotic cell, but life on any planet other than Earth would be a scientific revolution.

NASA’s Perseverance rover, which successfully launched on July 30, 2020, will collect key soil samples to try to evaluate this hypothetical situation, however no results have been reported yet.

Read: Here’s What Elon Musk Said When Questioned About The Life on Mars?

4.) Life did not exist on Mars until it was organically seeded by Earth. An extremely massive, fast-moving body slammed Earth 65 million years ago, forming Chicxulub crater and kicking up enough material to envelop the Earth in a cloud of debris, resulting in Earth’s fifth mass extinction.

And, like many other big impacts, this one is likely to have kicked up small bits of Earth all the way into space, similar to how impactors on the Moon or Mars hurl meteors all throughout the Solar System, some of which eventually land on Earth.

It’s quite likely that Earth based organism made their way to Mars by any means and began reproducing there, whether or not they flourished.

Perhaps one day, we’ll be able to reconstruct the entire history of life on Mars and determine whether any of it descended from the same common ancestor as all present Earth life. It’s an intriguing option that’s difficult to dismiss.

5.) Our current space programme has brought life from Earth to Mars. Finally, until the start of the space era, Mars may have been a barren, lifeless planet – at least for billions of years.

Perhaps stowaways from spacecraft that weren’t completely decontaminated or sterilised crashed on the Martian surface, which came from the current earth life.

Can We Contaminate Mars?

It’s astrobiologists’ worst nightmare, there’s a rich history of life on another world to be discovered, but we’ll contaminate it with our own creatures before we ever learn the genuine history of life there. The Tesla Roadster, which was released in 2018, was also not fully decontaminated, posing a risk of biological contamination in a foreign environment.

What Would Happen If We Contaminated Mars?

In the worst-case scenario, simple Martian life could be surviving on Mars, but Earth life arrived and out-competed it, driving it to extinction. From a biological standpoint, this very real, healthy dread is why we’re often so cautious while exploring other planets and foreign places.

There’s a lot of hope that current and future generations of Mars rovers and orbiters will help us figure out whether Mars has ever hosted life, whether today or in the past.

However, scientists have no conclusive proof that life ever existed on Mars at this time. We have a few signals that could be markers of past or present life, but completely inorganic processes could explain all of the reported outcomes.

The only way to discover the truth, as always, is to do more and better science with better instruments and techniques. Following the collection of soil samples by NASA’s Perseverance rover, the samples will be returned to Earth for laboratory study.

If we succeed, we may be able to determine which of these five scenarios is most compatible with the facts about Mars within the next decade.

1 thought on “Is There Any Evidence of Life on Mars? Let’s Explore”