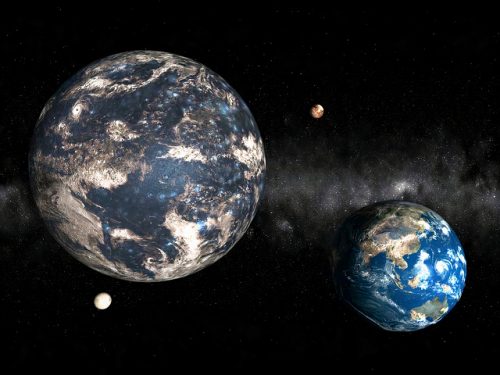 Finding unequivocal evidence of active life on a planet outside of our solar system is the ultimate objective of NASA’s exoplanet mission. The likelihood of life in the cosmos and our luck when we take those initial, hesitant, exploratory steps will determine how quickly that can occur.

Early planet-finding missions, like NASA’s Kepler and its extended version, K2, or the upcoming James Webb Space Telescope, may provide only rudimentary proof of the existence of possibly habitable planets.

James Webb, which was built in part to look into gas giants and super Earths, could uncover an oversized replica of Earth.

The Wide-Field Infrared Survey Telescope or NASA’s Nancy Grace Roman Space Telescope might focus on a faraway planet’s reflected light to find the signs of oxygen, water vapor, or some other potent evidence of potential life.

But if we’re not lucky, it can take years to look for signs of life. A more powerful imaging telescope will likely be necessary to find any additional blue-white marbles that may be tucked away in the star field like sand grains on the beach.

The next-generation planet finder, which will be launched into space in the 2030s or 2040s, is already in the design stage.

Professor Sara Seager of physics at MIT searches for potential chemical combinations that might hint at the existence of extraterrestrial life.

The six primary elements that make up life on Earth are carbon, nitrogen, oxygen, phosphorus, sulfur, and hydrogen. She and her biochemistry colleagues first concentrated on these elements.

“We need good fortune because there will be so few planets, according to Seager. I don’t want to overlook anything. I don’t want to miss it just because we couldn’t come up with a chemical.”

How Many Planets Are There That Are Similar To Earth?

According to NASA’s Exoplanet Exploration page, scientists have discovered more than 4,000 exoplanets since the first such planet was verified to be circling a sun-like star in 1995.

The NASA Kepler space observatory, which was deployed in 2009 with the goal of determining the prevalence of Earth-like planets throughout the Milky Way galaxy, is responsible for more than half of these findings.

A planet must be relatively tiny (and thus rocky) and orbit in the star’s “habitable zone,” which is broadly defined as a region where liquid water can exist on a planet’s surface. When telescope technology advances, other factors will be taken into account, such as the planet’s atmosphere and its parent star’s level of activity.

According to NASA’s Jet Propulsion Laboratory, this exoplanet is at least 4.5 times as big as Earth and is only 22 light-years away.

Although Gliese 667Cc completes one orbit of its host star in just 28 days, the exoplanet is believed to be in the habitable zone because its star is a red dwarf that is much cooler than the sun.

Gliese 667Cc, which was found using the 3.6-meter telescope of the European Southern Observatory in Chile, may circle too closely to the red dwarf, however, and could be roasted by flares.

According to a recent article from Space.com, Kepler-22b’s 290-day orbit is fairly similar to Earth’s 365-day orbit. The exoplanet orbits a G-class star, which is similar to our sun but smaller and colder than the sun that the Earth orbits.

Around 2,700 light-years away, Kepler-69c is nearly 70% larger than Earth. Researchers are unsure of its makeup once more as a result.

The planet orbits its sun once every 242 days, placing it in a position similar to Venus’ in our solar system. The host star of Kepler-69c is around 80% as bright as the sun, hence the planet seems to be in the habitable zone.

Kepler-69c is about 2,700 light-years away and is over 70% bigger than Earth. As a result, scientists are once again uncertain about its composition.

According to NASA, this planet is about 40% bigger than Earth and revolves around a star that is significantly cooler than the sun.

However, Kepler-62f is directly within the habitable zone thanks to its 267-day orbit. Kepler-62 orbits its red dwarf star more closely than the sun does to the sun, although the star emits much less light.

Given its distance of 1,200 light-years and size, Kepler-62f is in the neighborhood of potentially rocky planets that might have oceans.

While Kepler-186f receives only one-third as much energy from its star as Earth does from the sun, it is at most 10% larger than Earth and looks to be located in the habitable zone of its star, albeit on the zone’s periphery.

The red dwarf parent star of Kepler-186f prevents the alien world from being a real Earth twin. 500 light years separate Earth from the planet.

According to NASA, this exoplanet is 33 percent bigger than Earth and revolves around its star every 112 days. 2015 saw the announcement of the discovery of Kepler-442, a star 1,194 light-years from Earth.

One study discovered that this exoplanet might get enough light to support a substantial biosphere, which was published in the Monthly Notices of the Royal Astronomical Society in 2021.

The possibility that several planets would be able to perform photosynthesis was examined by the researchers. They discovered that the radiation Kepler-442b receives from its star is adequate.

According to NASA, this planet, whose discovery was announced in 2015, is the first near-Earth-size planet to revolve around a star the size of the sun.

Kepler-452b has a “better than even chance” of being rocky because it is 1.6 times the size of Earth. Located 1,400 light-years away from Earth, Kepler-452b. Kepler-452b orbits its star in just 20 days more time than Earth does.

Scientists found Kepler 1649 c after reanalyzing data from NASA’s Kepler space telescope. It was discovered that the exoplanet orbited in its star’s habitable zone and was around the same size as Earth.

According to NASA, a computer algorithm mistakenly recognised the astronomical body during the initial data collection from the telescope, but in 2020 it was found to be a planet.

According to NASA Exoplanet Exploration, Proxima Centauri b is the closest exoplanet to Earth and is only four light-years away. The exoplanet’s mass is 1.27 times greater than Earth’s. It was found in 2016.

The exoplanet is exposed to intense UV radiation while being near the Proxima Centauri star’s habitable zone. This is due to its short orbital period of 11.2 days and near proximity to its parent star.

Around the star The TRAPPIST-1 system contains more Earth-sized planets than have previously been found in a single star’s habitable zone. Seven planets make up this planetary system.

According to previous reports from Space.com, the majority of these planets’ water likely disappeared very early in the formation of the system.

But according to a 2018 study, some of these planets have the capacity to store more water than the oceans of Earth. The planet TRAPPIST-1e is regarded to have the greatest chance of supporting life as we know it.

How Much Possibility Is There To Find Another Earth In This Universe?

Nearly all of this data came from NASA’s Kepler mission, which has been our main resource for finding exoplanets.

Mercury’s transit, in which the innermost planet of our solar system briefly blocked the Sun’s light by moving in front of its disc, occurred yesterday.

The star’s brightness decreases during the beginning of a transit by the amount of its disc that is obscured, then rises once again after the planet departs.

Even though it is so slight, that apparent decrease in the star’s brightness gives us access to the same technique that Kepler employs to find planets around other stars. We can see this transit and find planets orbiting other stars when a planetary system is correctly oriented with a star in relation to our line of sight.

The Possibility Of Finding Another Earth

Over the course of almost four years, the Kepler spacecraft examined a field of view comprising about 150,000 stars, finding over 2,000 planets and over 1,000 more “likely planets” that are now awaiting confirmation.

The likelihood of a good planetary alignment with our line of sight is very low, and furthermore, we can only detect planets with orbital periods that are less than Kepler’s observing time, so nothing farther out than Mars is. This does not, however, imply that only 1% to 2% of stars have planets orbiting them.

We discover some astounding things when we contrast what we have observed with what we anticipate would exist in light of what is not visible yet.

The vast majority of planets are three times the size of Earth or smaller, not gas giant worlds, and it is predicted that there are roughly 60 billion rocky, habitable-zone planets in our galaxy alone. Around 80% of star systems are expected to have planets around them.

Exoplanets, or planets that orbit other stars, have been counted at about 4,900 in our galaxy, but there are undoubtedly trillions more. The idea of the “livable zone” is one of the best resources scientists have to start focusing their search for habitable planets. It is the distance from a star at which temperatures would permit liquid water to occur on the surface of a planet.

A steady star that is not prone to erupting in sterilizing flares would also be necessary, along with a planet of the right size and atmosphere. Really, the habitable zone is only a way to narrow the field and focus on the planets most likely to have favorable circumstances for life.

1 thought on “Is There Another Planet Like Earth With Humans?”